Okinawa on Wednesday marked the 76th anniversary of the end of a major World War II ground battle between Japanese and U.S. troops, with a memorial service downscaled for the second straight year due to the coronavirus pandemic.

Prime Minister Yoshihide Suga, who was not invited to the event amid the pandemic, called on people "not to forget the deep scars" left in the island prefecture, saying in a video message, "The peace and prosperity we enjoy (today) were built on the precious lives lost and an indescribably distressing history lived by the people of Okinawa." 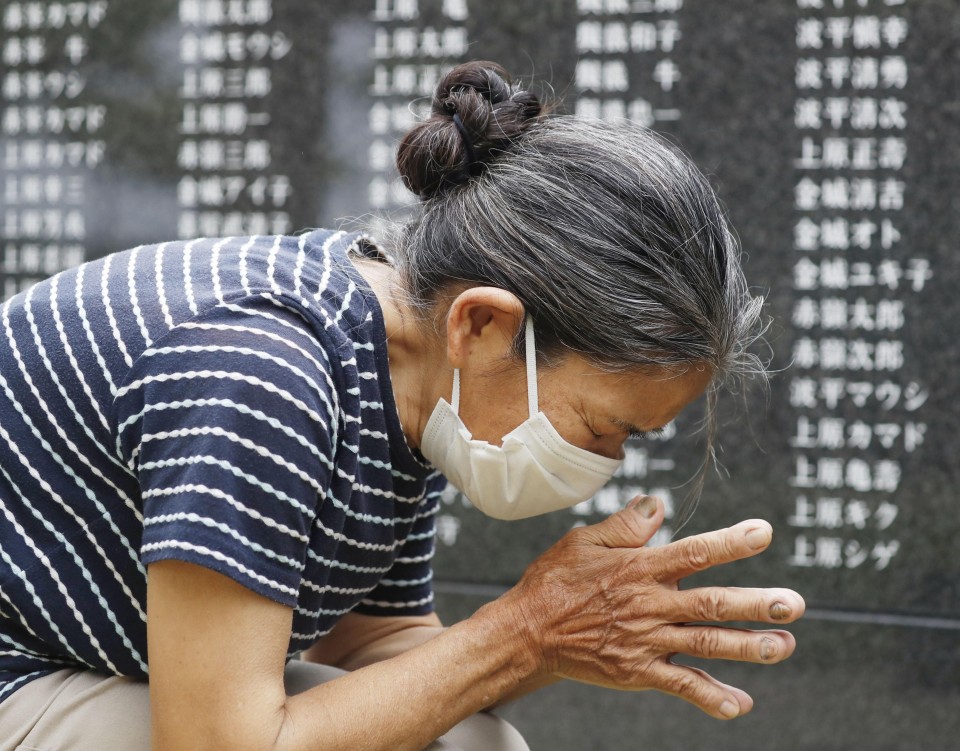 A woman prays in front of a wall engraved with the names of victims of the Battle of Okinawa on June 22, 2021, at the Peace Memorial Park in Itoman, Okinawa Prefecture.

The 1945 battle in the final phase of World War II claimed the lives of over 200,000 people, including civilians as well as Japanese and U.S. combatants.

Only 36 people including relatives of the dead attended the event at the Peace Memorial Park in Itoman, the site of the final stage of the Battle of Okinawa, drastically lower than the around 5,000 participants seen before the pandemic. Last year, about 160 people took part in the ceremony.

In a "peace declaration" made at the ceremony, Okinawa Gov. Denny Tamaki underlined the continuing burdens on the island prefecture from hosting the bulk of the U.S. military presence in Japan, pointing to "crimes and accidents related to American troops."

The prefecture constitutes around 0.6 percent of Japan's total land area but hosts 70 percent of the total acreage exclusively used by U.S. military facilities in Japan.

Acknowledging the burden on the people of Okinawa, Suga said in his message, "We need to change the current situation by any possible means."

Tamaki urged the central government to collect the remains of the war dead, as well as unexploded shells buried under the soil in different parts of the southern prefecture.

Around 94,000 civilians, about a quarter of Okinawa's population at the time, as well as over 94,000 Japanese soldiers and about 12,500 U.S. troops died in the fighting from March through June 1945, according to the Okinawa prefectural government.

This year's anniversary comes as the local and central governments remain split over the planned relocation of U.S. Marine Corps Air Station Futenma from a crowded residential area in Ginowan to the less densely populated coastal district of Henoko in Nago, both in Okinawa.

Tamaki said next year will mark the 50th anniversary of Okinawa's reversion to Japan from U.S. control and urged both the Japanese and U.S. governments to set up a dialogue body involving the prefecture to discuss the Futenma base relocation plan.

Despite strong local opposition, the central government has been pushing forward with land reclamation for the planned base transfer based on a 1996 Japan-U.S. accord on the return of the land occupied by the Futenma facility.

Okinawa remained under U.S. rule until 1972, even after Japan regained sovereignty in 1952 following its defeat in World War II.

This year, the names of 41 people were added to the list of the war dead inscribed on the Cornerstone of Peace in the Itoman park, bringing the total to 241,632. The list covers all the war dead, irrespective of nationality or their civilian or military status.

U.S. military helicopter lands on small island away from Okinawa base