North Korean leader Kim Jong Un said an unspecified "great crisis" related to the coronavirus pandemic that may jeopardize the safety of the country and its citizens has occurred, the state-run Korean Central News Agency reported Wednesday.

At a meeting of the ruling Workers' Party of Korea on Tuesday, Kim also sacked senior party members, KCNA said, adding they "neglected the implementation of the important decisions" on the "prolonged state emergency epidemic prevention campaign." 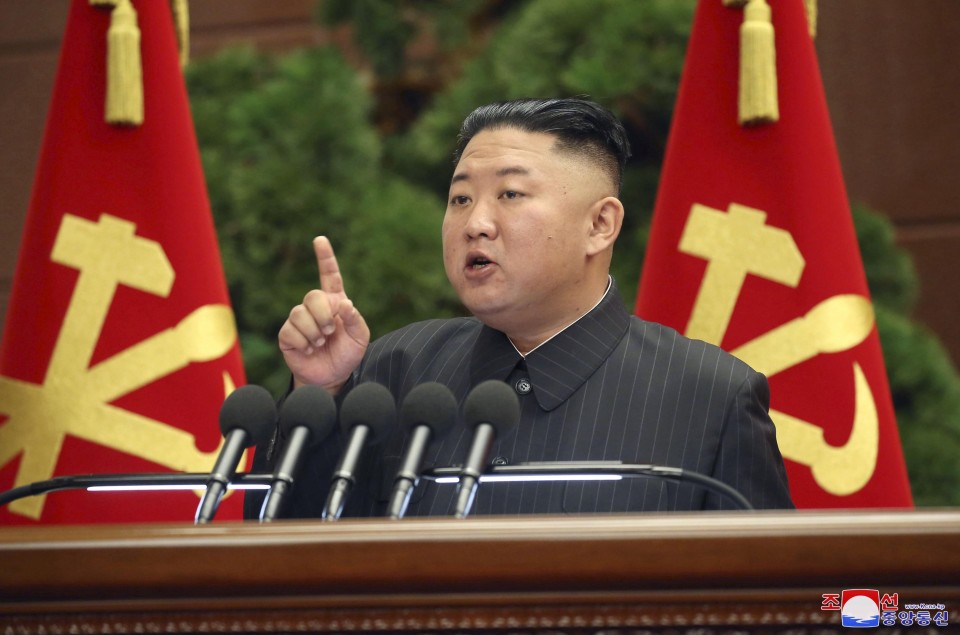 North Korean leader Kim Jong Un gives a speech at a meeting of the ruling Workers' Party of Korea on June 29, 2021. (KCNA/Kyodo)

Pyongyang claims it has spotted no coronavirus infections at home, but the United States, South Korea and Japan might try to collect information about whether an infected case has been confirmed in the North for the first time, foreign affairs experts say.

Kim was quoted by the news agency as saying at the gathering that a major factor "hindering the implementation" is "the lack of ability and irresponsibility of cadres."

Senior party officials faced "sharp criticism" at the meeting, KCNA said, but it did not report those who were removed.

North Korea's economy, meanwhile, has been languishing with the global spread of the virus choking trade with China, while its agricultural sector was also devastated by powerful typhoons and flooding last year.

China is North Korea's closest and most influential ally in economic terms. North Korea depends on China for more than 90 percent of its trade.

It is rare for Pyongyang to use the expression "food crisis" when describing the state of the nation, sparking concern that its citizens have been encountering serious difficulties in obtaining daily necessities.

North Korean watchers have recently said Kim seems to have lost a significant amount of weight. However, it is unknown whether he has gone on a diet or is sick.

On Friday, a North Korean male resident said during an interview with the official television, "Seeing the respected General Secretary looking emaciated, we, the people, were heartbroken," referring to Kim's formal title in the ruling party.

Such an unusual report pointing out his health condition indicates Kim's intention to give the impression to the country's citizens that the supreme leader has been struggling to tackle the current challenges with them, the watchers said.

Following the detection of the virus in the central Chinese city of Wuhan in late 2019, North Korea, in principle, cut off traffic to and from China and Russia in early 2020.

In July last year, however, the news agency said a person who defected to South Korea a few years ago "illegally" returned to the North Korean border city of Kaesong and is "suspected to have been infected with the vicious virus."

State-run media did not announce whether the person was definitively diagnosed as being infected with the COVID-19 virus.

Late last year, North Korea reportedly shut down Hyesan on the border with China and the western city of Nampo, which has the nation's biggest port, while banning people from entering Pyongyang from other cities.

Border guards in Hyesan are believed to have been engaged in smuggling with Chinese contacts. Some people, including a local official, appear to have been executed for their alleged role in the smuggling operation.

Party, central and municipal government officials took part in the latest gathering on Tuesday. Photos run Wednesday by the Rodong Sinmun, the newspaper of the ruling party, showed participants not wearing face masks.

Kim Yo Jong, Kim Jong Un's younger sister and close aide, also made a speech at the meeting.

North Korea is particularly vulnerable to infectious disease outbreaks due largely to chronic shortages of food and medical supplies caused by international economic sanctions aimed at thwarting its nuclear and ballistic missile ambitions.

G-7 leaders to up pressure on Russia, keep eye on assertive China

G-7 leaders to up pressure on Russia, keep eye on assertive China