Japanese Prime Minister Yoshihide Suga on Friday expressed his strong resolve to go ahead with the Tokyo Olympics next month despite concerns over the coronavirus pandemic, urging the Group of Seven countries to send athletes to the games, a government official said.

"We will make preparations toward a safe and secure Tokyo Games, putting in place all steps to prevent the spread of the virus," Suga was quoted as saying during the G-7 summit, adding, "I would like you to send strong teams, with expectations that the world's top-level athletes will show their best performances." 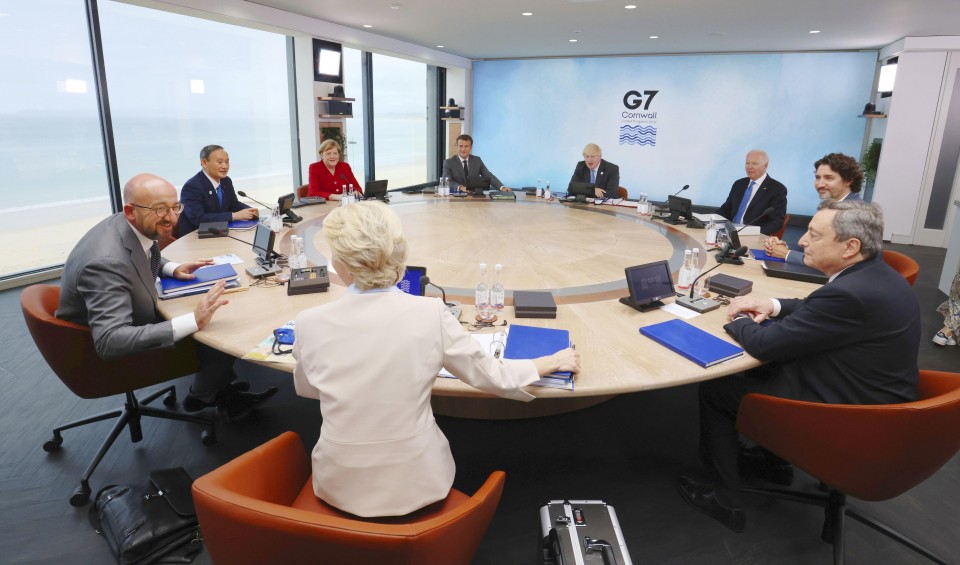 Group of Seven leaders are pictured during their first-day meeting in the seaside resort of Carbis Bay, Cornwall, England, on June 11, 2021. (Pool photo)(Kyodo)

The G-7 leaders responded with "warm smiles on their faces," which signaled their support for the Tokyo Olympics and Paralympics, the official explained.

He also said one member expressed confidence in the success of the event, which is due to open on July 23, a year after the original schedule due to the spread of the novel coronavirus.

In its ongoing struggle to turn public opinion in favor of the games, the Japanese government has been hoping the G-7 will offer backing for the Olympics in its joint statement to be released when the three-day summit ends on Sunday.

Tokyo and some other areas of the country have been placed under a coronavirus state of emergency through June 20, while media polls have shown that a large majority of Japanese people are concerned about further spread of the virus and oppose going ahead with the Olympics, following the unprecedented postponement of the games last year.