When Tokyo celebrated its Olympic bid win in 2013, small souvenir store owners across the country joined the party with an eye on the windfall they expected the games to bring. Eight years and one pandemic later, they are only counting the cost.

In addition to a one-year postponement of the games, the coronavirus pandemic has forced the Japanese government to bar overseas spectators from entering Japan, leaving store owners anxious to know whether anyone in the Japanese capital will want to buy their Olympic and Paralympic-themed wares.

Keiji Kojima, a souvenir wholesaler near Tokyo, said sales have fallen sharply since the outbreak of the virus more than a year ago, and he is not expecting an uptick from the Summer Games. 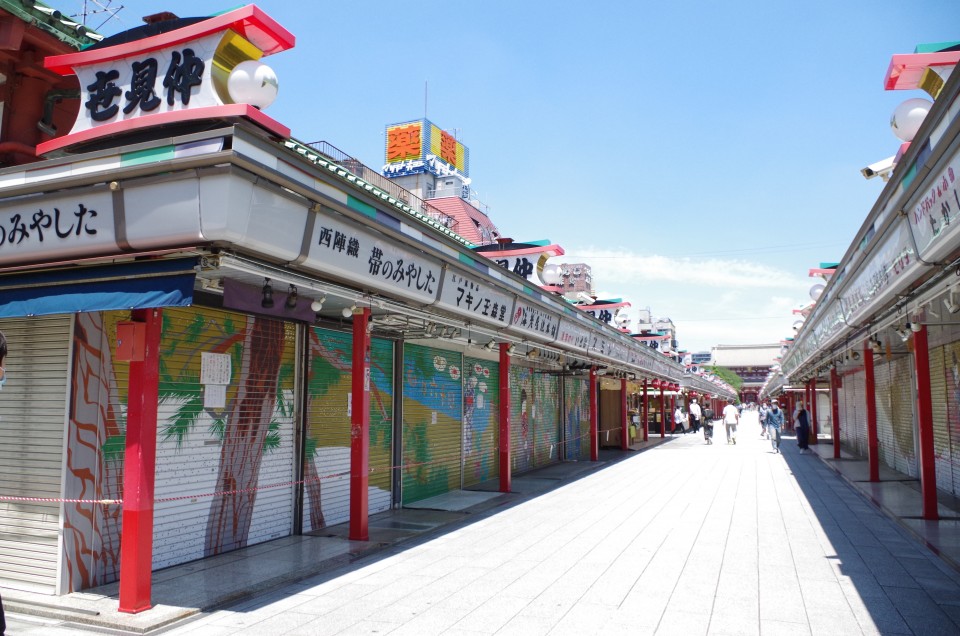 Just a few people walk by closed stores on the Nakamise shopping street in Tokyo's Asakusa area on May 26, 2021. (Kyodo)

"Looking back a couple of years, who expected the current situation?" he asked. "I am sure that many souvenir shops and wholesalers are disappointed and struggling now."

Kojima distributes to retailers in Tokyo and other areas of Japan traditional wooden Japanese dolls, among other goods, targeted at tourists. Right now, though, his order book is empty.

"I don't know if it is good to hold the Olympics in terms of the prevention of virus outbreaks, but it is still better for my business if the games are held," he said.

The vast majority of the small trinket and food stores on an iconic pedestrian street leading up to Sensoji, a famous Buddhist temple in Tokyo's Asakusa area, were closed while the capital was under a COVID-19 state of emergency for most of 2021.

"I stocked a lot of products that foreign tourists may like to buy in anticipation of the Olympics, but now they are piled up in storage," said a gift store owner in his 40s who is usually swamped with shoppers in the area, one of Tokyo's must-see destinations. 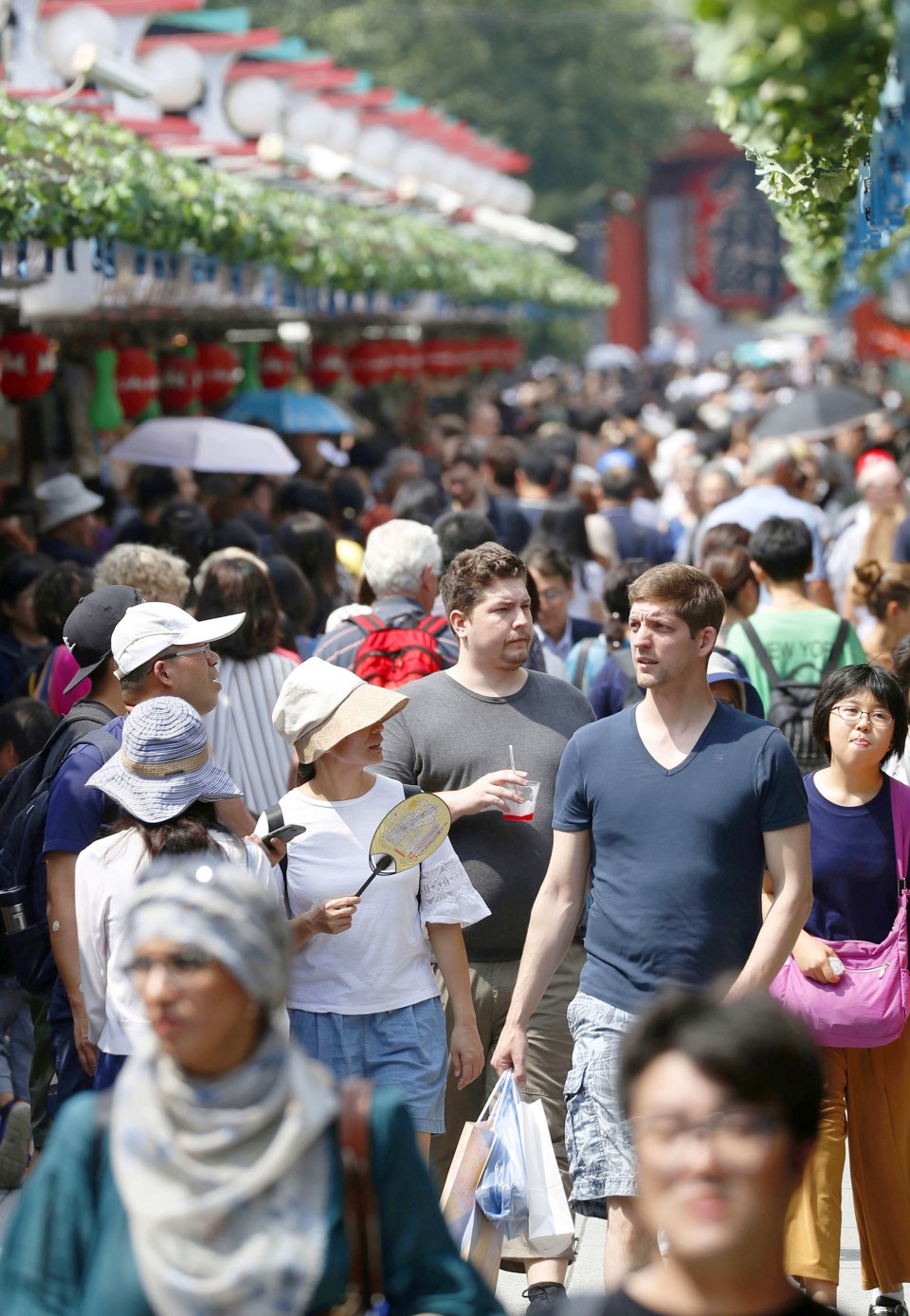 Photo taken on July 17, 2019, shows the Nakamise shopping street in Tokyo's Asakusa area packed with people including foreign tourists before the outbreak of the novel coronavirus. (Kyodo)

During the most recent emergency declaration that was effective from April 25 to Sunday, Nakamise shopping street was largely empty, with the few visitors there mostly unable to buy the keyrings, chopsticks and traditional crafts usually available from dozens of small vendors.

The shop owner, who declined to be named, said almost none of the official Olympic licensed goods with popular Japanese manga and anime characters printed on them he stocked were yet sold.

"I wonder if anyone will actually buy them in the future," the man said in his shop, where other items ranging from T-shirts and magnets to mugs were displayed.

He has also printed unofficial logos such as "Tokyo 2020" and kanji designs on T-shirts and hats of his own, hoping they might draw the eye of cashed-up foreign visitors.

The store owner said in preparation for the foreign influx, he almost doubled his stock of clothing as compared to pre-pandemic levels. Due to the downturn in his business, he was forced to terminate a contract for one of his warehouses in Asakusa, moving the boxes full of souvenirs to his family home outside Tokyo instead.

"It's already a problem for my business that no spectators from overseas are allowed in the Tokyo Olympics. To make matters worse, I don't even know if people in Japan will be allowed to travel for the games," said the man, who is considering starting a new endeavor just to make ends meet.

Before the postponement of the games was announced in March last year, he decided to open another souvenir shop at a new complex connected to Haneda airport's international terminal in Tokyo. 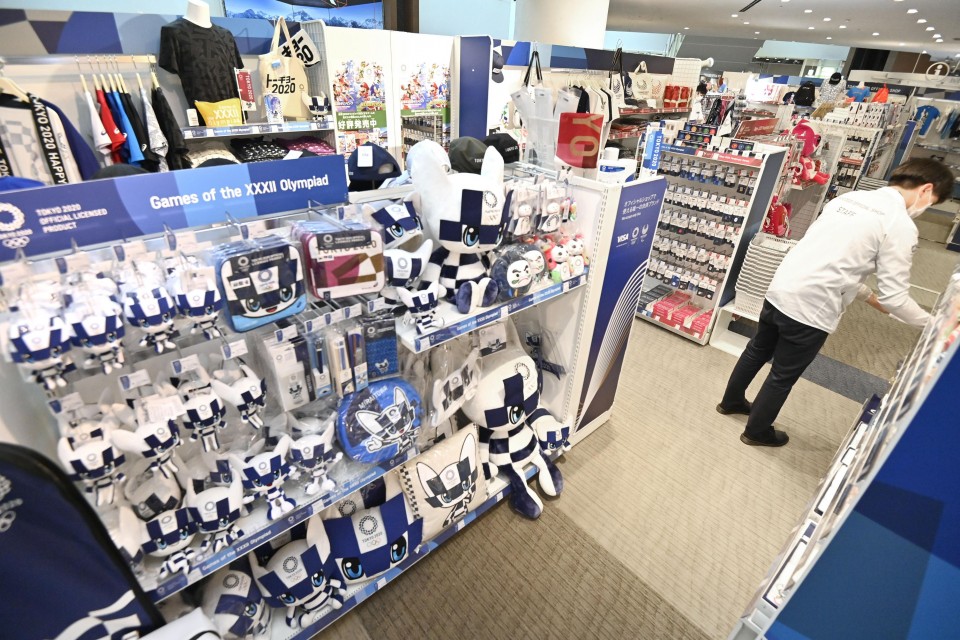 But, in yet another blow to his financial prospects, the scheduled opening of the mall was put off as international traveler numbers plummeted during the pandemic.

Like elsewhere in the world, Japan's tourism industry has been hit hard, making the government's goal to attract 40 million visitors from overseas in 2020, up from a record 31.88 million in 2019, out of the question. Whether the longer-term ambition of drawing 60 million visitors in 2030 is realistic in a post-pandemic world remains to be seen.

Foreign visitors to Japan last year plunged about 87 percent from a year earlier, the biggest drop since comparable data became available in 1964, to about 4.12 million.

With almost no foreign visitors and general discontent and opposition to the games rising, demand for official merchandise has waned.

Of 89 official merchandise stores set up in major shopping complexes across Japan last year, 30 have been closed either temporarily or permanently as of June 9.

It is in this atmosphere that discount store operator Kimble Corp., headquartered in Aichi Prefecture, decided to start buying up overstocked unofficial Olympic-related items.

Spokesman Jo Horiuchi said the company has been snapping up bargain-priced Olympic merchandise from businesses, including retailers and hotel operators across the country, in hopes that he will be able to turn a profit.

Horiuchi said he was "overwhelmed" to have received inquiries from many companies, reflecting that there are many companies who were expecting to cash in on the games, riding the wave of the country's games-driven economic growth and lofty tourism targets.

But now, they are looking to cut their losses, and Horiuchi is stepping in.

"At least they can recoup money from selling their items to us, rather than just throwing them away or keeping them in storage," he said.