Japan overcame a tough challenge in their first game since the 2019 Rugby World Cup to beat the Sunwolves 32-17 on Saturday.

The warm-up game for Japan's upcoming matches against Ireland and the British and Irish Lions, pitted Jamie Joseph's Brave Blossoms against Japan's former Super Rugby franchise, who led 14-3 at halftime. 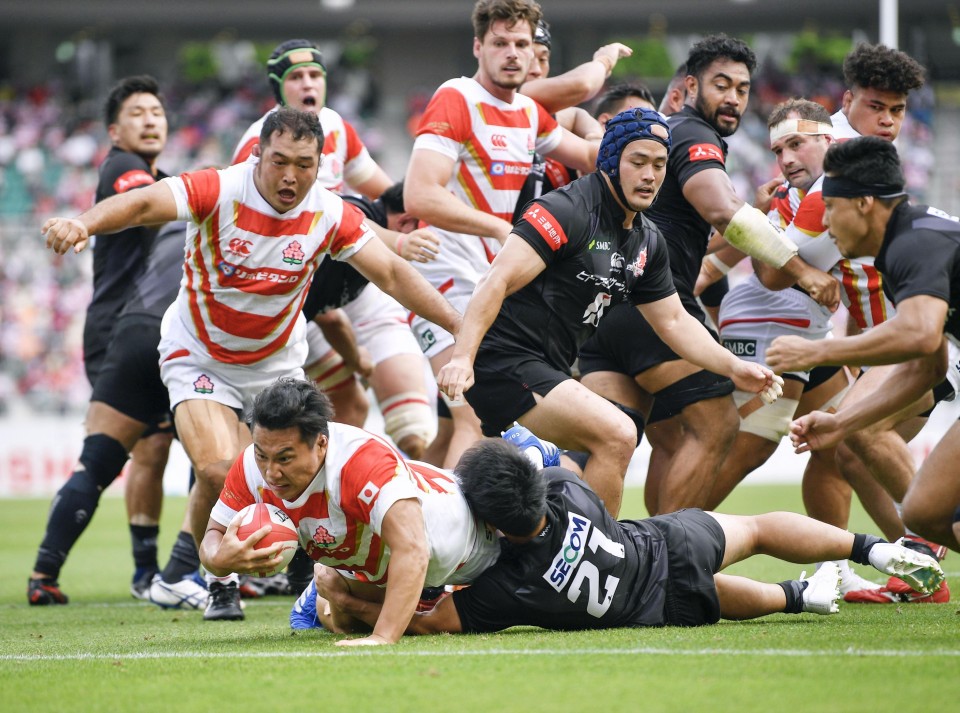 Kosuke Horikoshi (lower L) scores one of his two second-half tries for Japan's national rugby team, the Brave Blossoms, in their 32-17 win over the Sunwolves at Shizuoka Prefecture's Ecopa Stadium on June 12, 2021. (Kyodo)

Four second-half tries, two by substitute Kosuke Horikoshi and one each by Ryoto Nakamura and Tevita Tatafu, eventually made the difference.

The Sunwolves, reconstituted for this match, were a constant threat at the breakdown and dominated the first 50 minutes at Shizuoka Prefecture's Ecopa Stadium, the site of Japan's memorable World Cup win over Ireland.

But Horikoshi's first from a rolling maul opened the flood gates in the 60th minute as Japan finally got going.

A pin-point 65th-minute pass along the try line from Naoto Saito allowed Nakamura to dive between two defenders and score Japan's second try.

Rikiya Matsuda, a 51st-minute substitute, kept the Sunwolves pinned back in their own half with his kicking and supplied both of the conversions to make it a 17-14 game. Tatafu and Horikoshi added two more tries in the final 10 minutes to turn what once looked like an upset into a rout.

"They played Sunwolves-style rugby, and it felt like we were under pressure for the entire 80 minutes," Japan captain Michael Leitch said.

"In order to play our style of rugby, we need to take care of business at the breakdown, so today was a good lesson for us and gives us some things to work on that will help in our preparations."

Koki Arai scored the Sunwolves' opening try in the 19th minute, diving on a loose ball in the in-goal area after a Takuya Yamasawa kick into space down the left flank created chaos among the Japan backs.

The Panasonic Wild Knights fly-half then kicked the extras from near the touchline.

Although the Brave Blossoms had the bulk of early possession, the national team struggled to cope with opponents who were their equals in tackling and playing unstructured rugby.

The Brave Blossoms eventually began to put things together, resulting in Yu Tamura's 31st-minute penalty. But the Sunwolves aggressive play at the breakdown disrupted Japan's attack and prevented Joseph's men from turning possession into points.

Instead, the Brave Blossoms got a taste of their own medicine with the slashing runs from inside passes that have been their own bread and butter. A strong run by Suntory Sungoliath back Seiya Ozaki and a defensive lapse by Japan allowed Wild Knights wing Koki Takeyama to receive a pass in space on the flank and waltz over the try line. Yamasawa added the extras to send the Sunwolves into the changing rooms with a 14-3 lead.

But after 50 minutes of being outworked, the Brave Blossoms began to settle down and assert themselves in all phases of the game.

The Brave Blossoms will play the British and Irish Lions in Edinburgh on June 26, and then play Ireland in Dublin on July 3.

"The Lions are the Northern Hemisphere's best team so we've been doing our best to prepare, so we can go there and win," Leitch said.