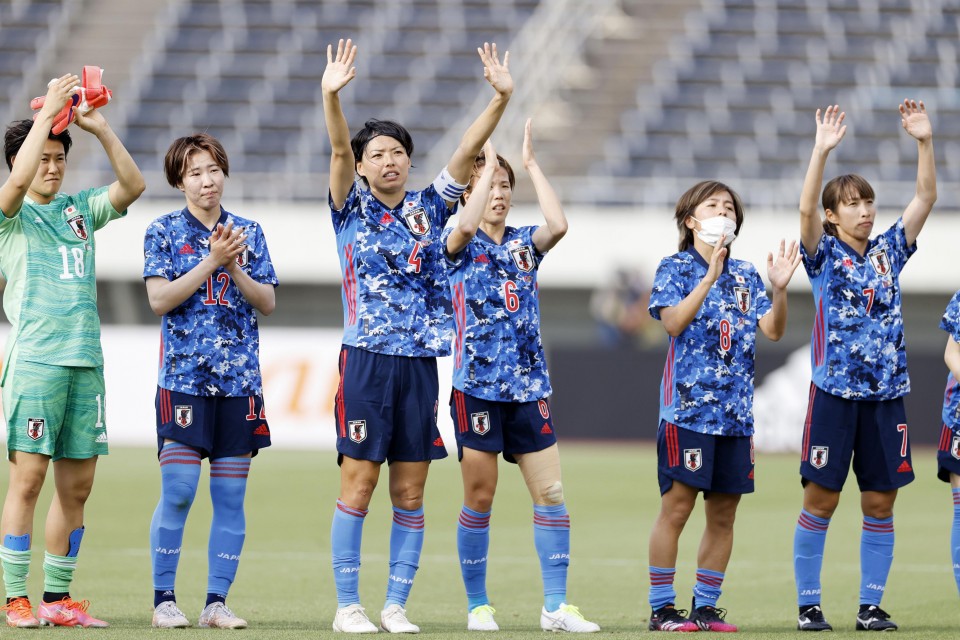 Japan's women's national team players wave to supporters after thrashing Ukraine 8-0 at Edion Stadium in Hiroshima in a warm-up for the upcoming Tokyo Olympics. (Kyodo)

TOKYO - The Japanese government decided Thursday to lift the COVID-19 quasi-state of emergency in three prefectures after this weekend, having deemed infections are steadily declining and the strain on hospitals has eased.

Restrictions in Gunma, Ishikawa and Kumamoto, including a ban on restaurants serving alcohol and requiring them to close by 8 p.m. as well as a 5,000-person attendance cap at events, will be lifted at the end of Sunday as scheduled.

BEIJING - China passed legislation to retaliate against foreign sanctions, state-run media reported Thursday, as the country's tensions with the United States and other democratic nations have been escalating over human rights and security issues.

The move comes as the leaders of the Group of Seven countries, including the United States, France and Japan, are scheduled to gather in Britain later in the day and are expected to discuss how to tackle China's growing security and economic assertiveness.

PLYMOUTH, England - The U.S. government said Thursday it will purchase and donate 500 million doses of Pfizer Inc.'s coronavirus vaccine to more than 90 lower-income countries and the African Union, an announcement that came just ahead of the Group of Seven summit meeting in Britain.

The United States hopes the move will spur a coordinated vaccination effort via cooperation between the world's wealthy democracies, the White House said, apparently in a bid to counter so-called vaccine diplomacy by China and Russia, which it has labeled as autocracies.

Suu Kyi, who now faces seven charges including breaking the Official Secrets Act, is accused of illegally accepting $600,000 and gold as well as misusing her authority in renting land and a building, according to the report by the state-run Global New Light of Myanmar.

TOKYO - The government said Thursday it has decided to ban planes operated by any Belarusian airline from landing in Japan after the Eastern European country forced a civilian plane to land and arrested a dissident journalist on board last month.

TOKYO - Mana Iwabuchi and international debutant Yuzuho Shiokoshi each netted a brace Thursday as the Japanese women's national team thrashed Ukraine 8-0 in a warm-up for this summer's Tokyo Olympics.

Shiokoshi opened the scoring for Asako Takakura's side in the fifth minute of the friendly at Edion Stadium Hiroshima, netting from the middle of the area after Yuika Sugasawa stepped over a ball from Iwabuchi.

TOKYO - Japanese industrial conglomerate Toshiba Corp's general shareholders' meeting last year was not conducted in a fair manner, a group of lawyers concluded Thursday after an investigation requested by some foreign shareholders.

The lawyers said in a report that Toshiba sought assistance from the government in an effort to block proposals from foreign activist investors.