The Liberal Democratic Party is likely to become the largest force in the Tokyo metropolitan assembly election next month, seen as a prelude to a lower house election to be held this fall, a Kyodo News poll showed Sunday.

Currently, the biggest force is Tomin First no Kai, or the Tokyoites First party, founded by Tokyo Gov. Yuriko Koike. Whether the LDP along with the Komeito party can prevail over Tomin First is the focus of the July 4 election. 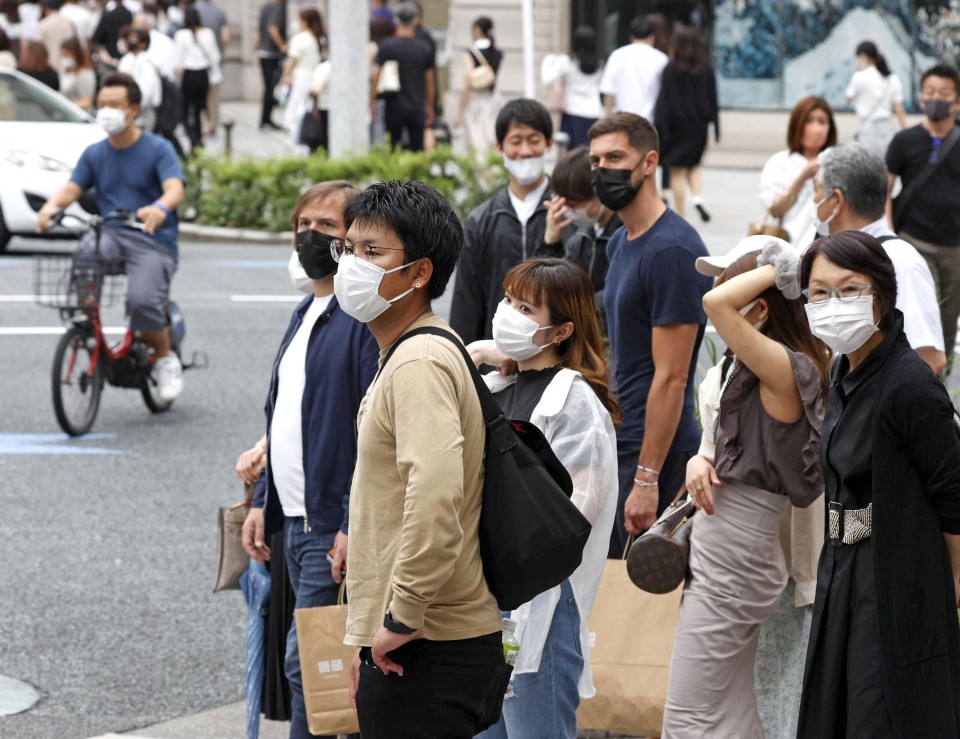 People listen to a candidate for the Tokyo metropolitan assembly election in Tokyo's Ginza district on June 27, 2021 (Kyodo)

According to a three-day telephone survey conducted from Friday on about 1,000 voters in the Japanese capital, 31.8 percent said they have decided to vote for the LDP or will most likely do so, while Komeito -- the LDP's junior coalition ally in parliament -- had the support of 14.1 percent.

The poll found that 12.1 percent favored Tomin First in the election. The regional party, which Koike now serves as special adviser, currently holds the most number of seats with 46 of the chamber's 127 seats.

The LDP and Komeito are the second and largest parties in the metropolitan assembly.

The Japanese Communist Party received support from 13.1 percent, meaning it and Komeito are gearing toward fighting Tomin First for second spot. The Constitutional Democratic Party of Japan had the support of 7.1 percent.

The outcome remains unpredictable, though, with undecided voters accounting for 58.4 percent, according to the survey.

On having spectators for the Tokyo Olympics starting in less than a month, 41.7 percent, or the highest among respondents, said the summer games should be held without spectators, while 29.2 percent called for canceling or rescheduling the games.

Those who said the policy is reasonable stood at 26.8 percent.

The respondents were asked about the recent decision of organizers that venues could be filled to 50 percent of capacity, up to a maximum of 10,000 spectators. The organizers, however, left open the possibility of a policy change if the situation of coronavirus infections in Japan worsens.

Even among supporters of the LDP and Komeito, more than half were opposed to having spectators in the global sporting event.

The poll found that 57.5 percent support Koike, while 34.9 percent said otherwise. Those who gave a poor evaluation of the metropolitan government's handling of coronavirus measures amounted to 51 percent, compared to 43.8 percent who said otherwise.

Among the issues they want the new metropolitan assembly to tackle, COVID-19 measures topped the list, followed by medical care and welfare issues, education and child-rearing, and employment.

The survey covered 1,375 selected households with eligible voters and obtained responses from 1,043 people.