Prime Minister Yoshihide Suga said Wednesday he aims to finish vaccinating Japan's population against COVID-19 by November, setting the goal as he looks to buoy his public support ahead of a general election later this year.

More than 40 million shots will be administered by the end of June ahead of the Tokyo Olympics, which will be held on a smaller scale and with measures to prevent infections, Suga said in his first one-on-one parliamentary debate with opposition leaders. 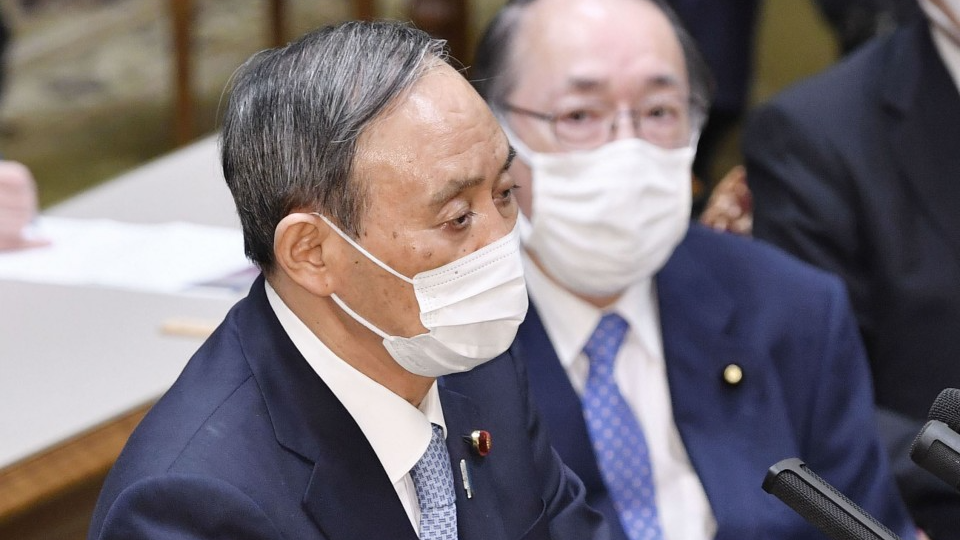 Prime Minister Yoshihide Suga speaks during a debate in parliament with party leaders on June 9, 2021. (Kyodo)

"We hope to complete all citizens who want to be vaccinated from October through November this year," said the prime minister, who took office last September.

Japan has a population of roughly 126 million, less than 4 percent of which had been fully inoculated as of Tuesday, a pace that is gradually picking up but still much slower than other industrialized nations including Britain and the United States.

The actual number of people eligible for shots in Japan is smaller, as Pfizer Inc.'s COVID-19 vaccine has been approved for use on people aged 12 and older, while Moderna Inc.'s has been cleared for ages 18 and up.

The rollout initially focused on health care workers and people aged 65 and older, who are especially vulnerable to severe symptoms, but is set to expand this month to people with underlying conditions such as diabetes as well as those with access to vaccination sites at their workplace or on university campuses.

"The situation has greatly changed since vaccines became available. We will do our utmost to administer shots," said Suga, who heads the Liberal Democratic Party.

The debate was the first since June 2019, with Suga facing off against Yukio Edano, leader of the main opposition Constitutional Democratic Party of Japan, who criticized him as lacking a sense of crisis in responding to the pandemic and prematurely lifting the previous state of emergency covering Tokyo and other areas.

"You cannot make up for lives once they are lost. Politics cannot take responsibility for lost lives, and the prime minister is not sufficiently aware of this," Edano said, calling for a change of government.

Suga did not say when he plans to dissolve the House of Representatives for a general election, reiterating that his priority is bringing COVID-19 under control.

The election must be held before the current terms of lower house members end in October, and the prime minister has previously said he will seek a mandate from voters before his own tenure as LDP chief ends in September.

But Suga's public support has fallen amid dissatisfaction with his pandemic response, with his Cabinet approval rating falling to 41.1 percent in a Kyodo News poll in May compared with 44.0 percent the previous month.

Suga, meanwhile, stuck to the script regarding next month's Tokyo Olympics, reiterating his determination to go ahead with preparations despite strong public opposition.

Nearly 60 percent of respondents in the May poll said the games, due to begin July 23 following a one-year postponement, should be canceled.

"I want to send out from Japan a message that the world has confronted the difficulties brought on by the novel coronavirus and overcome them by uniting," Suga said.

The prime minister said Japan will aim to further cut the number of Olympic officials, workers and press members from abroad to ensure the public's health and safety.

Japan has already halved the number from the initially planned 180,000.

Kazuo Shii, chairman of the Japanese Communist Party, questioned whether staging the games was worth the risk to public health, to which Suga simply replied, "Protecting the lives and safety of the people is my responsibility." 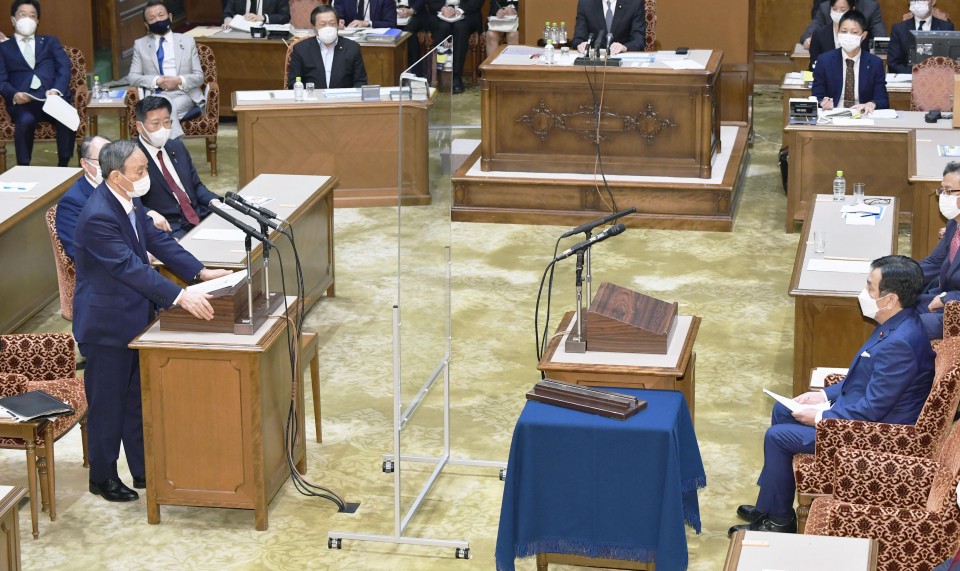