Japan under-24 claimed a comprehensive 4-0 win over Jamaica's senior side on Saturday, the final game for the Tokyo Olympic hopefuls before the 18-man squad announcement expected later this month.

Takefusa Kubo's 32nd-minute opener was the pick of the bunch, the 20-year-old cutting in from the right before rifling through the legs of three defenders and the goalkeeper for a memorable goal at Toyota Stadium in central Japan's Aichi Prefecture. 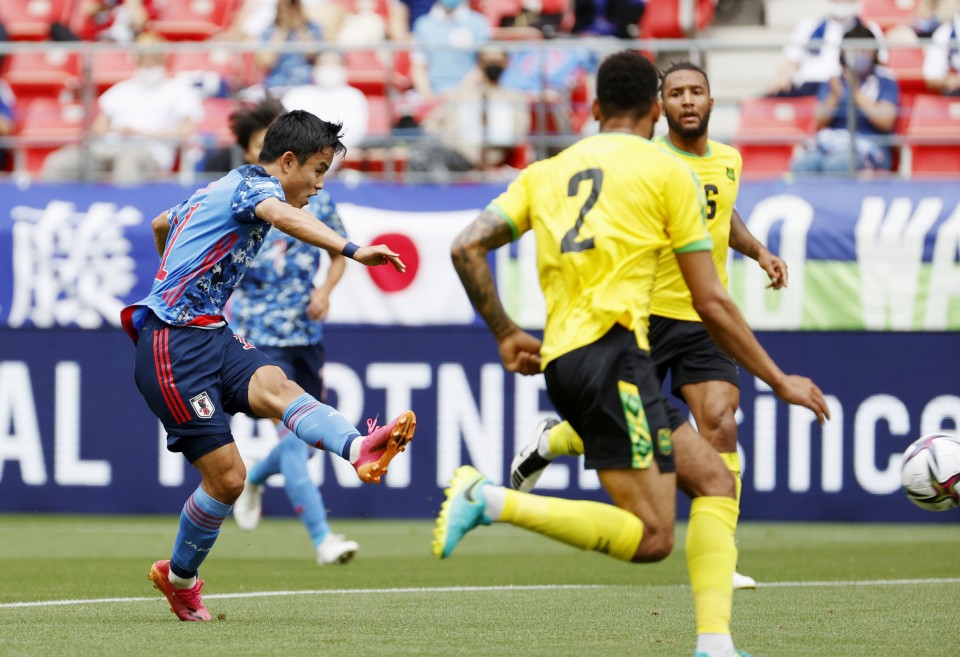 Japan under-24 Takefusa Kubo (L) takes a shot during a friendly match against Jamaica on June 12, 2021, at Toyota Stadium in central Japan's Aichi Prefecture. (Kyodo)

"What we can do is to prepare, there's nothing beyond that," said the playmaker as the staging of the Tokyo Games in the middle of the COVID-19 pandemic remains surrounded by questions. "I think our duty is to get ready in case they do go ahead."

The U-24s were facing the senior Jamaican side but dominated throughout, not allowing a single shot the entire game while peppering 17 of their own at the other end.

Kaoru Mitoma had a penalty shout turned down, Daizen Maeda and Reo Hatate both had efforts inside the area blocked before Kubo struck the near upright with a powerful effort from the edge of the box in the 20th minute as Japan started off positively.

Wataru Endo and Ritsu Doan also forced saves from Jamaica keeper Dillon Barnes before Kubo finally found the back of the net for the home side. The stunning effort arrived soon after a water break.

"I was told to be ready by (Hiroki) Sakai during the break, so it worked out well as a team," said Kubo. "I've been playing with Doan and have also seen how Mitoma plays in the J-League, so I was looking to adjust to their games (in attacking midfield)."

Endo, one of three all-but-confirmed overage players alongside Sakai and Maya Yoshida, added the second in the 42nd minute as he curled into the far corner from 20 meters out.

Wataru Endo (2nd from R) scores the second goal for Japan's under-24 side during the first half of an international football friendly against Jamaica's full national team on June 12, 2021, at Toyota Stadium in Aichi Prefecture, central Japan. (Kyodo) ==Kyodo

Half-time substitute Ayase Ueda rattled the bar from a tight angle six minutes after the break before the forward scored the team's third with a delightful chip in the 57th minute, following a marauding run and a perfectly weighted through ball from Mitoma.

Substitute Yuki Soma rounded the goalkeeper before setting up Doan's fourth in the 64th minute, while Koji Miyoshi came off the bench and looked to have scored a fifth after closing down Jamaica's substitute Jeadine White only for the keeper to just keep it from crossing the line.

The win came after a 6-0 victory over Ghana U-24 a week ago, and the strong outings are sure to leave manager Hajime Moriyasu with much to ponder ahead of his squad announcement.

Japan will face Honduras and Spain in July warm-ups before facing South Africa in their Tokyo Olympics opener on July 22. Japan will also face Mexico and France in Group A.