U.S. President Joe Biden on Saturday reiterated his support for Japan's plan to hold a safe Tokyo Olympics next month amid the coronavirus pandemic, as he briefly talked with Japanese Prime Minister Yoshihide Suga.

During their conversation on the sidelines of the Group of Seven summit in Britain, Biden offered his backing for the Olympics "moving forward with all public health measures necessary to protect athletes, staff and spectators," according to the White House. 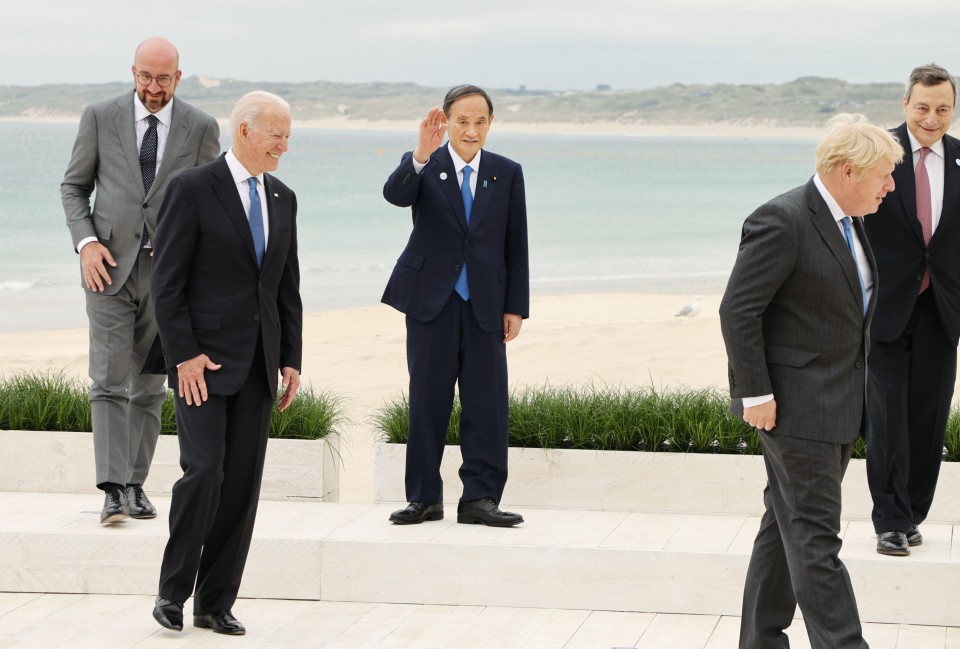 The two leaders also touched on issues including China, North Korea and preserving peace and stability across the Taiwan Strait, it said, without elaborating.

The Japanese Foreign Ministry issued a separate press release saying that their several rounds of conversation totaled about 10 minutes. But it did not mention discussion of the Taiwan situation, China's most sensitive territorial issue.

The two reaffirmed the importance of a "free and open" Indo-Pacific while agreeing to closely cooperate so that the G-7 can deliver "a powerful message" when the group wraps up its talks on Sunday, the ministry said.

Leaders from Britain, Canada, France, Germany, Italy, Japan and the United States plus the European Union have been discussing issues including the coronavirus pandemic response, ways to ensure a global economic recovery and initiatives to counter China's economic clout.

The Japanese government has been hoping the G-7 leaders will back Tokyo's plans for the Olympics and Paralympics in a post-summit communique, as it struggles to turn public opinion in favor of holding the games while the coronavirus continues to impact people's lives.

On the first day of the summit, Suga conveyed to his G-7 counterparts his strong resolve to hold the global sporting event and encouraged them to send "strong teams" in hopes of hosting a competition that features top-level athletes.

He reassured Biden on Saturday that adequate infection-control steps will be put in place to realize a "safe and secure" games, according to the ministry.

Suga and Biden last met in person in Washington in mid-April.

At the meeting in Washington, Suga confirmed with Biden "the importance of peace and stability across the Taiwan Strait." It marked the first time in 52 years that Japanese and U.S. leaders have mentioned Taiwan in a joint statement.

China regards the self-ruled democratic island as a renegade province to be reunited with the mainland by force if necessary. Concerns are growing over Beijing's military pressure increasing on Taipei.