All Nippon Airways Co. on Sunday began its COVID-19 inoculation program for employees at Tokyo's Haneda airport, moving up the schedule set by the government by more than a week and becoming the first Japanese firm known to start offering workplace vaccinations.

The government unveiled a plan earlier this month to allow companies and universities to administer coronavirus vaccinations on site from June 21 as Japan looks to accelerate the pace of its daily COVID-19 shots and expand eligibility to younger people.

ANA Holdings Inc., the parent of the major airline, had initially sought to begin on-site vaccinations from that day but was able to bring forward the plan in cooperation with the government. Japan Airlines Co. plans to begin inoculations at the Tokyo airport on Monday.

Japan's vaccination rollout was launched in February for health care workers and widened to people aged 65 or older in April, but with the start of the Tokyo Olympics only 40 days away, its vaccination rate remains low compared with other industrialized countries.

To begin with, ANA said it will focus on vaccinating about 10,000 employees, mainly pilots and flight attendants working on international routes. 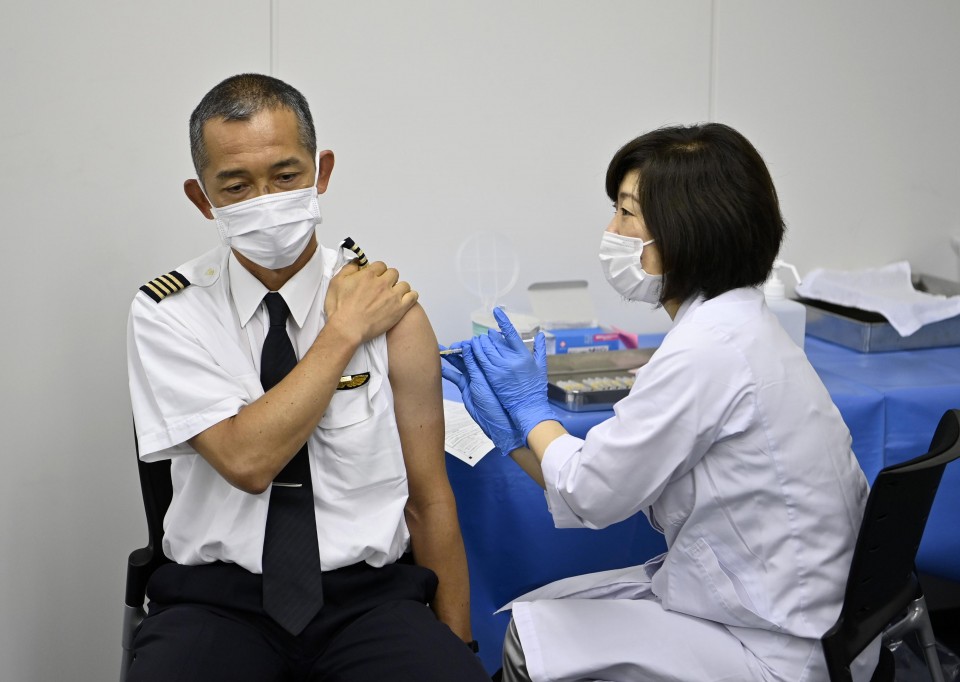 A pilot receives a COVID-19 vaccine at Haneda airport on June 13, 2021, under All Nippon Airways Co.'s vaccination program for employees. (Kyodo)

"Now I can board an international flight with peace of mind," Takuya Ebata, a 51-year-old ANA pilot said. "But I plan to continue taking preventive measures and not to relax my guard."

ANA vaccinated about 50 pilots and flight attendants in a meeting room next to its clinic at the airport. It will increase the number step by step and plans to inoculate around 300 people per day from June 21.

ANA said about 46,500 employees are eligible for the program and it expects to complete two-shot vaccinations for the 10,000 priority employees in late August.

JAL is also planning to provide COVID-19 shots, beginning with international aircrew and eventually offering them to a total of 36,000 employees of its group companies.

The government, facing criticism for Japan's slow vaccination rollout, hopes that the new on-site scheme will supplement existing efforts being led by municipalities across the country.

As of 5 p.m. Friday, the government accepted applications from companies and universities for inoculations of about 9.07 million people at 1,821 venues. A two-dose vaccine developed by U.S. biotech firm Moderna Inc. will be used.