The Olympic torch relay due to begin next week in Tokyo will mostly be taken off public roads in the first eight days as part of precautions against the spread of the coronavirus, the metropolitan government said Tuesday, in another setback to the host city's efforts to build momentum before the global sporting showpiece.

Amid signs of a rebound in COVID-19 infections, organizers will not hold the relay on the roads of Tokyo, excluding its small island areas, between July 9 and 16, the metropolitan government said, adding it will decide on the format for the second half of the event in the not-so-distant future. 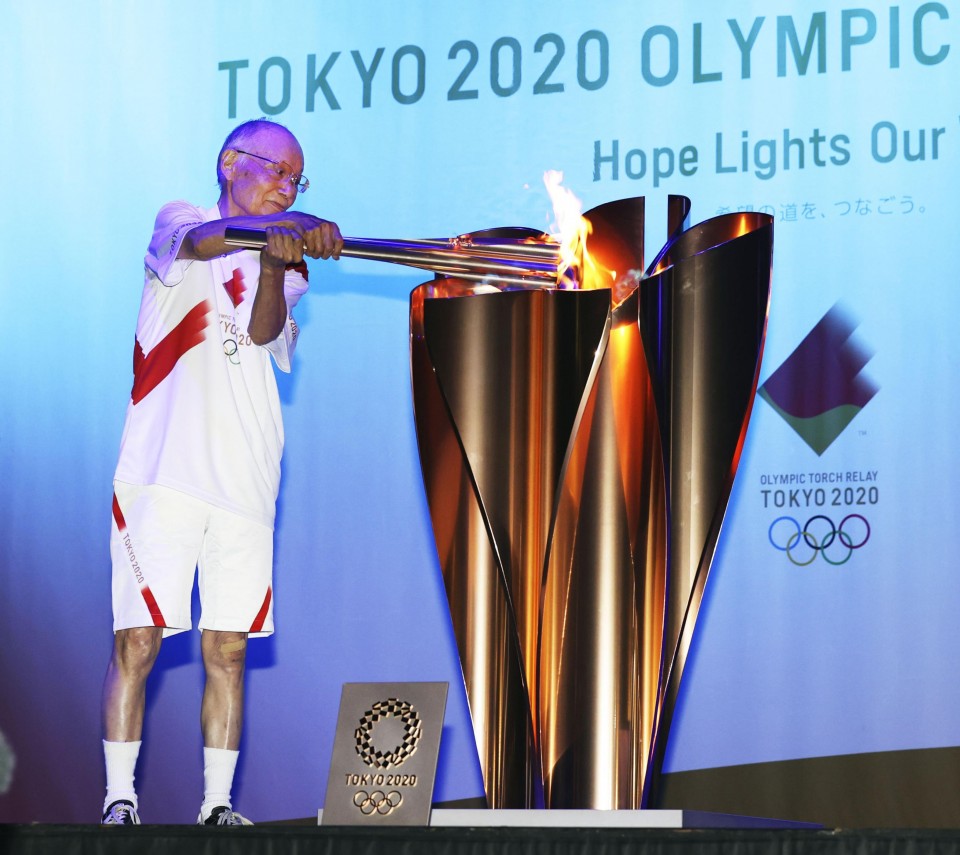 Satoshi Omura, a recipient of the 2015 Nobel Prize in physiology or medicine, transfers the Olympic flame to a cauldron after running in the Tokyo Olympic torch relay in the Yamanashi Prefecture capital of Kofu on June 26, 2021. (Kyodo) ==Kyodo

The flame will make its entrance at the National Stadium in Tokyo on July 23 -- the opening of the Olympics -- after traversing the country's 47 prefectures, with the coronavirus pandemic forcing many areas to scale down their programs.

However, since the third state of emergency ended on June 20, Tokyo has seen rising daily coronavirus cases, adding to concerns that the Olympics could trigger a spike in infections.

Uncertainty remains about whether the quasi-state of emergency can be lifted as planned. If the measure is extended or another state of emergency declared, the organizers may need to make further changes to the latter half of the 15-day relay from July 17 in the capital.

Last Wednesday, Tokyo reported 619 new infections -- the highest figure in about a month -- and confirmed 476 more cases on Tuesday.

"The situation of infections is very bad. If this continues, (the quasi-state of emergency) will remain beyond July 12," said an official at the organizing committee of the Olympics and Paralympics.

While the games organizers agreed to allow up to 10,000 spectators to enter each venue, if the number does not exceed 50 percent of its capacity, the decision was made under the assumption that the quasi-state of emergency will be lifted as scheduled.

Currently, the government's policy for areas under the quasi-state of emergency only allows a maximum of 5,000 people at sports and other large events.

The organizers and the government have started looking at options of what to do if the measure is extended, officials familiar with the matter said.

The first half of the relay in Tokyo was scheduled to take place mainly on the islands as well as the Tama area in the western suburbs of the capital's central part.

As a result of Tuesday's decision, over 600 runners will not be able to run on public roads. They are instead set to participate in a flame lighting ceremony at the final destination of each day.

The organizers are considering holding a ceremony at Komazawa Olympic park in Setagaya Ward on July 9 to celebrate the flame's arrival in the capital.

"We have prepared with the hope of having people run on public roads, so it is really unfortunate," a Tokyo official said. "It is important to connect the flame, and we would like to have the event finish with smiles on people's faces."

Before the start of the 121-day relay in late March, about 10,000 runners were initially set to carry the Olympic flame in the country's 47 prefectures.

But many of them ended up having to pass on the flame in parks and other designated areas devoid of spectators in so-called torch kiss ceremonies.

"There's no use saying that I want to run. I just need to follow whatever decision is made," said Hideo Sato, 79, who is scheduled to carry the torch in the second half of the Tokyo leg.

In Tokyo and many other parts of the country, all mass public viewings of this summer's Olympics and Paralympics have already been canceled as well as part of precautions against the virus.

Despite repeated pledges by the Japanese and metropolitan governments, and the International Olympic Committee to stage the games safely with anti-COVID measures, public skepticism about the massive sporting event during a global health crisis remains strong.