If American pitcher Monica Abbott keeps Japan from winning its second Olympic softball gold medal this summer, the host nation must bear some of the blame.

Thirteen years after softball's last Olympic appearance in Beijing in 2008, Abbott credits Japan for keeping her career alive long enough to play this summer, when Team USA will go in search of a fourth gold medal. 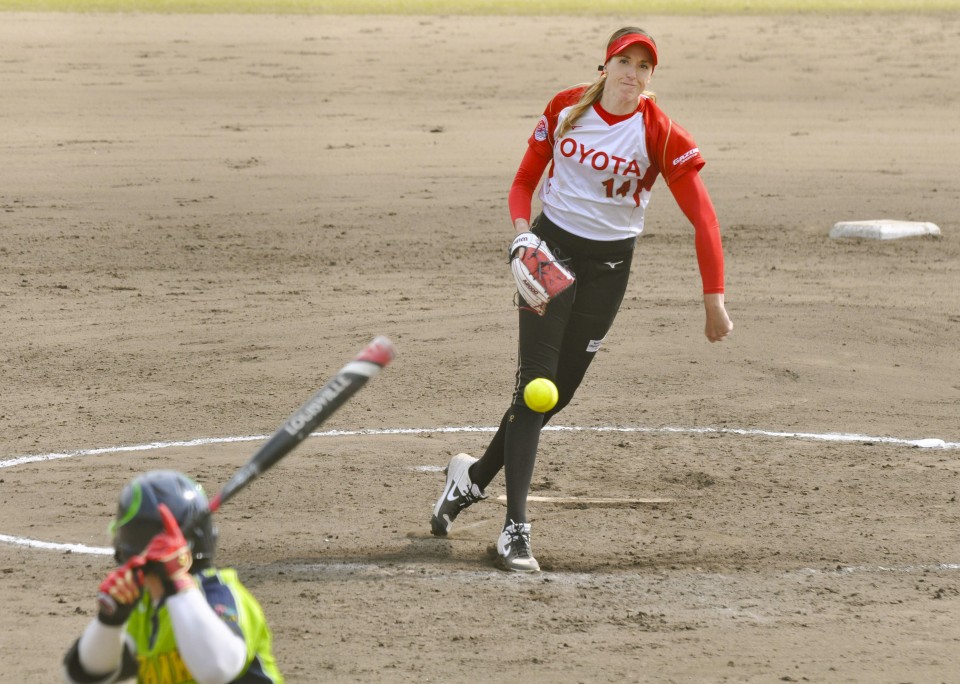 In 2010, the southpaw pitcher was invited to bring her game to Japan to play for the Japan Softball League's Toyota Red Terriers.

"In 2008, I was the youngest player on the Olympic team. Now I'm one of the oldest players. I'm definitely on the veteran side this go round," Abbott recently told Kyodo News.

"As an athlete, playing in Japan gave me an opportunity to learn about myself more. It's an area where I developed and grew as a professional. I don't know if I would still be playing softball if I didn't come to Japan."

"I played for Toyota Motor Corporation, one of the most well-known companies in the entire world, and I had the opportunity to play there and be a professional and learn the craft. I was a little hesitant because Japan was the USA's rival. We had just lost to them (in Beijing), but on the other side I was like, 'Oh my gosh, I have an opportunity to extend my career and learn from the Japanese style of softball.'"

That meant immersing herself in a Japanese way of training for sports that is somewhat more spartan than the norm for the United States. It was also obvious to Abbott, a baseball fan, how much Japanese softball players have been inspired by Japan's former major league star Ichiro Suzuki.

"They eat and breathe softball," Abbott said. "Their practice regimen has opened my eyes in the way they train for games. They train footspeed, they train agility, they train biometrics, their defensive speed and agility has been huge. Their overall athleticism on that side has been great to experience first-hand."

"The Japanese style of the game is a lot faster. Their main key is defense. Ichiro has a big influence both on their baseball culture and their softball culture. In the U.S., we're known more for our power and for our pitching. We're known for more of a power style of play while Japan is more of a speed style of play."

The United States qualified for these Olympics by reaching the 2018 World Championship final in Chiba, after Abbott's teammates overcame the three runs Japan scored off her in the semifinals. Japan made it to the final and was poised to avenge that loss.

With the game tied 4-4 after the tie-breaker rule failed to resolve the see-saw game in the eighth, Abbott made her first relief appearance of the tournament.

She and Japan ace Yukiko Ueno, who started and went the distance, each worked a scoreless ninth. In the 10th, Abbott surrendered a two-run homer to Japanese softball's version of Shohei Ohtani, slugging pitcher Yamato Fujita. But with a boisterous home crowd chanting Ueno's name in the bottom of the 10th, the Americans scored three runs off Japan's ace to win it.

"If you look at women's sports, Japan versus the USA, there's a strong rivalry there, not only in softball but also volleyball and soccer," Abbott said. "The inner athlete in us came out that day and we went head-to-head and battled our hearts out."

And now, after 13 years, softball is back in the Olympics, and Abbott said the players are keen to deliver an electrifying spectacle when the world is watching.

"I love baseball but the pace of play is night and day," she said. "In softball, the pace of the game is supersonic speed compared to baseball. We have 20 seconds between pitches. The reaction time and the pace create an intense environment. Do not blink."

If she could change one thing, it would be allowing foreign fans who have been vaccinated against the coronavirus, including her family and friends, into the stands to share this huge moment with the athletes.

Local organizers formally decided in March to hold the Olympics without overseas spectators due to the coronavirus pandemic, which had already resulted in an unprecedented one-year postponement of the games.

"It's a huge disappointment, especially those who have been vaccinated, not only for me but for every international," Abbott said.

"You already know there are risks going there, but if an individual's family wants to take the risks...It happens once every four years. People planned to come to 2020 two years in advance. People budgeted for that, and now they're told they can't watch or be a part of it. That's hard."