A 29-year-old man was sentenced Wednesday to three years in prison for operating a manga website that allowed people to read pirated copies of popular comics such as "One Piece."

The Fukuoka District Court found Romi Hoshino guilty of copyright infringement for running the website Manga-Mura, which is believed to have caused the manga industry losses of over 300 billion yen ($2.7 billion), imposing a fine of 10 million yen. 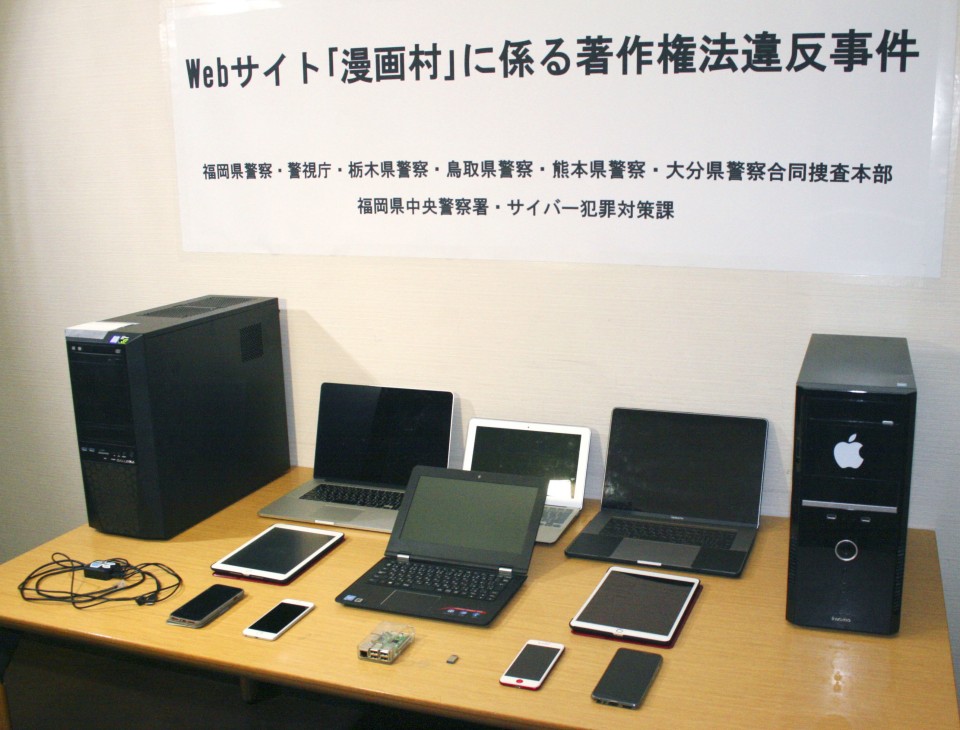 File photo shows personal computers and other devices confiscated by police over a copyright piracy case related to the Manga-Mura website, displayed at a police station in Fukuoka, southwestern Japan, in September 2019. (Kyodo)

In handing down the ruling, Kambara said the operation of the now closed Manga-Mura site carried "the risk of fundamentally destroying the profit structure of copyrighted works and hindering the development of culture."

Hoshino asked a number of accomplices to join him in making manga available for the website through a system he established with the intent to earn a lot of money, according to Kambara.

Prosecutors had sought 54 months in prison and a fine of 10 million yen along with confiscation of the criminal proceeds, which were earned through online adverts on the site.

Calling for a suspended sentence, Hoshino's defense team had argued during the trial that his actions did not constitute a crime because some of the manga files uploaded on Manga-Mura were already viewable on other websites.

Hoshino was detained in the Philippines after having been listed on an international wanted list and was deported to Japan in September 2019. He had entered the Philippines in May of the previous year.

According to the ruling, Hoshino conspired with three accomplices to violate the copyright law by uploading unauthorized image files of the megahit comic "One Piece" and "Kingdom" in May 2017 on Manga-Mura.

Hoshino concealed the 62 million yen in overseas bank accounts between December 2016 and November 2017. The Manga-Mura website was shut down in April 2018, a month before he left for the Philippines.

Hoshino's accomplices -- two men and one woman -- have already been convicted.

An official of Shueisha Inc., a major publishing company, welcomed the jail sentence as "appropriate."

"If a work that authors have put their heart and soul into can be freely accessed by the public, this would harm the environment in creating interesting works," he said in a press conference following the ruling.

Shueisha is the publisher of "One Piece" and "Kingdom" as well as that of many other popular manga series.

The official added that he hopes the ruling will deter people from illegally uploading manga online.

Although Manga-Mura has been shut down, Shueisha and other major publishers say there are still numerous websites breaching copyright.