Japanese tennis star Naomi Osaka withdrew from the French Open on Monday after boycotting a press conference and being threatened with disqualification, revealing her battle with depression.

"The truth is that I have suffered long bouts of depression since the U.S. Open in 2018 and I have had a really hard time coping with that," Osaka said in a statement posted on Twitter.

"I think now the best thing for the tournament, the other players and my well-being is that I withdraw so that everyone can get back to focusing on the tennis going on in Paris," the 23-year-old winner of four Grand Slams said. 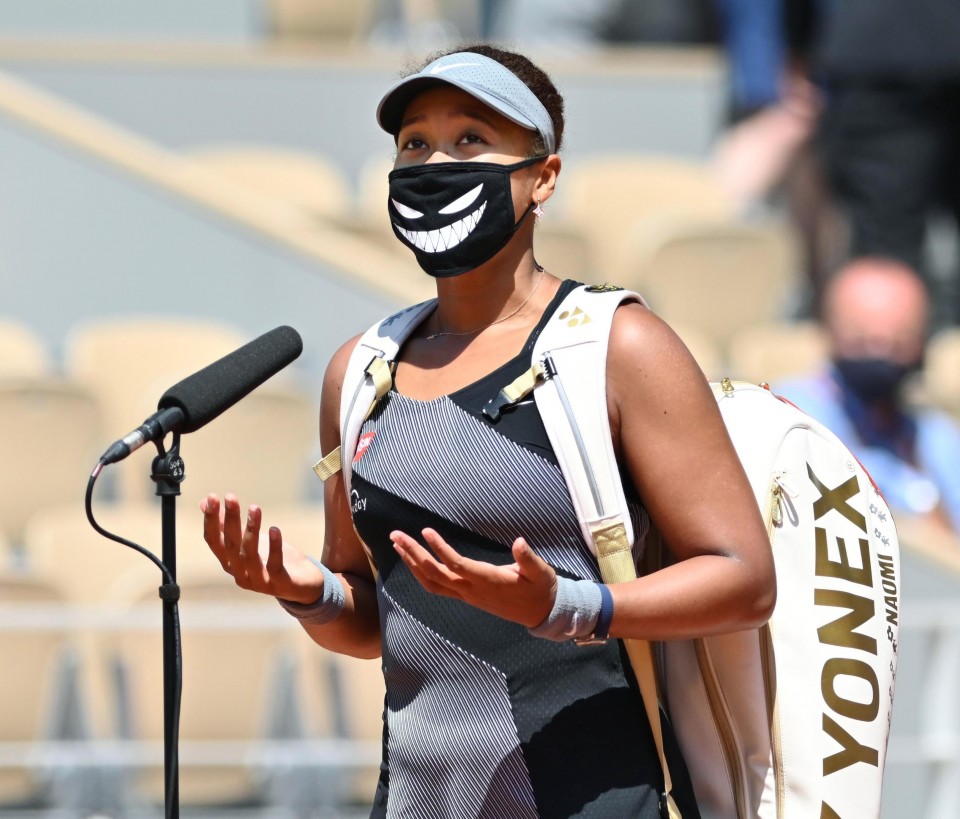 Naomi Osaka gestures after winning in the first round of the women singles during the French Open at Roland Garros in Paris on May 30, 2021. (Anadolu Agency/Getty/Kyodo)

Her remarks came after French Open organizers fined Osaka $15,000 and threatened to disqualify her from the tournament after the world No. 2 skipped a press conference following her first-round victory Sunday over Romania's Patricia Maria Tig.

The board of the four Grand Slam tournaments said Sunday that Osaka had been fined for refusing to "honor her contractual media obligations" and faced suspension or expulsion from the event if she continued to snub the press.

"This isn't a situation I ever imagined or intended," Osaka said in the statement.

She had announced on social media before the French Open that she would be skipping news conferences for the sake of her mental well-being. She likened journalists' questions to "kicking a person while they're down."

"I never wanted to be a distraction and I accept that my timing was not ideal," she said, but added she "would never trivialize mental health or use the term lightly."

"I'm gonna take some time away from the court now," she said, while expressing her desire to work with tennis tournament organizers to improve the way press conferences are held following matches "when the time is right."

Osaka was scheduled to face Romania's Ana Bogdan in the second round.

"First and foremost, we are sorry and sad for Naomi Osaka," Moretton said.

"The outcome of Naomi withdrawing from Roland-Garros is unfortunate. We wish her the best and quickest possible recovery, and we look forward to having Naomi at our tournament next year."

Osaka's shock withdrawal from the French Open generated an outpouring of support across the tennis world and beyond, with many of her peers taking to social media with encouraging messages for the player of Japanese and Haitian descent.

"I was surprised. I can't imagine what she's been going through, but I hope she doesn't regret her decision," fellow Japanese player Misaki Doi told reporters after suffering an early exit in the women's singles.

Doi also said that although it is "unpleasant" to attend a press conference following a defeat, it allows players to "switch over toward the next (match)," adding that she also considers it part of her job.

"It's sad to see Naomi-chan withdraw. I wanted to see her compete despite the hardship," said Yoshihito Nishioka, who won his opening match in the men's singles.

Seven-time Grand Slam champion Venus Williams wrote on Instagram, "So proud of you. Take care of yourself and see you back winning soon!"

Osaka has claimed the U.S. and Australian open titles twice each. In May, she was named winner of the 2021 Laureus World Sportswoman of the Year Award after using her platform to speak out for the Black Lives Matter movement against police brutality in the United States.