The China-imposed anti-subversion law has brought a sea change to Hong Kong's political sphere in just a year's time as the city marks the law's 2020 enactment Wednesday on the eve of its handover anniversary.

The contentious national security law, promulgated by the Chinese parliament on June 30 last year to stem Hong Kong's anti-government movement for which China blamed foreign government meddling, has helped tame most of the active players in the city's drive for democracy. 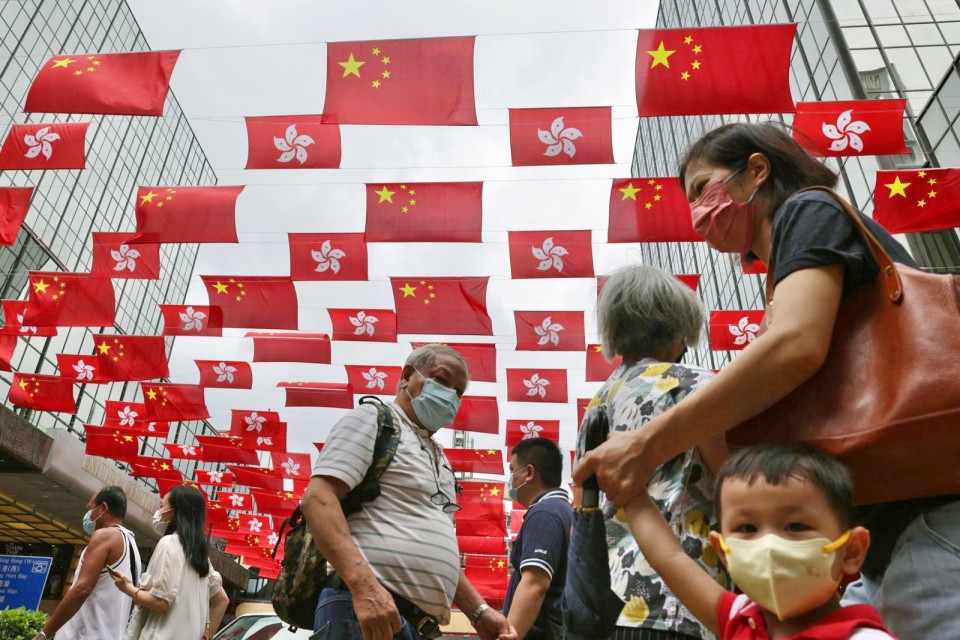 China national flags and Hong Kong flags are seen displayed in Hong Kong on June 29, 2021. (For editorial use only)(Kyodo)

As of this week, police had arrested 117 people alleged of breaching the national security law.

Tong Ying-kit, a motorcyclist who brandished a flag emblazoned with slogans deemed subversive and drove into a police line during a protest on July 1 last year, was the first to be charged under the law for inciting secession and terrorism. His trial began last Wednesday and is scheduled through July.

Also jailed since the law came into effect are individuals such as media mogul Jimmy Lai, founder of the Next Digital group that published the outspoken Apple Daily, and young activists like Joshua Wong and Agnes Chow.

They further include veteran democracy advocates, former lawmakers, scholars, lawyers, business people and union leaders accused of jointly plotting to overthrow the government by winning a majority of seats in the legislature.

Most of the arrested have been indicted and are under detention pending trial.

Activists including Nathan Law, Sunny Cheung and Ted Hui are among an unspecified number of people who fled Hong Kong for self-imposed exile after the new law came into force.

Lai's Apple Daily has its headquarters twice raided by police, its news material seized, its company assets frozen and its executives, including editors and editorial writers, arrested for alleged conspiracy to collude with foreign forces to endanger national security. It shut down last week, days after celebrating its 26th anniversary.

"The ending is something hard to digest," a former Apple Daily reporter, who preferred anonymity, told Kyodo News. "Arresting journalists for writing articles is just excuses. I think it is the paper's influential power that really got us killed."

"In the last two years, Hong Kong was inescapably moving on toward an end as if following a written script, a script of endless killing, which will not stop just because Apple closed down," she said, speaking metaphorically about the democracy movement's fate.

Following Apple Daily, online news portal Stand News announced it had purged its commentaries, stopped taking funds and relieved its executives of their duties, while other online media have also ceased operating or said they were retreating from Hong Kong.

The law, targeting acts of secession, subversion, terrorism and collusion with foreign forces with the maximum penalty of life imprisonment, also requires the government to "promote national security education in schools and universities and through social organizations, the media, the internet and other means to raise the awareness of Hong Kong residents of national security and of the obligation to abide by the law."

It also stipulates that individuals standing for election to public office have to swear allegiance to the authorities. 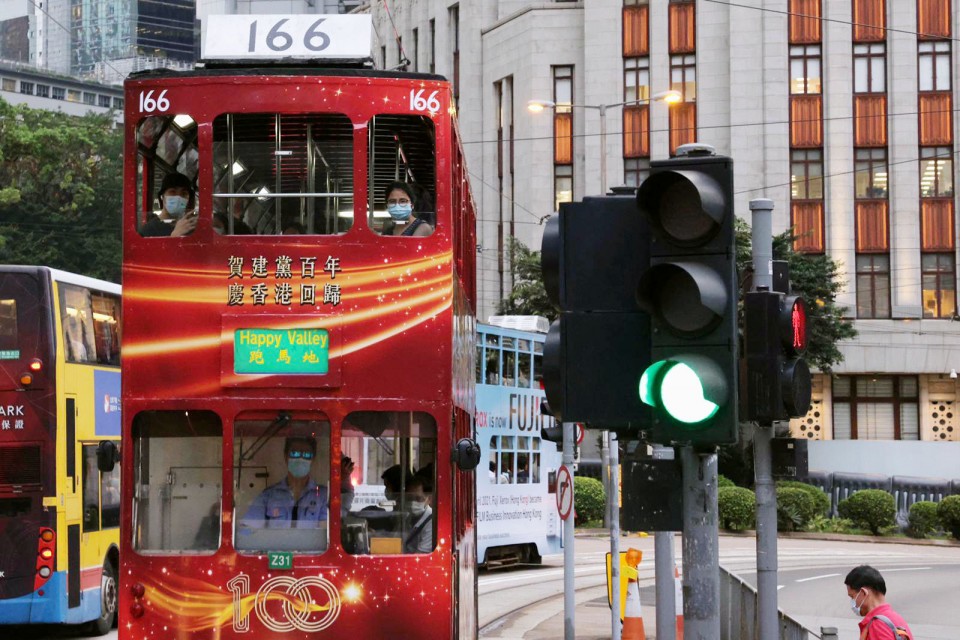 A tram in Hong Kong is seen colored in red and marked with letters celebrating the 100th anniversary of the Chinese Communist Party's founding on June 29, 2021. (For editorial use only)(Kyodo)

"The government has become less tolerant toward criticisms and opposing voices since the anti-China extradition bill movement," Bruce Lui, a journalism lecturer at the Hong Kong Baptist University, told Kyodo News. "On minute civilian matters, it will tolerate, but if you criticize fiercely or even take action, then it will cross the red line prescribed by the national security law."

Organizers of major anti-government rallies and protests are among the targeted groups to be taken down.

The Civil Human Rights Front, which held the annual July 1 protest since 2003, has decided not to host this year's procession as its leaders were jailed, while its legality is under police investigation. July 1 marks the anniversary of Hong Kong's return to China in 1997.

The Hong Kong Alliance in Support of Patriotic Democratic Movements of China, the group hosting the annual June 4 candlelight vigil commemorating the bloody crackdown in Tiananmen Square in 1989, is set to disband or be suspended for its anti-Communist Party nature, which according to pro-Beijing politicians does not comply with the national security law.

"There are invisible red lines too," said Lui, a former journalist, explaining how it used to be possible to say one loves China but not the Chinese Communist Party.

"But now, with different redefining efforts, such as making amendments to the Constitution and China's national security law, the state and the country and the Communist Party are now banded together. In the past, you could criticize or oppose the communist regime, but not anymore," he said, likening the situation to a minefield.

With the disintegration of Hong Kong's free press, the focus now shifts to education, with schools and universities tasked to educate students on abiding by the national security law.

"Simply by fixing up the media won't help bring about people's change of heart and Beijing knows it," Lui said. "They will put in extra effort through education and other soft power like art and culture to grow people's affiliation with the country."