Japan's Kei Nishikori reached the third round of the French Open after battling from behind to defeat Russian 23rd seed Karen Khachanov in a grueling five-set encounter that lasted nearly four hours on Wednesday.

Nishikori, who also needed four hours to beat Italian qualifier Alessandro Giannessi in the first round, had to work hard on Court Philippe-Chatrier, surviving the 4-6, 6-2, 2-6, 6-4, 6-4 marathon to set up a round of 32 meeting with Swiss qualifier and world No. 150 Henri Laaksonen. 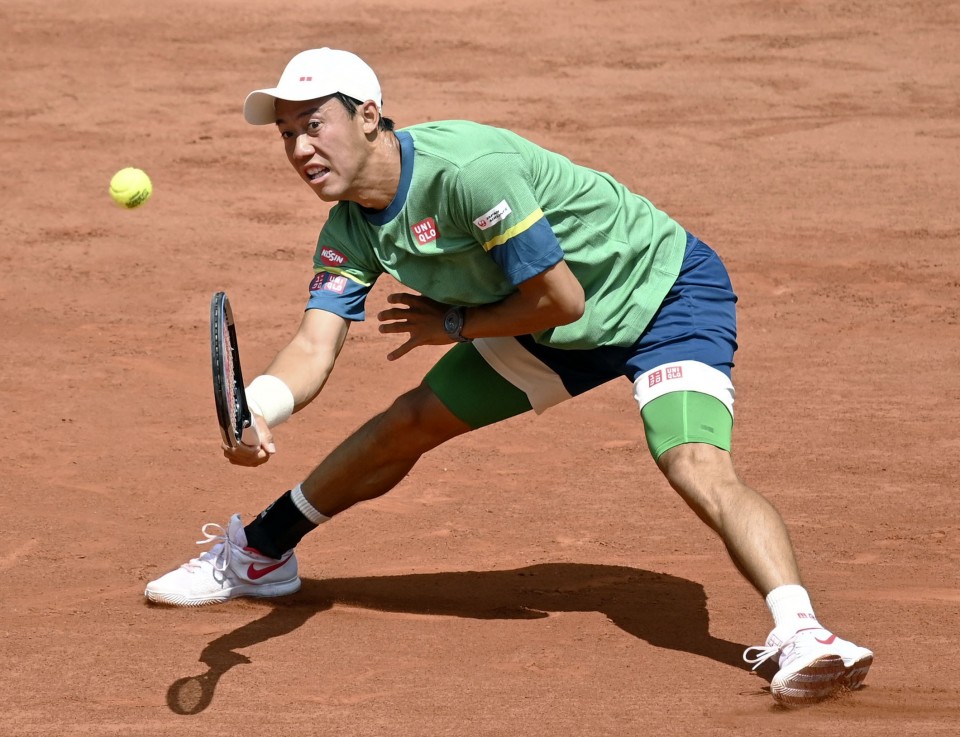 Kei Nishikori of Japan plays against Russia's Karen Khachanov in the second round of the French Open tennis tournament in Paris on June 2, 2021. (Kyodo) ==Kyodo

Khachanov was hampered by a bleeding finger in the fifth set but Nishikori showed no pity as he ground his opponent down with his consistent backhand. He closed out the set 6-4 with an angled forehand winner before raising his hands in jubilation.

"I'm hoping to play in the final so I wouldn't say this is a great start to the tournament," Nishikori, ranked at No. 49 in the world, said after the match.

"I feel like I've played five matches already. I made many mistakes but I'm glad I pulled off a win." 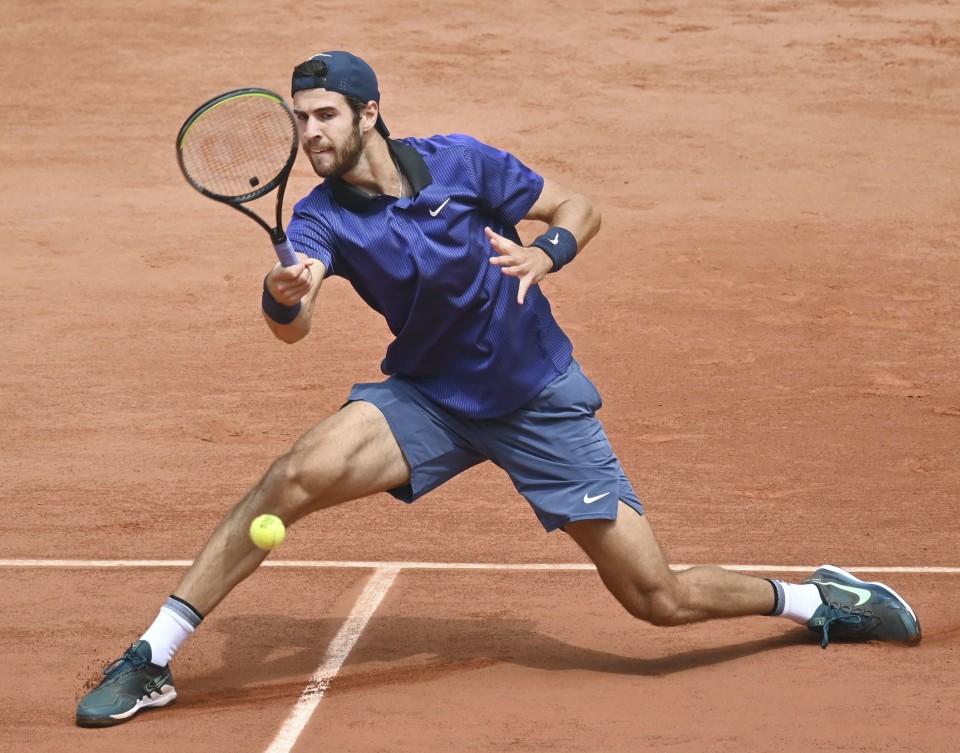 Karen Khachanov of Russia plays against Japan's Kei Nishikori in the second round of the French Open tennis tournament in Paris on June 2, 2021. (Kyodo) ==Kyodo

Nishikori said he felt light-headed after dropping the third set, but the former world No. 4 turned the tide with a few surprise serve-volley points, leaning on his experience to claw his way back into the match against his younger opponent. 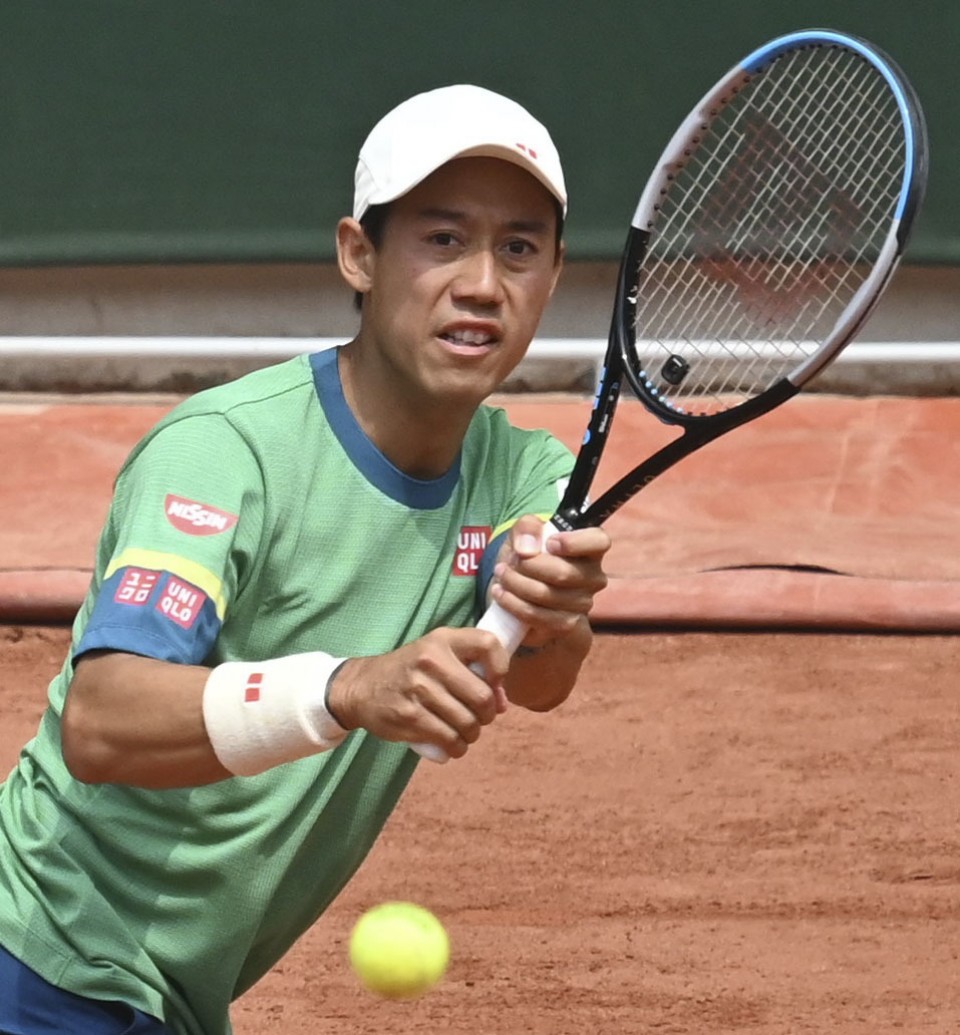 Kei Nishikori of Japan plays against Russia's Karen Khachanov in the second round of the French Open tennis tournament in Paris on June 2, 2021. (Kyodo) ==Kyodo

"My body said no (after the third set) but my mind was (saying) keep playing," he said.

According to the ATP, Nishikori's five-set career record now stands at 26-7, and he has the best winning percentage of all active players over the distance.

Nishikori and his next opponent Laaksonen have not met on tour, but the Swiss comes into the match on a high after convincingly defeating 11th seeded Spaniard Roberto Bautista Agut in four sets on Wednesday.

Asked about the high-profile withdrawal of fellow Japanese player Naomi Osaka, the 31-year-old Nishikori expressed sympathy for her situation and mental health struggles.

"It's a health condition that can happen to anyone, not just athletes," Nishikori said in reference to the "bouts of depression" Osaka revealed she has suffered.

"I hope she recovers soon. As for me, I've gotten a lot of help from my mental trainer. This isn't about sports. Everyone needs help," he said.