Japanese political parties are competing with each other to promote female candidates ahead of a lower house election that must be held by this fall, but some worry that, like similar efforts before, the initiative may be more sloganeering than a harbinger of real change.

With Japan's male-dominated political world forming a large part of the reason why the country places a shocking 120th out of 156 countries in a gender gap ranking, many parties have or are considering setting numerical goals for female candidates.

In the Diet, women comprised just 9.9 percent of lawmakers in the powerful lower house, or House of Representatives, and 22.9 percent in the House of Councillors as of June 2020 as Japan found itself ranking as low as 147th in the political field in the World Economic Forum's Global Gender Gap Index for 2020. 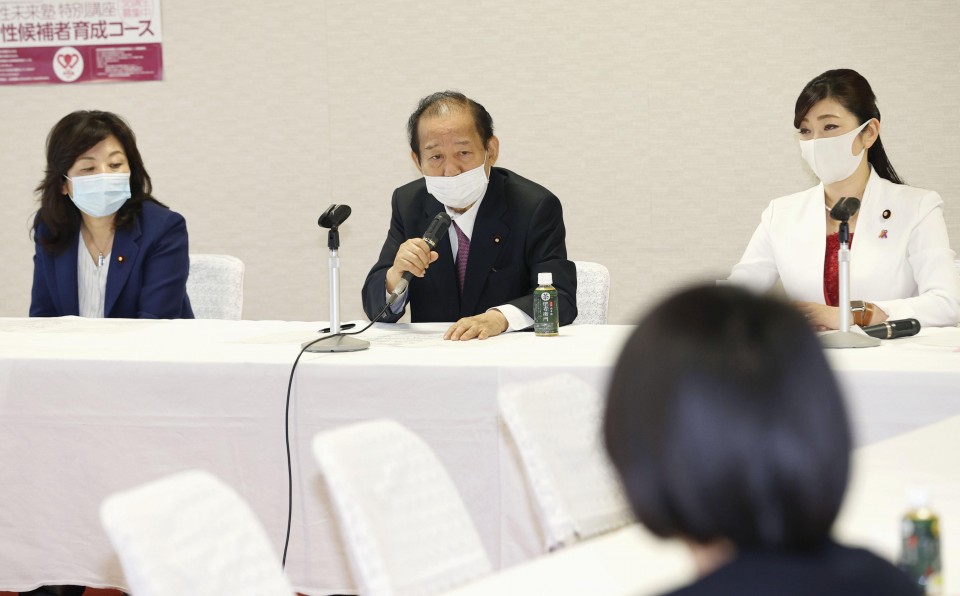 Toshihiro Nikai (C), secretary general of the ruling Liberal Democratic Party, speaks at a meeting with female lawmakers of the party on March 15, 2021, at the party headquarters in Tokyo. (Kyodo)

Taimei Yamaguchi, chair of the ruling Liberal Democratic Party's Election Strategy Committee, said recently that he felt "a strong sense of crisis" about the country's standing in the gender gap index. "There is room to further promote women's participation" in politics, also including in local assemblies, he said.

Since the LDP, currently holding some 60 percent of seats in the lower house, is likely to have many successful candidates, the level of increase in its female lawmakers will be a direct indication of its seriousness on the issue.

The party's committee on women's empowerment put forward some proposed goals in April ahead of the lower house election. These include requiring 15 percent of all the party's candidates to be women and giving top slots to female hopefuls in at least three out of the 11 regional electoral blocks under the proportional representation system.

The LDP has previously prioritized female candidates in the proportional representation system. In the 2005 lower house poll, it placed 13 female candidates at the top of proportional representation lists, which resulted in eight of them winning seats, excluding those who ended up taking seats by winning in single-seat constituencies. That effort was overseen by the ruling party's current No. 2, Secretary General Toshihiro Nikai.

But the hurdles are high this time around.

Currently, most of the 289 single-seat constituencies have male incumbents, and among them, weaker candidates who are hoping to ensure they retain seats in the lower house via simultaneous inclusion in the proportional representation lists under the duplicate candidacy system are certain to oppose being ranked lower than female candidates. 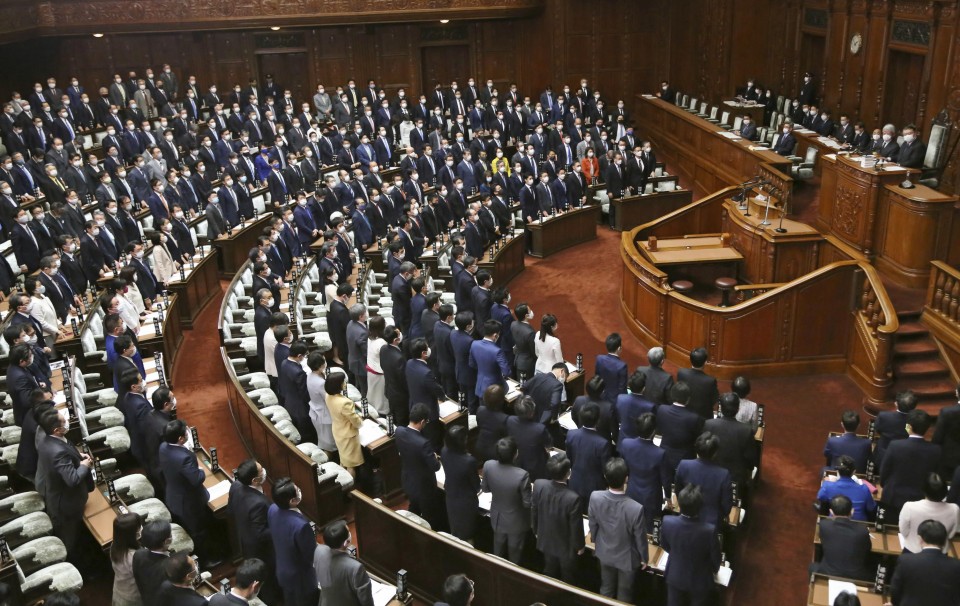 Most of the attendees at a plenary session of the House of Representatives on April 6, 2021, in Tokyo are male lawmakers, with only few female lawmakers. (Kyodo)

"We cannot produce results unless the LDP head or the secretary general makes a bold decision," an LDP source said.

Opposition parties, meanwhile, appear committed to change. The Democratic Party for the People has vowed in its policy platform to aim for women to comprise 35 percent of all candidates.

The Constitutional Democratic Party of Japan has mentioned the possibility of new legislation to resolve the gender gap issue. The party's executive deputy leader Renho wrote on Twitter, "I want to form a society where it is a matter of course for a woman to strive toward being a politician."

The LDP, its ruling coalition partner Komeito, and the Japan Innovation Party had not set numerical goals as of the end of March, the Cabinet Office said.

Meanwhile, with women often held back from entering politics by situations they face, questions must be raised about whether parties have sufficient support systems in place.

It is not rare, for instance, for women to give up running for a Diet seat due to opposition from family members, while competing in elections in regional areas can bring its own special challenges with regard to campaigning and the need to attend frequent evening meetings that make them think twice about joining a race.

"Whether a party is serious (about increasing the number of female lawmakers) can be seen in its measures to foster female candidates and in its steps against harassment," said journalist Renge Jibu.

"I hope voters will judge the parties by their attitude and not just by the numbers (of female candidates)," she said.

"We also need to persistently and sternly check whether the parties have achieved what they have promised so that their PR (to promote female lawmakers) will not end as just a one-off 'carnival show' for the election," she said.

Over 60% say gender equality not realized in Japan: Kyodo poll