The Tokyo Olympic organizing committee's plan to use GPS as one of the measures against COVID-19 is not intended to monitor the real-time whereabouts of people from overseas, but to trace and confirm their movements retroactively if a problem arises, its CEO said Wednesday.

Toshiro Muto told reporters that everyone entering Japan from abroad, including athletes, officials and media members, will be required to submit plans of their first 14 days in the country and turn on the GPS function on their smartphones. 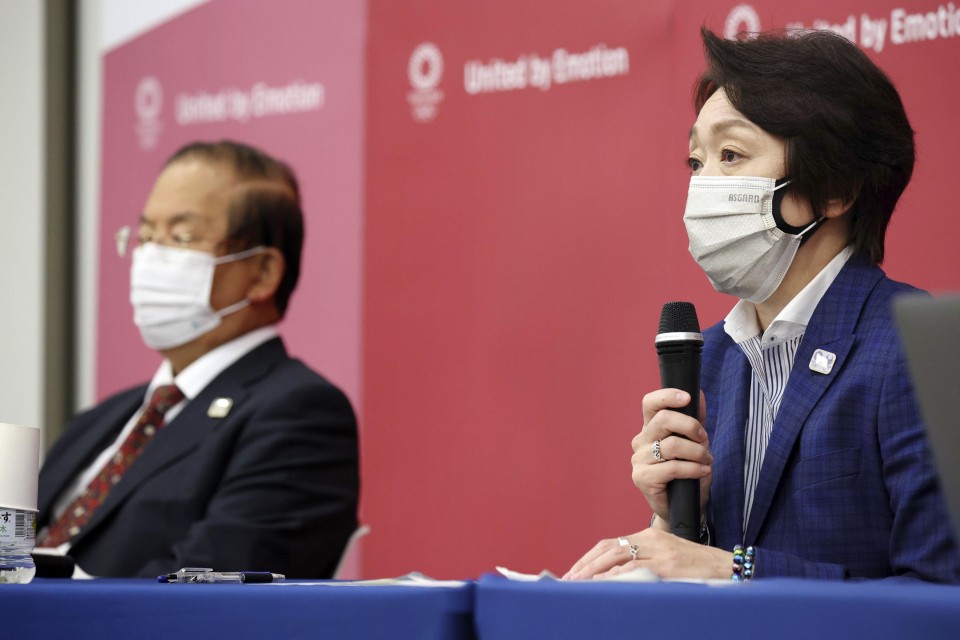 Seiko Hashimoto (R), president of the Tokyo Olympic and Paralympic organizing committee, and Toshiro Muto, CEO of the committee, speak at a press conference after attending an online meeting of the International Olympic Committee's executive board on June 9, 2021. (Pool photo)(Kyodo)

"If we have to monitor the movements all the time, it would require manpower...when there are problems, I think it is important to have the GPS function to allow visitors to make sure they did not do anything wrong," Muto said.

He said use of the system, already agreed on by Olympic officials around the world, will allow the organizers to confirm afterward that the visitors followed the plans they submitted.

Speaking at a press conference after attending a virtual meeting of the International Olympic Committee's executive board, Muto also said the organizers want to decide by the end of this month on a basic policy concerning drinking alcohol in the athletes' village.

The Tokyo Olympics and Paralympics will feature about 15,000 athletes from around the world. Japan has so far halved the number of Olympic officials, support workers and press members from abroad from the initially planned 180,000 to ensure the safety of the games.

With nearly 40 days until the Olympic opening ceremony, Tokyo remains under a state of emergency to bring down the number of coronavirus infections.

While cases of infection have declined since late April when the emergency took effect, health care experts have warned of a possible rebound.

Shigeru Omi, Japan's top COVID-19 adviser, has been critical of staging the Olympics and Paralympics, saying it is "not normal" to go ahead during the global health crisis.

Omi, an infectious disease expert who heads a government subcommittee on the coronavirus, said Friday he plans to put together recommendations on what to do with the Tokyo Games by June 20, the final day of the state of emergency.

This month, the organizers are expected to draw a conclusion on whether to allow people in Japan to enter venues to watch competitions, after deciding in March to hold the games without spectators from abroad.