Taiwan's President Tsai Ing-wen thanked Japan on Friday for supplying "timely assistance" in the form of 1.24 million doses of COVID-19 vaccine, as the self-ruled island struggles to procure shots.

Tsai called Japan "a partner insisting on the same values of freedom and democracy" and said it has "given the democratic Taiwan more confidence in democracy." 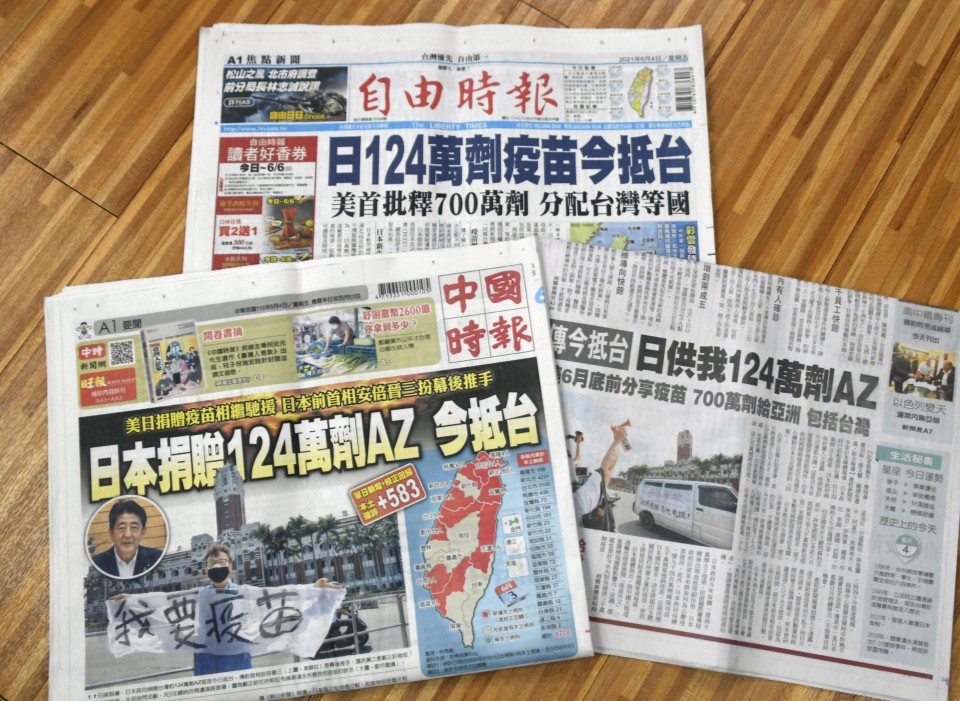 The free-of-charge shipment of the vaccine developed by Britain's AstraZeneca Plc touched down at Taoyuan International Airport at around 2 p.m. amid heavy rain brought by tropical storm Choi Wan.

Taiwan's de facto ambassador to Japan, Frank Hsieh, who saw the shipment off at Narita airport near Tokyo in similarly wet weather, described the shipment as "timely rain."

He apologized to the Taiwanese public for keeping the matter a secret from start to finish, saying that "before the vaccines get on the plane, it's possible to change," suggesting that China could intervene.

Chinese Foreign Ministry spokesman Wang Wenbin has expressed opposition to Japan's plan to donate COVID-19 vaccines to Taiwan, labeling it as "a political show" and an act of "interference in China's internal affairs."

He also admonished Japan that "vaccine aid should return to the original intention of saving lives, and not be reduced to a toll for political self-interest."

The Central News Agency quoted an anonymous source as saying on Wednesday that Tsai played a key role in the negotiation process with the assistance of the United States. The 10-day talks the source described as "silent battles" finally came to fruition when the three sides reached a consensus, it said.

According to the report, the talks began on May 24 when the temporary head of the U.S. Embassy in Japan visited Hsieh at his official residence in Tokyo, the first time a U.S. diplomat has done so since Taiwan and the United States severed diplomatic ties 42 years ago.

Hsieh revealed on his Facebook page the following day that they were joined by Japanese politicians and friends to "discuss regional peace and prosperity among other issues."

Taiwan's Foreign Ministry said on Friday that Japan's move once again confirmed the old adage that "a friend in need is a friend indeed," adding that the Taiwanese government and its people will forever be grateful for the warm support from their friends in Japan.

On that solid foundation, the ministry said, Taiwan hopes to work together with its "important partner and precious friend" to combat the spread of the epidemic.

The Liberty Times praised Japan for demonstrating its "guts" in the face of Chinese "threats."

According to the newspaper, former Japanese Prime Minister Shinzo Abe encouraged the government of his successor Yoshihide Suga to provide Taiwan with the vaccine, saying, "What Taiwan needs is speed."

Meanwhile, Taiwan has thanked the United States for including Taiwan in the 7 million COVID-19 vaccines destined for Asia.

The American Institute in Taiwan, Washington's de facto embassy in lieu of formal diplomatic ties with Taipei, said on Wednesday that the American people will never forget Taiwan's generosity in providing face masks and other emergency supplies during the early stages of the COVID-19 crisis in the United States.

The vaccine contributions will help Taiwan protect its most vulnerable populations and complement its ongoing procurement of high-quality American vaccines, including Moderna, and the generous donation of AstraZeneca vaccines Japan announced on Friday, it said.

"Our three democracies have a proud tradition of helping each other during crises," it added.

Taiwan has been grappling with a dramatic rise in coronavirus cases since the middle of last month. As of Friday, the total confirmed cases exceeded 10,000 and reached 10,446, including 187 deaths.

China regards the democratic island as a renegade province to be reunited with the mainland, by force if necessary.