Fung Wai-kong was arrested for conspiring to collude with foreign forces to endanger national security as he was attempting to leave Hong Kong international airport on Sunday night for Britain, according to media reports. 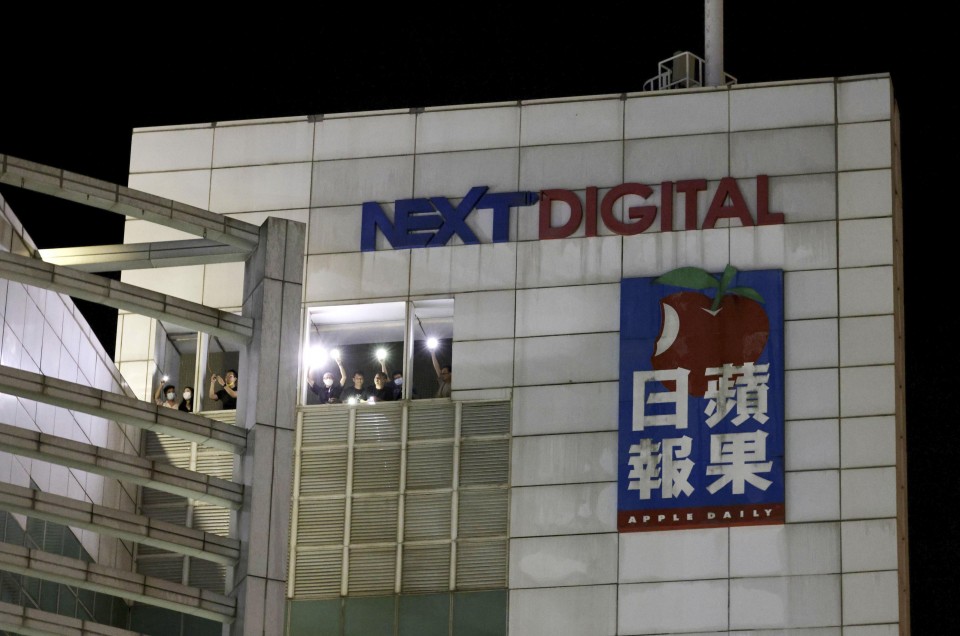 File photo taken on June 23, 2021, shows the head office of the Apple Daily in Hong Kong. (For editorial use only)(Kyodo)

The 57-year-old former editorial writer, who also served as the managing editor of the English-language news section, is the seventh Apple Daily figure to be arrested following a series of recent crackdowns on the paper.

Hong Kong police confirmed Monday its national security department has arrested a 57-year-old man for conspiring to collude with foreign forces, without mentioning his name, adding he remains in detention while the investigation continues.

The pro-democracy media outlet folded last Thursday after Hong Kong authorities arrested its editor-in-chief, another lead editorial writer and four others on the same charge and froze the company's assets earlier this month.

Jimmy Lai, the founder of Apple Daily's publisher, Next Digital Ltd., has also been charged with colluding with foreign forces and is serving a prison sentence for taking part in unauthorized assemblies in 2019.

Observers have said the case of Apple Daily exemplifies how the national security law imposed last year by mainland China on the territory is used to arbitrarily crack down on organizations that Beijing considers problematic.

In response to the arrest of Fung, the Hong Kong Journalists Association said he was the second staff member arrested for writing commentaries for Apple Daily, condemning the police's targeting of the press.

"The police have repeatedly ignored voices of the people and the media and made arbitrary arrests of journalists simply in the name of national security," the association said in a statement.

In the wake of the crackdown on Apple Daily, an online news portal called Stand News said Sunday it is taking down commentaries from its website until the authors give consent to publish, to protect them and its editorial staff from the risk of prosecution.

The news portal site, seen as being pro-democracy, also said it stopped accepting donations and relieved six out of eight executives of their duties, including singer-activist Denise Ho and former legal sector lawmaker Margaret Ng.

"When editorial staff and writers, like executives and bosses, could also become arrested and face legal consequences, it is hard to be 100 percent safe," Ronson Chan, deputy assignment editor of the Stand News, told Cable News. "What we do is for precaution, but nothing is 100 percent safe."

Yau Ching-yuen, founder of online media Post 852 that ceased operating in May, said on YouTube that all of its video content had been taken offline, while another news portal Winandmac Media also said the company moved away from Hong Kong after receiving threats over its news reporting.

"With the national security law, the redline is moving, and it's hard to know if anything you reported would land you in prison," a reporter identified as "ah gwai," said.