The first-ever meeting between the sides at Edinburgh's Murrayfield Stadium was a comfortable 28-10 victory for the Lions, but Jamie Joseph's Brave Blossoms can take a number of positives into their upcoming test against Ireland. 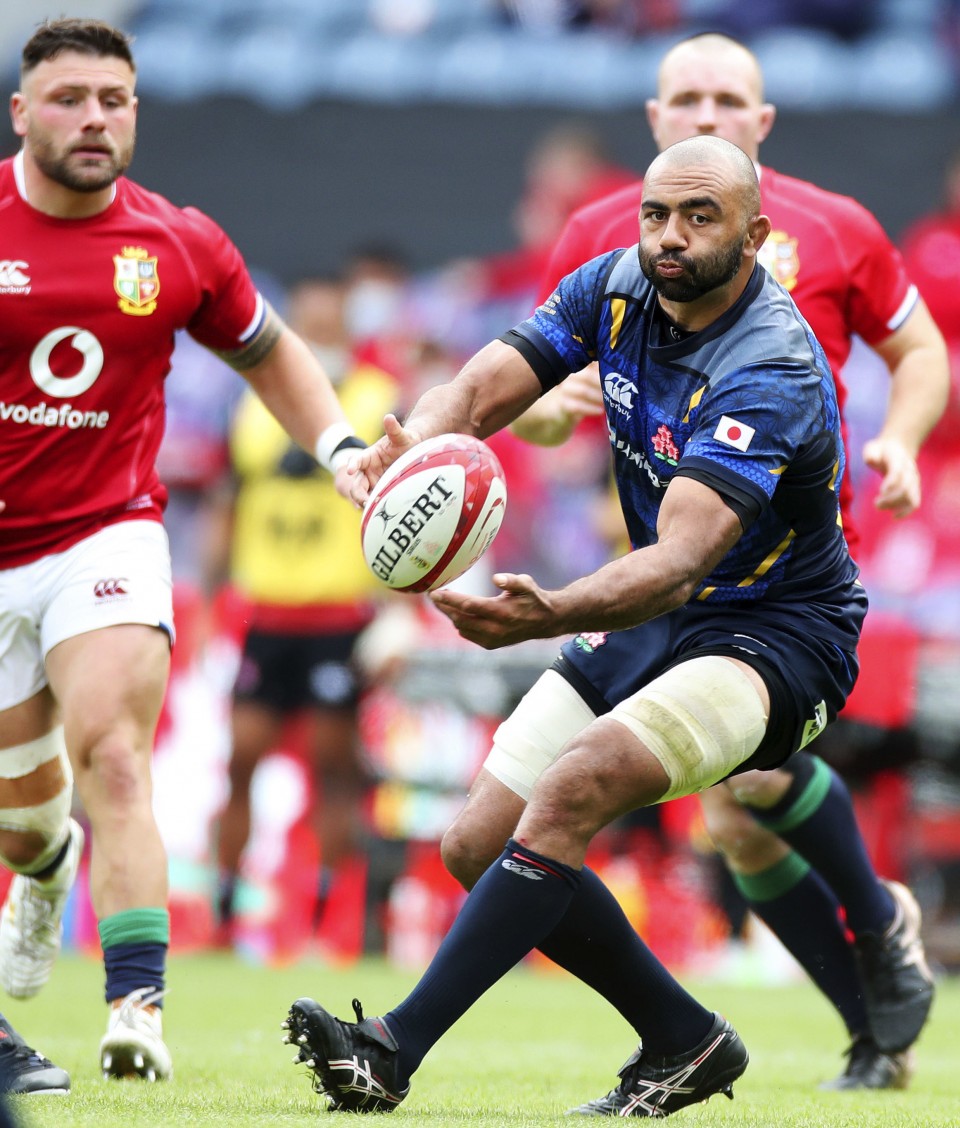 Japan captain Michael Leitch plays a pass during an international test match against the British and Irish Lions at Murrayfield Stadium in Edinburgh, Scotland, on June 26, 2021. (For editorial use only)(Kyodo)

Among them was the play of the hard-running Himeno, who made an impact off the bench in the second half, bulldozing over for Japan's sole try in the 59th minute and crossing again late, only to be held up in goal.

"Being able to play against the Lions today will be a treasured moment in my rugby career. It was a great experience," said the 26-year-old lock and loose forward, who completed an impressive first Super Rugby season in New Zealand with the Dunedin-based Highlanders.

"My Super Rugby experience in New Zealand has given me more self-confidence. In stages of today's match, I could feel where I have grown."

For the Lions, the win was overshadowed by the loss of captain Alun Wyn Jones, who will miss their upcoming tour of South Africa after suffering a dislocated shoulder.

Comprising some of the top players from England, Scotland, Wales, and Ireland, the Lions were looking to tune up for their three-match series against the world champion Springboks.

The first Lions test on home soil since 2005 at times resembled a training run for the men in red, who crossed three times before halftime.

Josh Adams, Duhan van der Merwe and Robbie Henshaw touched down, while Welsh marksman Dan Biggar added the extras, for a 21-0 lead at the interval.

Ireland flanker Tadhg Beirne went over early in the second half before the visitors stepped up a gear and provided a somewhat more entertaining contest for the roughly 16,500 spectators in attendance.

Some sharp lineout play and quick ball movement in broken play helped the Brave Blossoms apply pressure ahead of Himeno's try. Yu Tamura made the conversion and also landed one of two penalty attempts in the match.

Speedster Kotaro Matsushima made a number of incisive runs, including a burst that allowed Himeno to cross in the 74th minute. Desperate Lions defense prevented grounding of the ball, however, and the visitors were unable to find a second try despite sustained late pressure.

"We gave 120 percent. I think the team did everything we could," said Matsushima, who is coming off a strong season for Clermont in the French Top 14 competition.

"I hadn't played an international for Japan in quite a while, but it was a good start."

Japan will play Ireland in Dublin on July 3, with the European side out to avenge their 19-12 loss to the Brave Blossoms at the 2019 Rugby World Cup.

Captain Michael Leitch said the Brave Blossoms must make a concerted effort to string phases together and avoid turning over the ball against Ireland, currently ranked No. 4 in the world.

"The Lions' experience and strength at the contact stopped us from playing the way we wanted, but we also learned a valuable lesson," Leitch said. "When we managed to continue our attacks, we were able to carry the ball into space. That's what we need to work on."