Foreign athletes competing at this summer's Tokyo Olympics and Paralympics could be kicked out of Japan if they violate regulations aimed at preventing the spread of coronavirus infections, according to a rule book released Tuesday.

The third and the newest version of the "playbook" with various COVID-19 countermeasures also said all athletes may face penalties for not complying with them, including a withdrawal of accreditation and the right to participate in the games, as well as facing a fine. 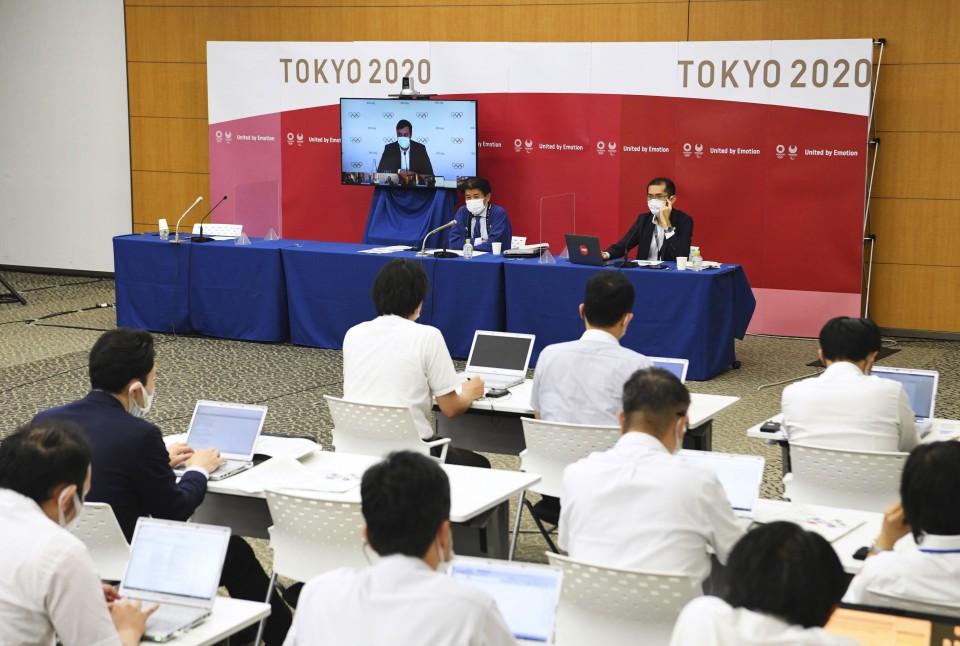 Organizers of the Tokyo Olympics and Paralympics hold a press briefing for the third and the latest version of the events' "playbook" rule book in Tokyo on June 15, 2021. (Pool photo) (Kyodo)

"There may be consequences imposed upon you in the event of a breach of these measures...including procedures for revocation of your permit of stay in Japan," it said, while noting that some of the steps are under the jurisdiction of Japanese authorities.

Christophe Dubi, the International Olympic Committee's executive director for the games, said at a press conference that a disciplinary commission will be in charge of deciding on a penalty when a participant infringes the rules.

As for financial sanctions, Dubi said, "There is no number at this point in time."

"What is in the playbook is a range, a range of possibilities. This is to give an overall impression of what could happen in case of sanctions," he said. "We will not speculate which case will lead to what sanction. This is the role of the commission."

The 69-page rule book, which was created by organizers with advice from the World Health Organization, specified how and when athletes -- whether Japanese or foreign athletes -- will be screened for the virus during the games, as well as what will happen if a participant tests positive.

However, health care experts have questioned whether the regulations will be effective enough to ensure the safety of the Japanese public and the Olympics, which are set to open on July 23 when highly contagious variants of the virus are raging in some countries.

Athletes, who will be screened for the virus on a daily basis, in principle, need to submit saliva samples either at 9 a.m. or 6 p.m. through COVID-19 liaison officers of their respective national Olympic committees, according to the organizers.

If saliva samples come back positive, the organizers will confirm the results with a polymerase chain reaction test using a nasal swab.

An infection control center set up by the organizing committee is responsible for confirming a positive COVID-19 test or deciding who came into close contact with someone who tested positive.

The center will coordinate with a support unit operated by officials of the IOC and the International Paralympic Committee.

The rules will take effect on July 1, the organizers said, adding it is possible to update the regulations ahead of the games. The playbook, which was last updated in April, also said it is possible for Japanese border measures to be strengthened as needed to deal with the spread of the new variants.

The playbooks for officials and workers, including those affiliated with corporate sponsors and the media, will be released at a later date.

The Tokyo Olympics and Paralympics will feature about 15,000 athletes from across the world. There will be up to about 78,000 officials and workers from overseas, less than half the initially planned 180,000.

With just over a month until the Olympic opening, IOC President Thomas Bach said last week that the organizers are in a "full delivery phase."

IOC Vice President John Coates arrived in Japan on Tuesday to oversee preparations. He stirred controversy earlier for saying the Tokyo Games can be held even when the capital remains under a state of emergency.

Tokyo and some other areas in the country are currently under a third state of emergency. The government will likely end the emergency on June 20 as a fourth wave of infections has somewhat abated.

However, the government is considering placing Tokyo under a quasi-state of emergency during the Olympics after many health experts expressed concern over a potential spike in COVID-19 cases.

A group of infectious disease experts, including Shigeru Omi, head of a government subcommittee on the virus, is expected to disclose this week the various health risks if the Olympics take place as scheduled.

Omi, the country's top COVID-19 adviser, has been apprehensive about staging the Tokyo Games, saying it is "not normal" to go ahead during a global health crisis.

The organizers, also including the Japanese and the Tokyo metropolitan governments, have already decided not to hold the major sporting event with spectators from overseas.

They will decide later this month on a policy regarding spectators who live in Japan, while the Japanese government is moving closer to allow at least some people to enter venues, as many as 10,000.