Japan's state-run mass COVID-19 inoculation centers started administering vaccine to people aged 18 or older Thursday, extending vaccinations beyond those aged 65 or over as many slots at the centers remain vacant.

The move came two days after the Defense Ministry, which runs the centers in Tokyo and Osaka, decided to remove age restrictions so as not to waste vaccine at the facilities where slots remained largely vacant for the period through June 27. 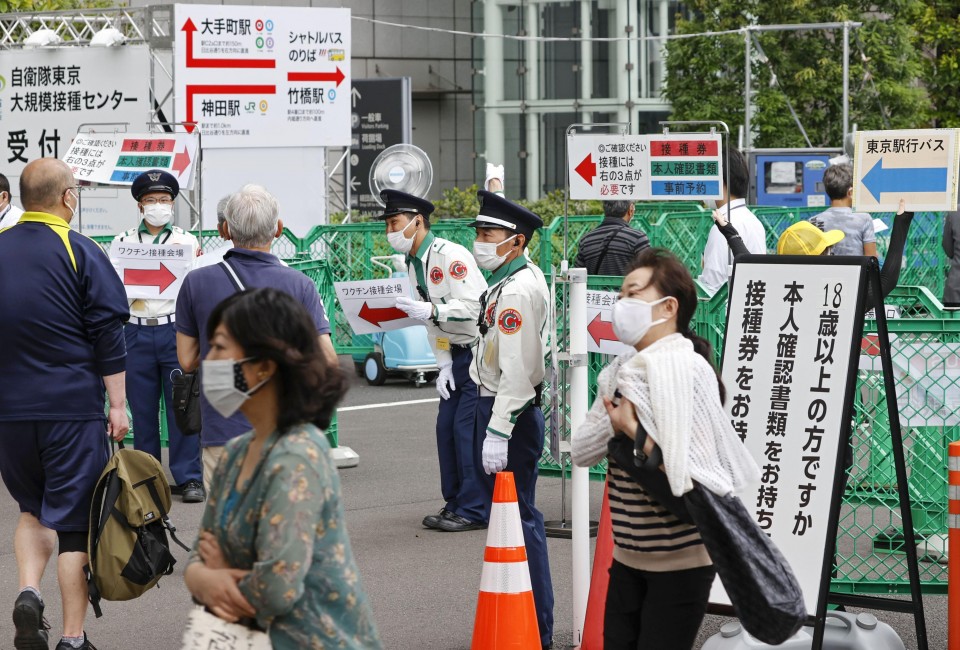 People head to a mass coronavirus vaccination center in Tokyo's Otemachi business district on June 17, 2021. The state-run vaccination center, set up last month to give shots to people aged 65 and older, started inoculating people aged between 18 and 64 the same day in an expanded drive to fill vacant slots. (Kyodo) ==Kyodo

The centers, which can inoculate up to 10,000 people per day in Tokyo and 5,000 in Osaka, administer U.S. pharmaceutical company Moderna Inc.'s two-dose vaccine, which is recommended for people aged 18 or older.

A vaccination coupon sent by a local municipality is required to make a reservation via the Defense Ministry's website, the Line messaging app service or a phone call.

"I was anxious about getting infected as face-to-face classes have resumed at my university. We take tests and submit reports around this time, so I'm slightly relieved after receiving a shot," said Ryoto Matsuda, a 21-year-old university student at the Tokyo center.

Ryuji Shimada, a 44-year-old employee at a Tokyo wholesale food company, said he had set an alarm for midnight Tuesday to make a reservation for a shot immediately after the start of the booking period.

"Since we're involved in the delivery of food items, I tried to get a shot early so our clients are relieved," he said. "We face a tough situation as sales have dropped and there is no compensation. I am waiting for the day when people can go out and dine like before."

Daisuke Kuroda, 50, who came to the Osaka center with his wife Kumiko, 47, from Himeji, Hyogo Prefecture, said, "We'd like to go to many places without wearing masks."

The centers were set up last month to accelerate Japan's vaccine rollout by supplementing the efforts of local municipalities. The country's vaccination rate lags far behind other developed countries.

The centers initially targeted people aged 65 or older living in seven prefectures in the Tokyo metropolitan and Kansai areas but the scope was later expanded to accept younger people nationwide.

Slots from June 28 onward, however, are mostly reserved for elderly people to receive second doses of the vaccine, with hardly any slots available for new reservations.

Meanwhile, Taro Kono, the minister in charge of the country's vaccination efforts, said Thursday the government may achieve this week its target of administering 1 million shots per day. He made the comments in an online meeting with Akio Mimura, chairman of the Japan Chamber of Commerce and Industry.