With the COVID-19 vaccination rollout just starting to gather steam in Japan, local governments have been figuring out how best to use surplus doses resulting from sudden appointment cancelations or no-shows -- and coming up with a variety of schemes.

The Ministry of Health, Labor and Welfare has requested in writing that each local government study and adopt "flexible measures" to address the question of whom should be administered leftover doses of vaccine that would otherwise be discarded. 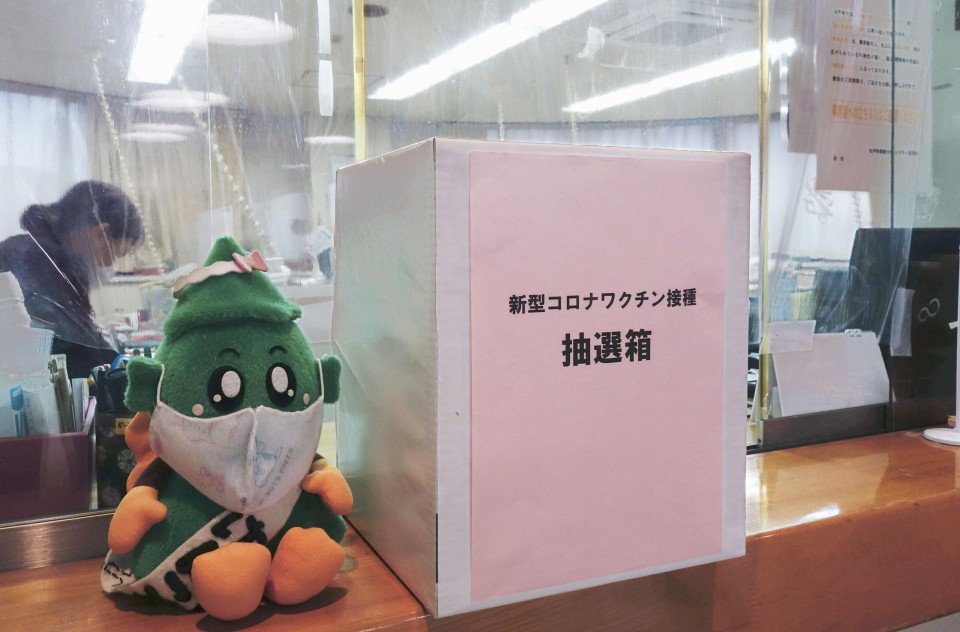 Photo taken on May 27, 2021 shows a box used in a lottery to choose people who will be administered extra doses of the COVID-19 vaccine in Sugito, Saitama Prefecture. (Kyodo)

As the vaccines, once thawed and diluted, must be used quickly, local governments are racking their brains to avoid having them go to waste -- devising schemes for waiting lists or targeting teachers, for instance, to receive the unused shots.

Takao Shiraiwa, mayor of Nanyo, Yamagata Prefecture, tweeted that he has instructed the city office to use surplus doses to vaccinate nursery and kindergarten teachers to "prevent COVID-19 clusters at facilities for infants." 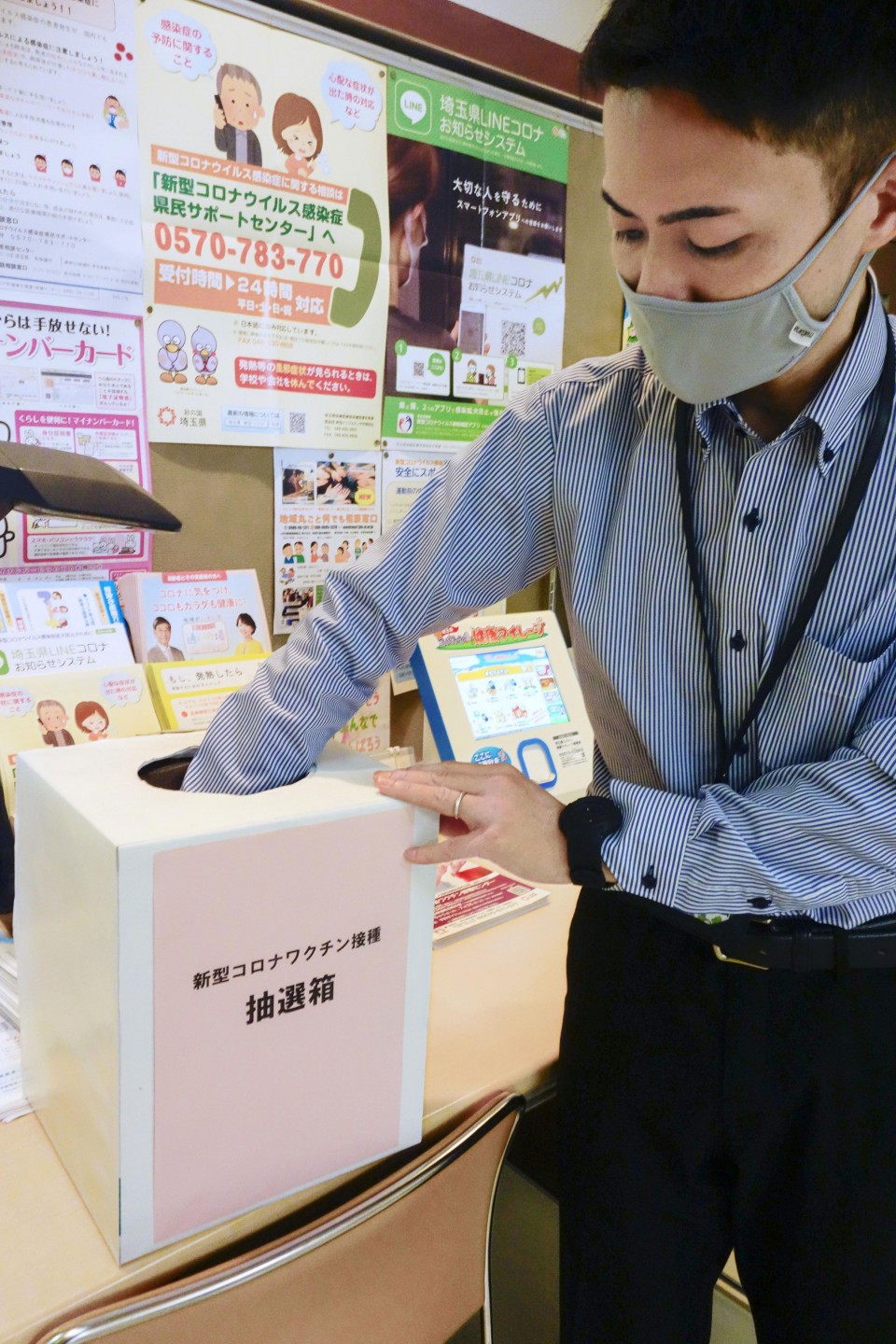 Photo taken on May 27, 2021 shows a local official reaching into a box used in a lottery to choose people who will be administered extra doses of the COVID-19 vaccine in Sugito, Saitama Prefecture. (Kyodo)

The Nanyo government has introduced a system in which nursery school teachers and others may wait on standby at home when vaccinations are conducted at facilities for the aged and then rush to the venue to receive inoculations if leftover doses are available at the end of the day.

The standby system has also been expanded to include home-care workers who might visit bedridden elderly persons.

If there are surplus doses after a day's vaccination, the office contacts elementary and junior high schools in Sanyo so that preregistered teachers and staff members can head to a vaccine site to receive a shot. At least 900 people have registered on the waitlist, according to the office.

In Toride, Ibaraki Prefecture, extra doses are given to social welfare workers aged 65 and older who have not yet made appointments for vaccinations because "they have many occasions to make contact with elderly people on home visits and consultations," a city official said.

In Hamura, Tokyo, officials were taken by surprise when more than 450 people aged 65 and over registered for a system it introduced to allow around five elderly people to wait on standby at the inoculation site in case of spare shots.

The standby list "gathered so many people even though there was no guarantee they would receive a shot at the site," one official said. 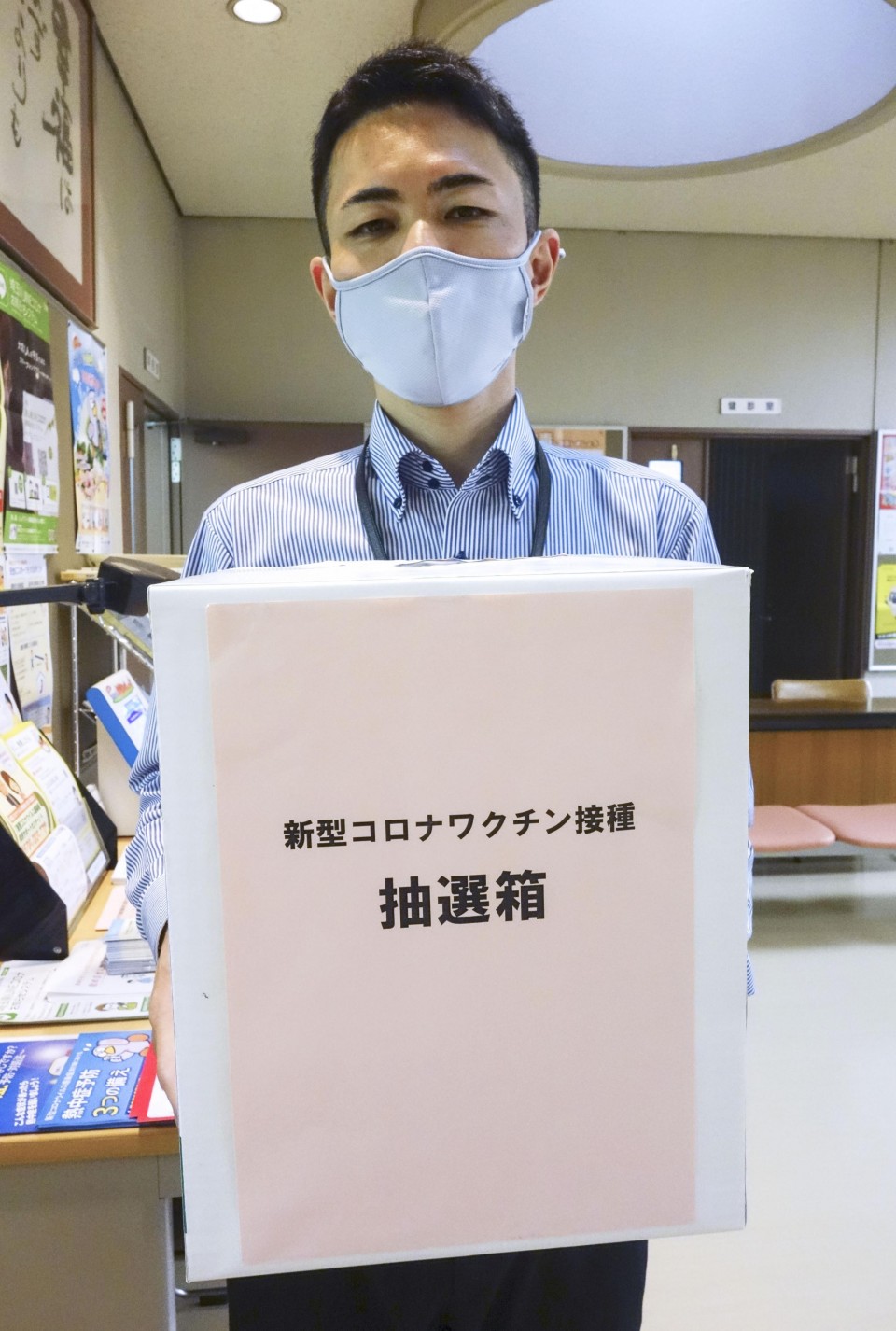 Photo taken on May 27, 2021 shows a local official holding a box used in a lottery to choose people who will be administered extra doses of the COVID-19 vaccine in Sugito, Saitama Prefecture. (Kyodo)

Meanwhile, the town office of Sugito in Saitama Prefecture has introduced a lottery system for those 65 and older who preregister for leftover vaccine doses. A town official draws the slips at random and the office then notifies the winners.

As of May 23, 17 of more than 300 people who registered for the lottery had gotten vaccinated.

The large number of registrants "shows that many people are eager to receive shots as early as possible," a town official said.

In the town of Tamamura, Gunma Prefecture, nearly 500 people registered on the vaccine waiting list in the first five days.

But the effort to diminish vaccine waste has also led to some confusion -- perhaps due to a lack of a thorough explanation on the part of local government officials.

The number of registrants on the waiting list in Gojo, Nara Prefecture, quickly reached some 250, but a city official said, "There are some elderly people who mistook the program for group vaccination appointments."

Yuni, a town in Hokkaido Prefecture, and Kainan City, Wakayama Prefecture, have thrown open the waiting list to anyone aged 16 or older. In Yuni, nearly 100 people, including those in their teens, have already registered.

"As our population is less than 5,000, we were afraid of having a shortage of applicants by limiting the waiting list to the elderly," a town official said. "We have drastically broadened the scope to minimize wasted vaccine as much as possible."