Japan and Australia underscored on Wednesday the importance of peace and stability across the Taiwan Strait for the first time in bilateral talks, while agreeing to deepen security cooperation amid China's rising assertiveness in the Indo-Pacific region.

The defense and foreign ministers of the two countries affirmed Japan's Self-Defense Forces will protect Australian military assets in noncombat situations in a move to bolster their "quasi alliance" in the face of China's military buildup and its assertive territorial claims in the East and South China seas. 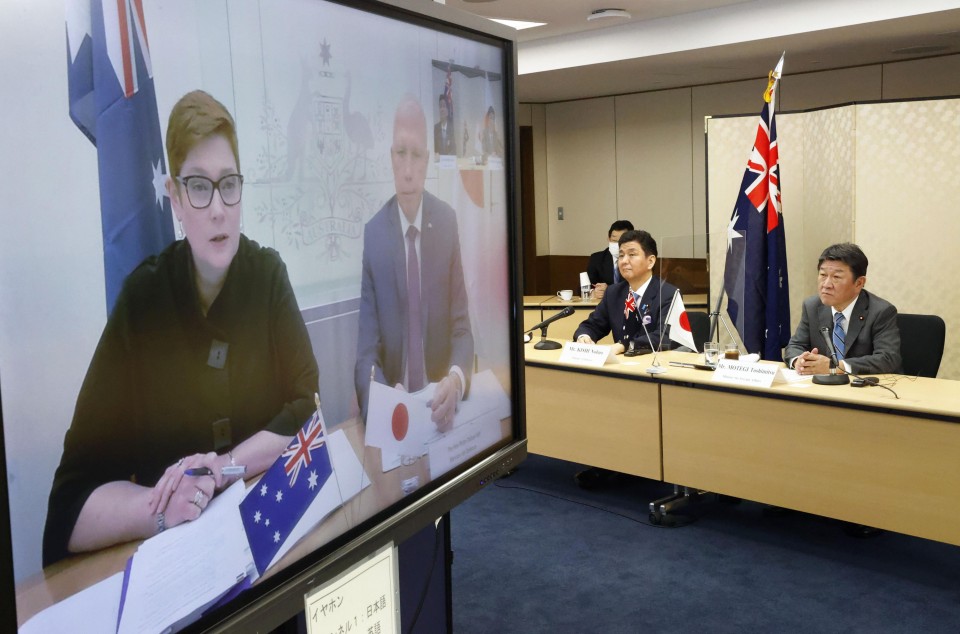 The development "will lead to boost interoperability between the SDF and the Australian forces and strengthen deterrence," Japanese Defense Minister Nobuo Kishi told reporters after the so-called two-plus-two virtual meeting.

In a joint statement issued after the meeting, the two governments said for the first time that they "underscore the importance of peace and stability across the Taiwan Strait and encourage the peaceful resolution of cross-strait issues."

It followed similar references to Taiwan in Japan's recent summit talks with the United States and the European Union.

The statement immediately drew ire from China, with the Foreign Ministry urging Tokyo and Canberra "to respect sovereignty and not to interfere in internal affairs of other country."

China regards Taiwan, a democratic, self-ruled island, as a renegade province to be reunited with the mainland by force if necessary.

Kishi and Foreign Minister Toshimitsu Motegi said they also shared with their Australian counterparts -- Peter Dutton and Marise Payne -- concerns over a recently enacted Chinese law that enables its coast guard ships to fire on foreign vessels in waters that Beijing deems its territory.

Kishi said Japan and Australia must "further deepen security cooperation" so that they can "proactively contribute to the peace and stability of the Indo-Pacific region."

As for the SDF protection of military assets, Australia became the second country, after the United States, whose assets Tokyo is allowed to protect under Japanese security legislation that came into force in 2016.

The law stipulates that SDF personnel are permitted to protect the military assets of other countries on condition that the foreign forces are engaged in activities contributing to the defense of Japan.

Kishi said the protection would be provided upon request from Australia.

The two countries had been coordinating the addition of Australia following an accord during their defense ministers' talks last October as part of efforts to strengthen vigilance and surveillance activities amid China's rise.

Kishi said the SDF would provide protection when Australia is gathering information on ballistic missiles, holding joint drills to improve its defense capability for Japan and engaged in transportation and supply activities during a crisis that could greatly affect Japan's security.

At the talks, the four ministers also agreed they will aim for an early conclusion of a bilateral pact aimed at facilitating joint exercises between their troops, according to Motegi.

According to the joint statement, the two countries reiterated their commitment toward "achieving the complete, verifiable and irreversible dismantlement" of North Korea's nuclear and other weapons of mass destruction programs as well as a resolution of Pyongyang's abductions of Japanese nationals in the 1970s and 1980s.

The ministers expressed "grave concerns" about the situation in Myanmar, urging the junta to immediately halt violence against its people and measures to suppress freedom of expression.

They also demanded the release of all those arbitrarily detained.

The ministers singled out China regarding human rights issues, saying they "share serious concerns" over Beijing's treatment of the Uyghur and other Muslim minorities in the Xinjiang autonomous region and its recent moves to weaken democracy and undermine rights and freedom in Hong Kong.