Hong Kong pro-democracy activist Agnes Chow was released from prison on Saturday after serving time for inciting an unauthorized protest in 2019.

Chow, 24, was convicted last year along with fellow activists Joshua Wong and Ivan Lam over their involvement in the protest on June 21, 2019, in which mostly young protesters besieged the city's police headquarters. 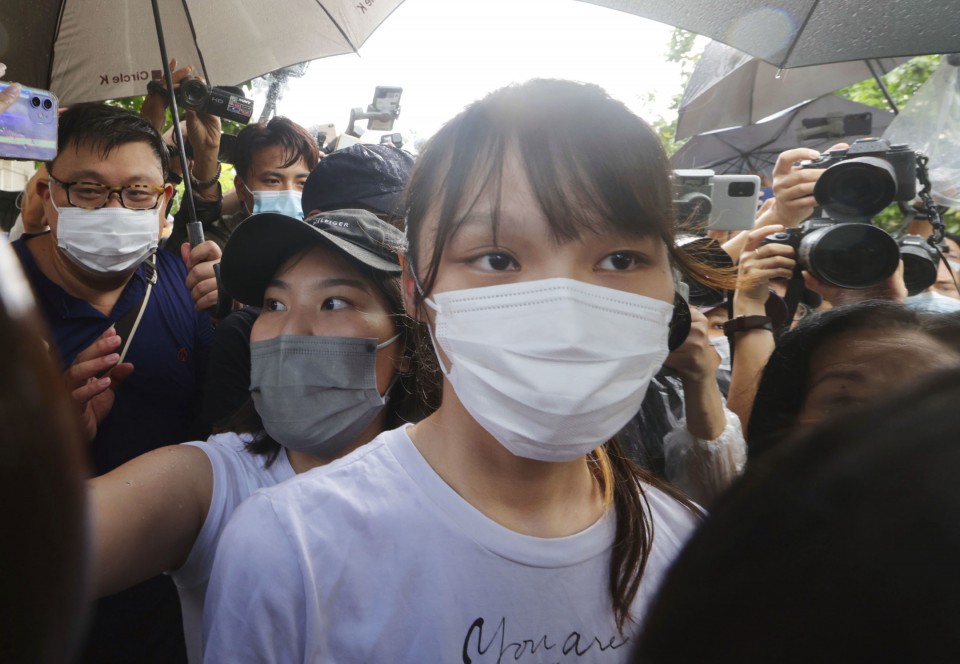 Chow, who was taken into custody on Nov. 23 with the other two, was sentenced to 10 months in prison on Dec. 2. Her sentence was reduced for good behavior, according to a source familiar with the matter.

After her release, Chow posted a black square to Instagram with the caption, "half a year and 20 days of pain, it's finally ended. I feel for all the friends who came out in the rain. Next, I'm going to take a good rest because I've become so thin and feeble during this period."

Even though she has been released, Chow could still be indicted over her arrest in August for allegedly violating a sweeping national security law. A lawyer who has assisted with Chow's case said Saturday that it is still unknown whether she will be charged.

Chow is likely to have to report to police occasionally as part of bail conditions for her release following her arrest in August.

The law, imposed by Beijing on Hong Kong late last June in the aftermath of the 2019 anti-government protests, criminalizes secession, subversion, terrorism and collusion with foreign forces and carries a maximum penalty of life imprisonment.

Donning a white T-shirt and her hair pulled back into a ponytail, a tired-looking Chow got off a prison vehicle leaving the Tai Lam Centre for Women at around 10 a.m. on Saturday. She then got into an awaiting van and left without speaking to the dozens of reporters and supporters gathered outside the prison.

Fellow activists Wong and Lam were sentenced to 13 and a half months and seven months in prison, respectively, over the unauthorized protest.

The protest occurred amid an intensifying anti-government movement that was spurred by a surge of opposition to the Hong Kong government's now-withdrawn plan to allow suspects to be sent to mainland China for trial.

Chow was one of the leaders of the 2014 Umbrella Movement that called for democratic change in the former British colony. Between 2019 and 2020, she, along with Wong and other members of advocacy group Demosisto, worked to bring international attention to the city's pro-democracy movement.

Her fluent self-taught Japanese language skills and activism via social media have helped her become popular in Japan, where some media have dubbed her the "Goddess of Democracy."

Among the others arrested in August was Jimmy Lai, founder of a media group that publishes the outspoken Apple Daily newspaper in Hong Kong. They were suspected of colluding with foreign forces, a crime punishable by life imprisonment under the national security law.

Lai was later indicted for violating the law.