Shohei Ohtani was called for two balks and threw a wild pitch in a two-run fifth inning, as he pitched, batted and played in the outfield in the Los Angeles' 6-5, 10-inning victory over the Arizona Diamondbacks on Friday.

The Japanese two-way player, who was not involved in the decision, pitched five innings and gave up the first of his two earned runs on the second of two balks. The second run scored on a wild pitch that cut the Angels' lead to 3-2 at Chase Field. 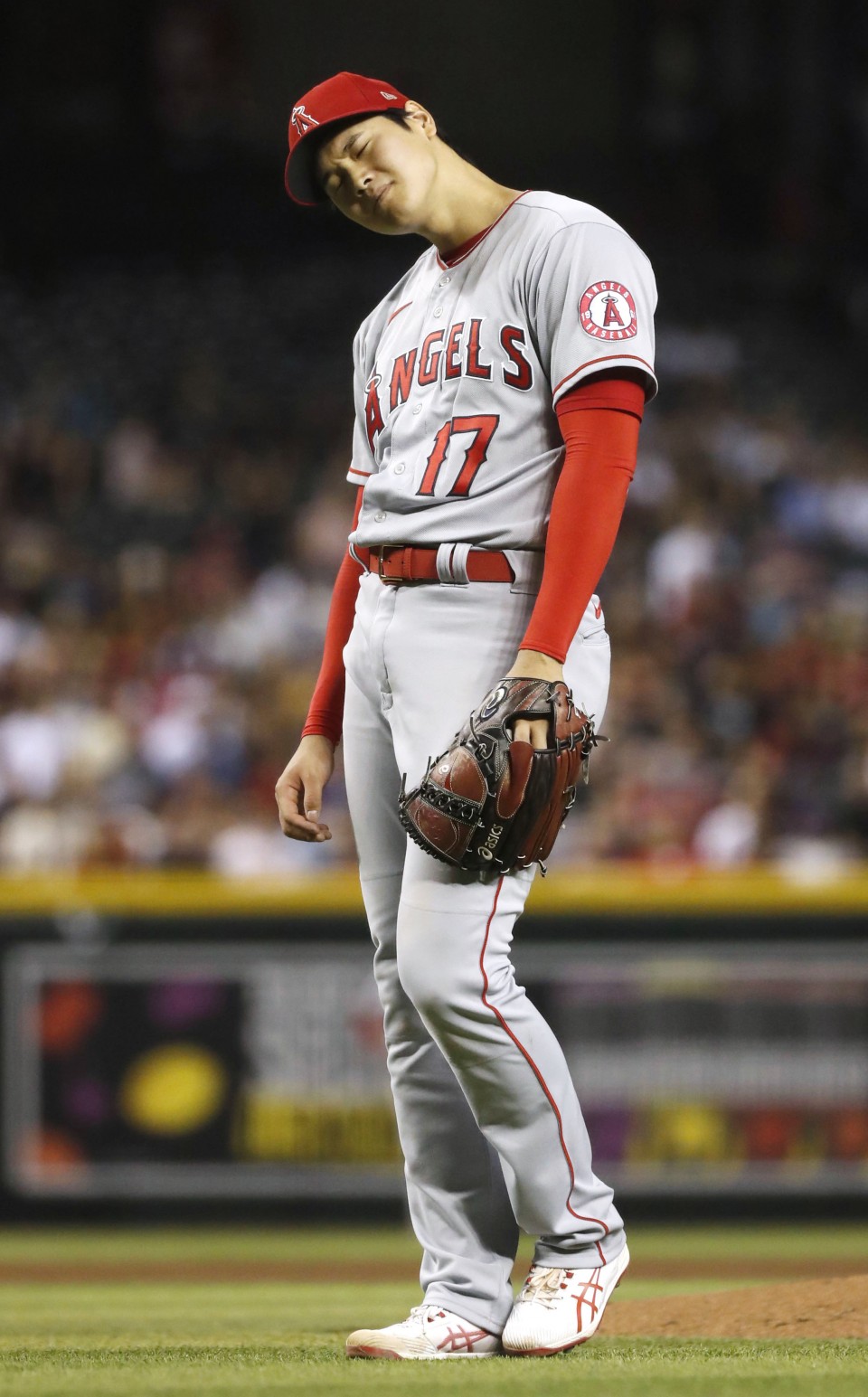 Los Angeles Angels two-way player Shohei Ohtani reacts after he was called for two balks in the fifth inning of a game against the Arizona Diamondbacks at Chase Field in Phoenix, Arizona on June 11, 2021. (Kyodo)

"The air was dry, so my fastballs weren't that good," Ohtani said.

"I couldn't get a good grip on the ball so my splitters didn't break that much. I had to use every trick possible. It's been a while since I've gotten so frustrated on the mound," he said of his reaction to back-to-back balk calls.

In his ninth pitching start this season, Ohtani allowed five hits while walking two, hitting one and striking out eight of the 24 batters he faced.

He went 2-for-4 with two doubles, drove in the Angels' second run in a three-run third and scored on an Anthony Rendon single to make it 3-0. He left the mound after the eventful fifth inning but stayed in the game in right field.

Angels catcher Kurt Suzuki, who drove in the team's first run, singled in another run in the sixth, but the Angels bullpen allowed two runs in the bottom of the inning as the Diamondbacks tied it 4-4.

Ohtani's seventh-inning double moved teammate Justin Upton to third, from where he scored on a wild pitch to restore the Angels' lead. With the lead in hand, Ohtani finally left the game in the bottom of the inning.

Arizona infielder Eduardo Escobar homered to tie the game at 5-all in the bottom of the ninth and force a 10th inning.

In the 10th, Jared Walsh, who started on second base as MLB's extra-innings "ghost runner," advanced to third on a balk by Ryan Buchter (0-1) and scored the eventual game winner on an RBI groundout by pinch hitter Max Stassi. Raisel Iglesias (4-2) earned the win.

At Fenway Park in Boston, Boston Red Sox reliever Hirokazu Sawamura pitched two-thirds of an inning and gave up a two-run sixth-inning homer to Vladimir Guerrero Jr. in a 6-5 walk-off victory over the Toronto Blue Jays. Sawamura entered with one out and one on in the sixth.