It is rare for North Korea to use the expression "food crisis" when describing the state of the nation, raising concern that its citizens are facing difficulties in obtaining daily necessities with trade stifled amid the novel coronavirus pandemic.

North Korean leader Kim Jong Un was quoted by the official Korean Central News Agency as saying at the gathering that the food situation is "getting tense," as the nation's agricultural sector was devastated by powerful typhoons and flooding last year. 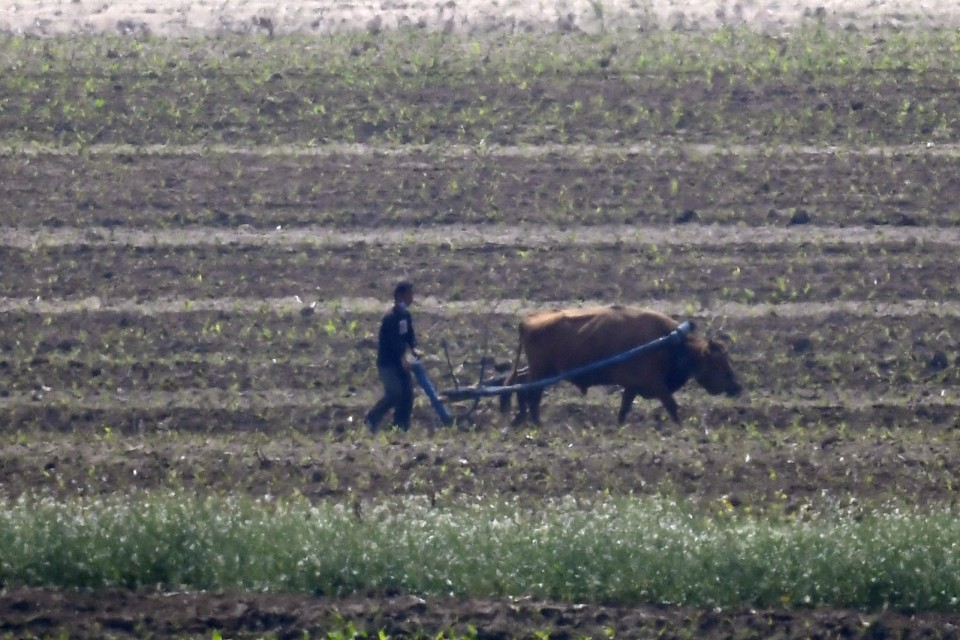 Photo taken from the Chinese city of Dandong on June 7, 2021, shows a worker farming with a cow in a field in North Korea's Uiju county. (Kyodo)

KCNA reported Friday that the plenary meeting talked about how to "stabilize and improve the people's living." But Korean Central Television has said the agenda was called "emergency measures to overcome the present food crisis."

North Korea's economy has languished further as the global outbreak of the virus has choked the country's trade with China and the farming industry has become sluggish.

Although Pyongyang claims it has had no virus infections, the nation has cut off traffic to and from China and Russia since early last year, with fears growing that the virus -- first detected in the Chinese city of Wuhan in late 2019 -- may spread across its borders.

China is known as Pyongyang's closest and most influential ally in economic terms. North Korea depends on China for more than 90 percent of its trade.

North Korea is believed to be vulnerable to infectious diseases against a backdrop of chronic shortages of food and medical supplies triggered by international economic sanctions aimed at thwarting its nuclear and ballistic missile ambitions.

China's ambassador to North Korea, meanwhile, stressed the importance of bilateral relations in a rare op-ed published Monday in the Rodong Sinmun, the newspaper of the Workers' Party.

Li Jinjun said North Korea has developed under the leadership of Kim and it has been taking effective steps to prevent the entry of the virus.

Sunday marked the 2nd anniversary of Chinese President Xi Jinping's first visit to North Korea since he came to power in 2013. Li is scheduled to be replaced by Wang Yajun, a senior official of the ruling Communist Party, in the not-so-distant future.