SAPPORO - The Japanese government plans to impose tougher restrictions under a quasi-state of emergency in five more prefectures amid growing calls for quicker response to an increasing number of infections caused by highly contagious variants of the coronavirus, sources familiar with the matter said Thursday.

The measures, expected to include telling restaurants to close early, will be in place from Sunday through June 13 in some municipalities in Gunma, Ishikawa, Okayama, Hiroshima and Kumamoto, the sources said.

The prefectures will be added to eight areas currently under a quasi-state of emergency -- Hokkaido, Saitama, Chiba, Kanagawa, Gifu, Mie, Ehime and Okinawa. 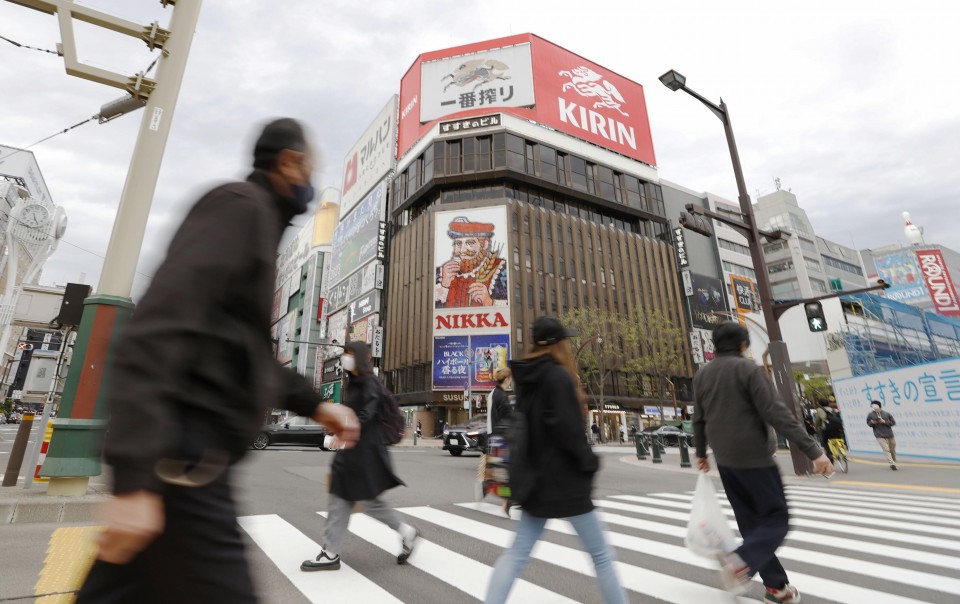 People wearing face masks walk in Sapporo's Susukino commercial and entertainment district on the northernmost Japanese main island of Hokkaido on May 13, 2021. (Kyodo)

Concerns are growing over the worsening situation in Japan with less than three months until the Tokyo Olympics. Hospitals remain under increasing strain from the surge in infections, exacerbated by the spread of the highly contagious N501Y mutation, which accounts for more than 90 percent of infections in most parts of the country, according to the National Institute of Infectious Diseases.

The National Governors' Association earlier in the week voiced disapproval of the government's slow implementation of a quasi-state of emergency and asked it to consider expanding a state of emergency nationwide.

Prime Minister Yoshihide Suga told reporters the government will consult with experts on Friday regarding the decision, adding he will also consider whether additional steps are needed on Hokkaido, which saw another record number of new coronavirus cases on Thursday.

Hokkaido Gov. Naomichi Suzuki said he plans to ask the government to declare a full-fledged emergency in the Hokkaido capital Sapporo, allowing him to impose stronger restrictions with bigger fines for noncompliance.

Six areas are currently under a full-fledged emergency -- Tokyo along with Aichi, Osaka, Hyogo, Kyoto and Fukuoka prefectures -- with tougher restrictions in place until the end of May.

But the government is instead looking to expand the number of cities on the northernmost main island covered by the quasi-state of emergency beyond Sapporo, where restaurants and karaoke establishments are being asked to close by 8 p.m. and refrain from serving alcohol, according to a source familiar with the matter.

Hokkaido reported 712 new coronavirus cases on Thursday, 499 of which were confirmed in Sapporo, with a total of six deaths from COVID-19.

Speaking to reporters after meeting with health minister Norihisa Tamura and Yasutoshi Nishimura, the minister in charge of Japan's coronavirus response, Suga said the situation on Hokkaido is "severe."