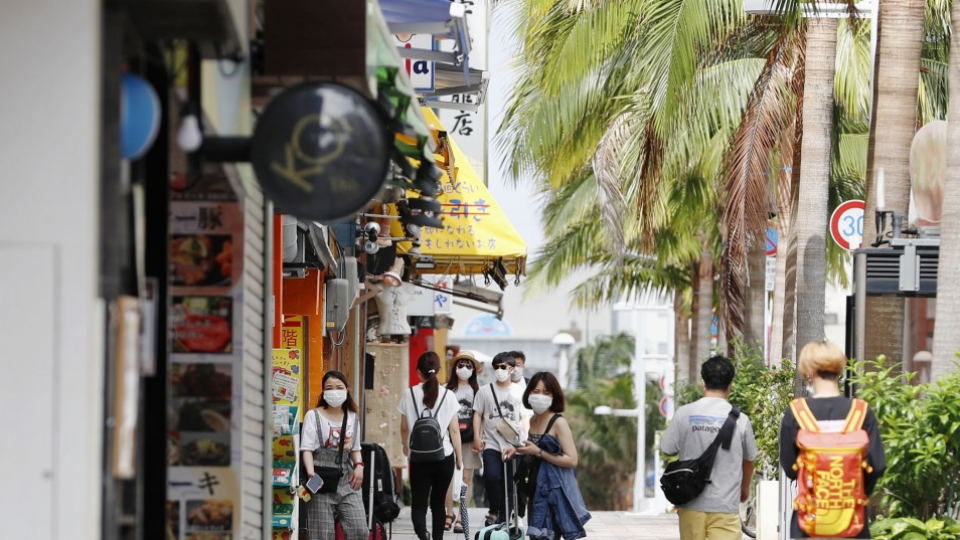 People wearing face masks walk on a main street in the southern Japan city of Naha on May 23, 2021, as a state of emergency takes hold in Okinawa Prefecture amid surging coronavirus infections. (Kyodo) ==Kyodo

TOKYO - Japan's top government spokesman on Sunday referred to the possibility of extending a state of emergency over the novel coronavirus in Tokyo, Osaka and seven other prefectures beyond the May 31 expiration date.

The government "will discuss whether to scale down (the state of emergency) to quasi-emergency measures, or to bring (the nine prefectures) back to a normal state if a certain period of continuation of the (state of emergency) declaration significantly improves the situation," Chief Cabinet Secretary Katsunobu Kato said on an NHK program.

TOKYO - The Defense Ministry said Sunday it has inoculated some Self-Defense Forces members with the coronavirus vaccine developed by Moderna Inc. of the United States before they run mass vaccination centers in Japan.

The move also involved nurses from the private sector who will work at the centers which will open in Tokyo and Osaka on Monday for inoculations of the elderly.

TOKYO - Though a Japanese athlete has yet to withdraw from the Tokyo Olympics due to coronavirus concerns, more are weighing in on the risks and potential downsides of a decision to move forward with holding the Summer Games during the pandemic.

With exactly two months to go until the July 23 opening ceremony, Tokyo is under a third coronavirus state of emergency, but organizers continue to say they are still not considering canceling the Olympics.

The game which doubled as the national championship was also a finale for Panasonic wing and former Japan international Kenki Fukuoka and marked the end of Suntory fly-half and New Zealand All Blacks star Beauden Barrett, who came to Japan on a one-year deal.

MOSCOW - The Soviet Union sought to settle a territorial dispute with Japan in 1972 by handing over two of four disputed islands off Hokkaido in response to improving China-Japan relations, declassified documents obtained by Kyodo News showed Sunday.

KASHGAR, China - A former Muslim leader at China's largest mosque in the country's far-western Xinjiang region was incarcerated by Chinese authorities in 2017 as he was accused of having spread extremism, sources close to the matter said Sunday.

In addition to the person who led prayers in the mosque, other religious leaders have been also detained, the sources said, amid accusations that the Communist-led government has infringed on the human rights of the Muslim Uyghur minority in the region.

The race started on Saturday morning at the Yellow River Stone Forest tourist site in Baiyin. From the afternoon, freezing rain lashed the region and participants suffered from physical discomfort and the sudden drop in temperature, the official Xinhua News Agency reported.

TOKYO - More Japanese government officials and Tokyo Olympics and Paralympics organizers are inclined to allow a certain number of spectators at this summer's games if thorough anti-coronavirus measures are taken, sources close to the matter said Saturday.

The sources' remarks come just two months before the opening of the Olympics on July 23, and despite growing public calls for canceling the events due to skepticism about the ability of the organizers to contain the spread of the virus.