Japanese Foreign Minister Toshimitsu Motegi and his U.S. counterpart Antony Blinken on Monday agreed to step up cooperation in dealing with issues related to China and reconfirmed the importance of maintaining stability and peace across the Taiwan Strait.

In their second in-person meeting, Motegi and Blinken confirmed that the two countries will "strongly oppose" any unilateral attempts by China to change the status quo by force in the East and South China seas, as pledged by their leaders last month in Washington, the Japanese Foreign Ministry said. 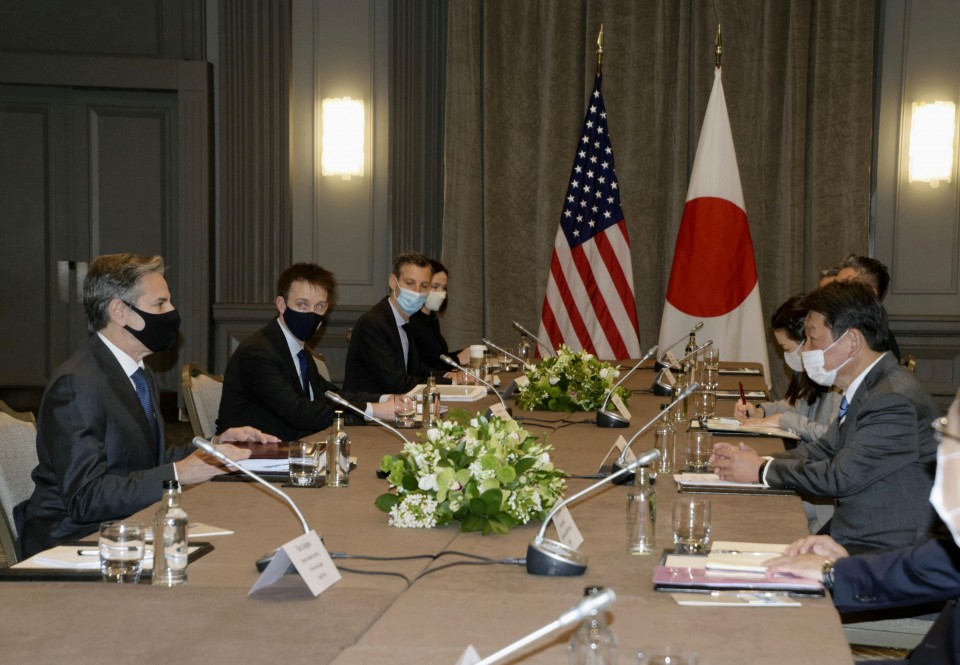 On North Korea, the top diplomats during their discussions in London agreed that they will work closely toward its denuclearization in accordance with U.N. Security Council resolutions, according to the ministry.

It said Blinken, who previously met Motegi in Tokyo in March, explained to the minister the administration of President Joe Biden's updated policy toward Pyongyang, but refrained from providing further information.

The Biden administration has recently completed a policy review on North Korea, with White House Press Secretary Jen Psaki saying Friday it will pursue a "practical" approach toward ridding North Korea of its nuclear weapons and will not focus on striking a grand bargain.

The talks between Motegi and Blinken were held ahead of a three-day meeting of foreign ministers of the Group of Seven industrial nations.

They also shared "serious concerns" over a continued military crackdown on protesters in Myanmar and agreed to urge the junta to immediately stop violence against civilians, according to the ministry.