Roughly 420 track-and-field athletes went through their paces Sunday inside an empty National Stadium, where COVID-19 countermeasures were in place with nine of the athletes coming from overseas.

Thirty-three events -- 16 for men and 17 for women -- went ahead at the newly built Tokyo Olympics main venue, despite the cloud which now hangs over the games' prospects due to a state of emergency in Japan's capital through the end of this month. 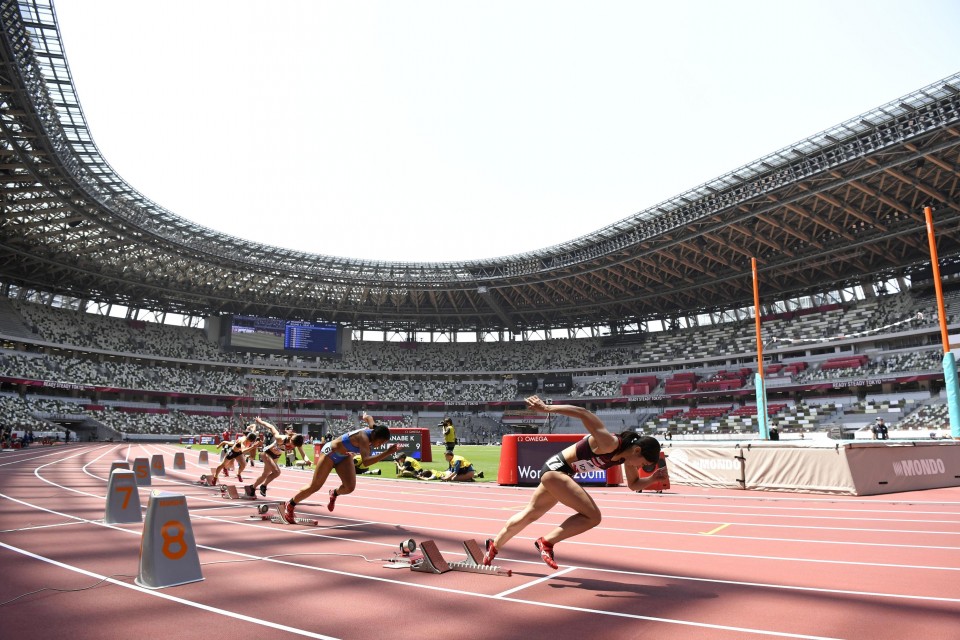 A group of around 100 people outside the venue protested holding the Tokyo Olympics. They demanded peoples' lives be given a higher priority than the Olympics at a time when doctors, nurses and the nation's health care system are facing extraordinary stress.

The test event was separated into day and evening sessions -- the latter doubling as a World Athletics Continental Tour Gold meet.

Organizers originally wanted fans in attendance, but that was before a resurgence in infections prompted the declaration of a new state of emergency on April 12.

"I understand nine athletes coming for a test event is very different from thousands of athletes coming to this city over the course of the summer months. But (in Poland) we had 31 countries, we had 700 competitors, and not one of those competitors left having tested positive and the protocols and the systems in place were clear," Coe said.

"There's not an athletics federation that will be coming here that doesn't understand the importance of following the rules and regulations that we ourselves have laid down in conjunction with your local and public health authorities." 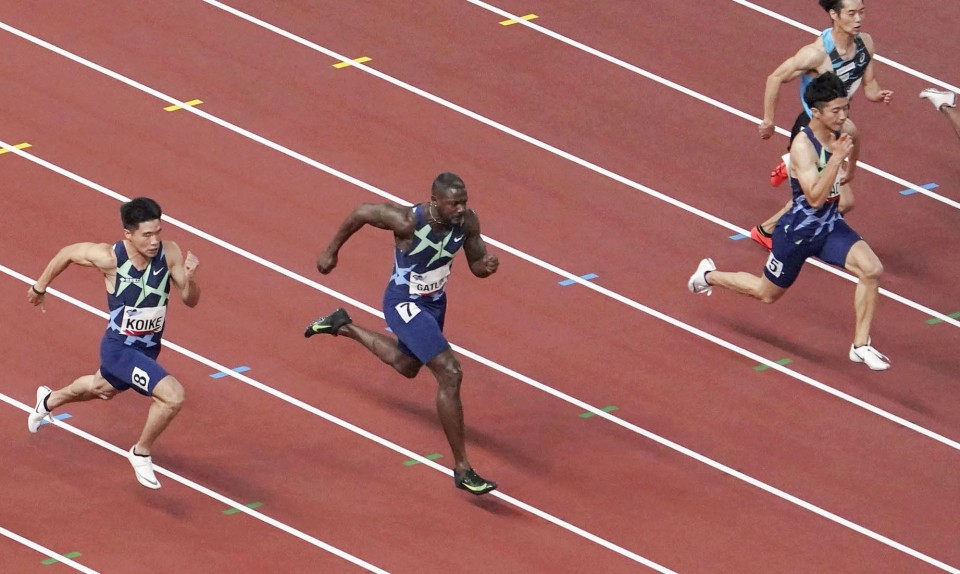 Justin Gatlin (2nd from L) of the United States runs en route to winning the men's 100-meter final in an Olympic test event for athletics at National Stadium in Tokyo on May 9, 2021. (Kyodo) ==Kyodo 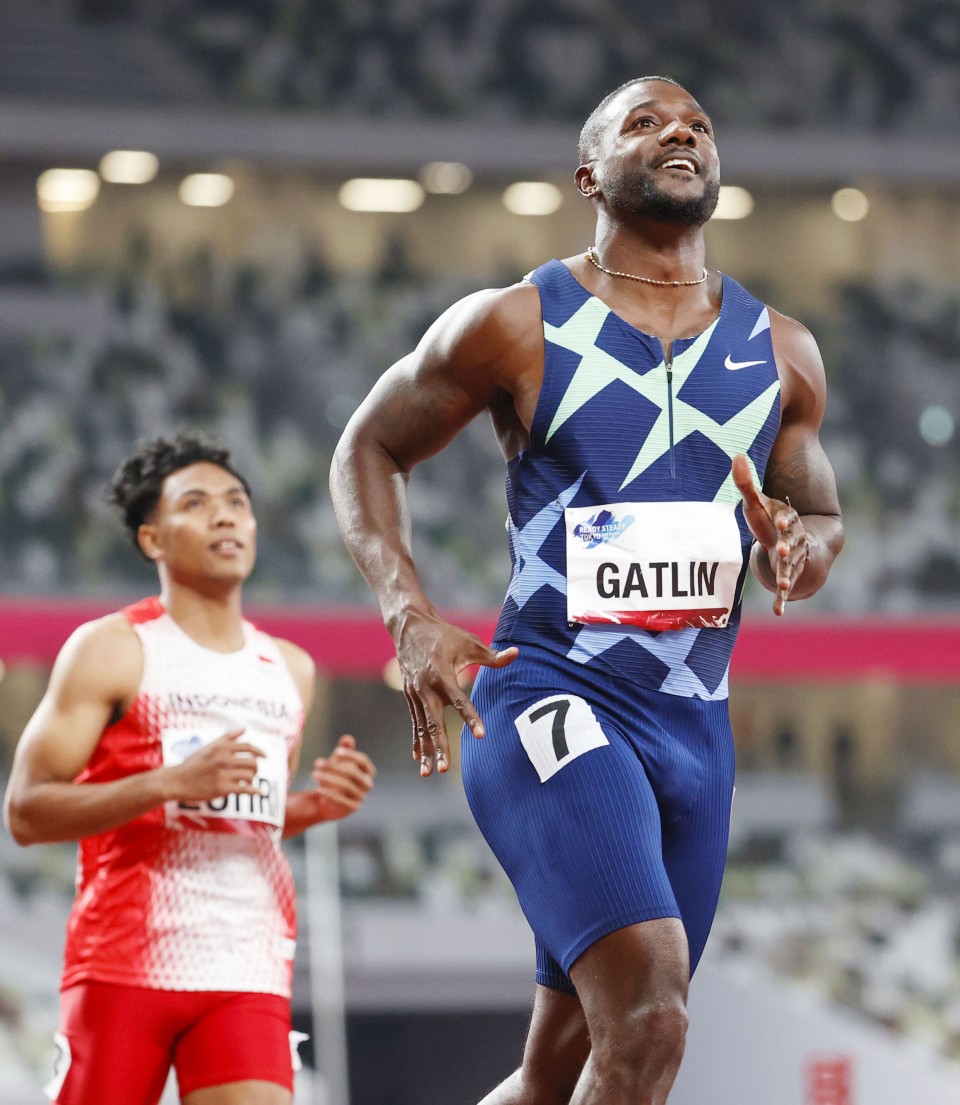 Justin Gatlin (R) of the United States reacts after winning the men's 100-meter final in an Olympic test event for athletics at National Stadium in Tokyo on May 9, 2021. (Kyodo) ==Kyodo

"I felt good, I had to work on my start, had a cramp in my calf in the prelims but I took some time and rested," Gatlin said.

"I love it, great stadium...even though there's not a lot of people, Japanese runners are going to come with all their fire."

The host nation's top sprinters had a disappointing evening as Yoshihide Kiryu, who in 2017 became the first Japanese to run below 10 seconds with a 9.98-second 100, was disqualified for a false start in the preliminaries.

Yuki Koike, who also boasts a 9.98 personal best, was another 0.02 seconds behind Tada in the final, settling for third. The Japan record of 9.97 was set by Abdul Hakim Sani Brown in 2019.

Ryuji Miura set a national record in the men's 3,000 meters steeplechase of 8:17.46 to beat the qualification standard for the Olympics.

Kazuki Kurokawa won the 400 hurdles in 48.68, with Hiromu Yamauchi second and Masaki Toyoda third, all three surpassing the qualification standard. 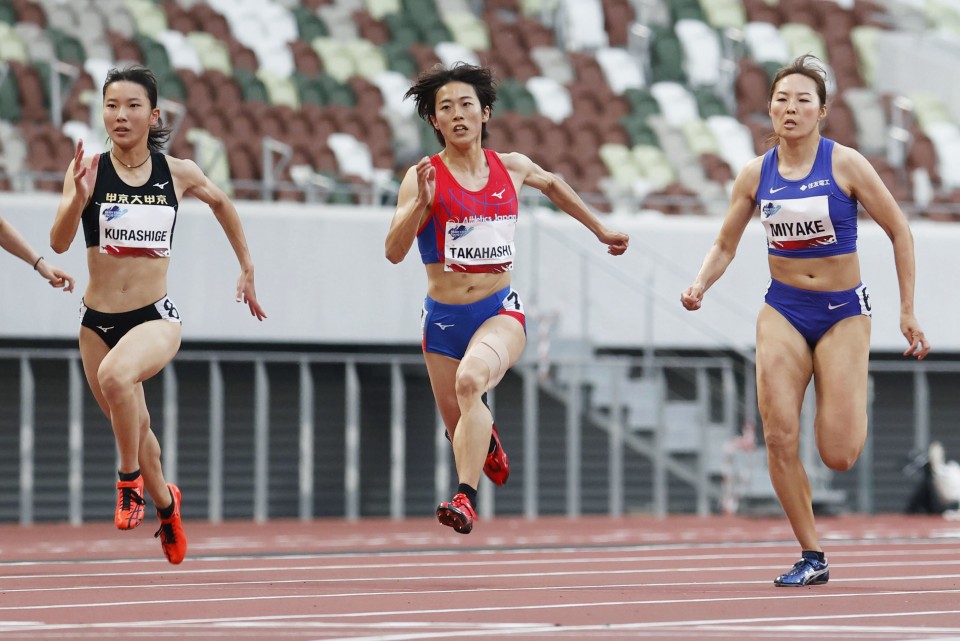 Asuka Takahashi (C) of Japan runs en route to winning the women's 100-meter final in an Olympic test event for athletics at National Stadium in Tokyo on May 9, 2021. (Kyodo) ==Kyodo