Dining establishments, wholesalers and tourism operators in areas set to come under tougher COVID-19 restrictions reacted with a mixture of resignation and hope that the measures will speed up a return to normality. 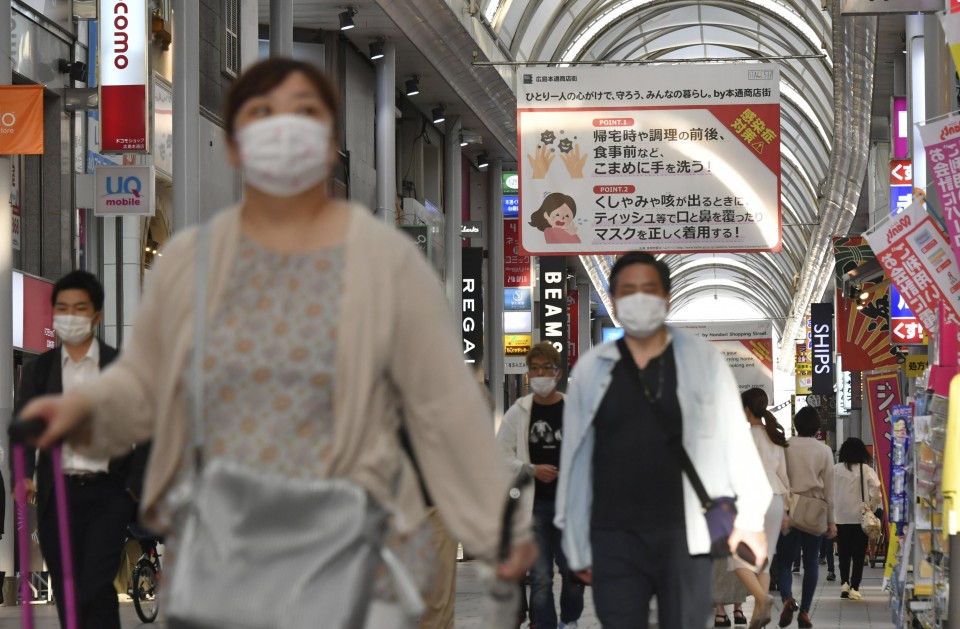 People wearing face masks walk along a shopping street in Hiroshima, western Japan, on May 14, 2021. The Japanese government decided the same day to add Hokkaido, as well as Okayama and Hiroshima prefectures to the ongoing coronavirus state of emergency from May 16. (Kyodo) ==Kyodo

Norimasa Toyota, 55, operator of an "okonomiyaki" pancake restaurant in the city of Hiroshima, western Japan, said while he felt the measures were appropriate, they came too late.

"I think we need to take thorough measures without limiting them to certain areas. I'll cooperate if that's what it takes," he said.

In areas placed under the state of emergency, restaurants are being told to close by 8 p.m., with those serving alcohol or offering karaoke services required to remain shut altogether.

"I'm fine with temporarily not being able to sell (alcohol) as long as the proper measures are taken so life can return to normal and I can resume selling," said Kenji Araki, 80, who runs a wholesale liquor store in the city of Okayama.

But Nobuyuki Hasegawa, director general of the tourism association of the Jozankei Onsen hot spring resort in the outskirts of Sapporo, lamented that the outlook for tourism this year was even bleaker than the last.

"There are almost no group tourists, and some major hotels have temporarily closed. Last year, there were some positive signs after June, but this year, the future is not clear at all," he said.

Masayuki Oka, an assistant manager of the Omicho fish market in the center of Kanazawa, one of the areas to come under quasi-emergency measures, said, "If the measures had been applied before the (Golden Week) holidays, I don't think infections would have spread this far."

Expressing concern that requests for people to stay at home would result in a drop in sales, the 45-year-old also called for more government support for wholesalers directly connected to restaurants.

In Gunma Prefecture, a 58-year-old taxi driver waiting for customers in front of Maebashi Station criticized the government for its lack of foresight, saying, "Putting quasi-emergency measures in place after infections have surged makes no sense."