Japan's economy in fiscal 2020 shrank a real 4.6 percent from the previous year, the sharpest annual contraction on record, as the coronavirus pandemic dealt a debilitating blow to consumption and exports, government data showed Tuesday.

Down for the second straight year, the decrease in real gross domestic product, the total value of goods and services produced in the country adjusted for inflation, is the largest annual contraction since data began to be compiled in fiscal 1955, according to preliminary data released by the Cabinet Office.

The previous record contraction was a 3.6 percent shrinkage in fiscal 2008 logged in the wake of the global financial crisis. 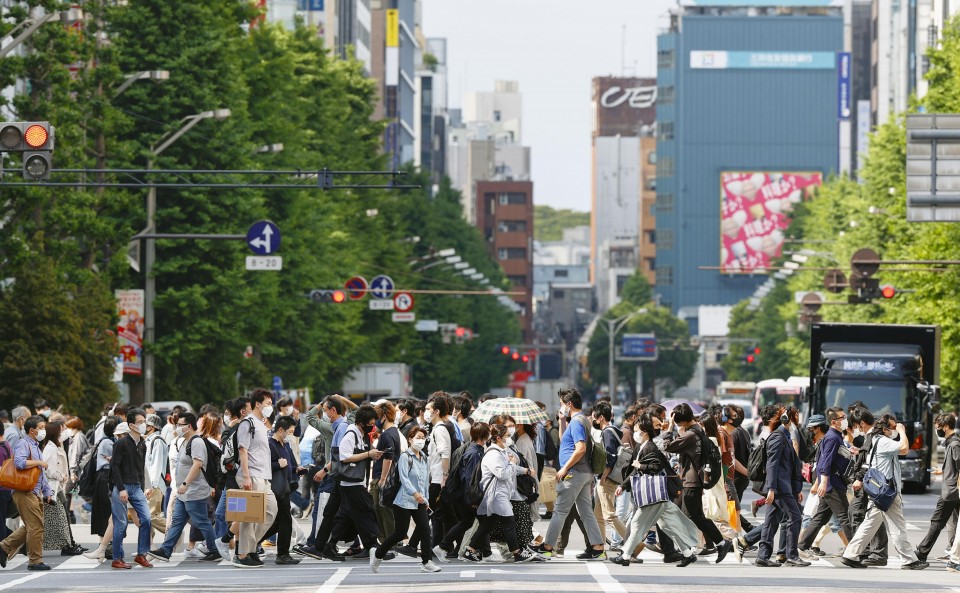 People wearing face masks walk at a crossing in Tokyo's Akihabara area on May 15, 2021, as the capital remains under a coronavirus state of emergency. (Kyodo) ==Kyodo

The data also showed that GDP in the January-March period shrank an annualized real 5.1 percent from the previous quarter, the first shrinkage in three quarters, corresponding to a 1.3 percent contraction on a seasonally adjusted quarterly basis.

Private consumption plunged 6.0 percent in the fiscal year through March, as people refrained from eating out and taking trips for fear of contracting the novel coronavirus.

Exports of goods and services plummeted 10.4 percent, as many major cities overseas were put under hard lockdowns, dampening demand for Japanese products such as cars and auto parts.

Imports declined 6.8 percent due to a fall in the prices of energy resources including crude oil and liquefied natural gas, easing the GDP shrinkage.

The pandemic deepened uncertainty over the economic outlook for companies, causing capital expenditure, another key pillar of domestic demand, to dive 6.9 percent and private residential investment to plunge 7.1 percent.

"It was a record shrinkage, but at the time of the global financial crisis, considerable GDP drops were marked in the two fiscal years of 2008 and 2009," said Atsushi Takeda, chief economist of the Itochu Research Institute. "So we can't judge yet, with just the latest figure, whether the coronavirus shock is bigger."

As for the latest quarter to March, the GDP figure was worse than the average projection of an annualized 4.61 percent shrinkage by private-sector economists.

Facing a resurgence of virus infections since November, the government declared its second state of emergency in early January for the Tokyo metropolitan area, and expanded it to 11 out of Japan's 47 prefectures within a week. It was fully lifted in late March.

With requests for people to stay at home, and restaurants and bars to shorten operating hours to curb the virus spread, the measure led to a sharp drop of 1.4 percent in private consumption, which accounts for more than half of Japan's GDP, in the reporting quarter from October to December.

The government's "Go To Travel" subsidy program, launched last July to ease the fallout from the virus on the tourism sector, has been suspended nationwide since late December in response to a spike in virus cases, weighing on consumer and government spending.

"The impact of the virus on individual spending on face-to-face services was especially significant, especially on eating out," a government official told reporters.

Exports increased 2.3 percent in the January-March period on the back of brisk shipments of electronic components and capital goods to Asian nations including China. But the pace slowed following an 11.7 percent expansion registered in the previous quarter.

Looking ahead, some analysts predict Japan will continue to see a contraction in the current April-June period, as another emergency issued late last month now covers Tokyo and eight prefectures amid the spread of more contagious virus variants, with the country lagging behind other major economies in its vaccine rollout.

"The April-June GDP depends on exports, since consumption will continue to fall and capex will stay flat at best," said Itochu Research's Takeda. "I think exports will rise, supported by rebounding demand in the United States. If not, Japan could see negative growth again."

In nominal terms, or unadjusted for price changes, the economy shrank 4.0 percent in fiscal 2020, and 1.6 percent, or an annualized 6.3 percent, in the reporting quarter.

Revised GDP data for the reporting quarter and fiscal year is scheduled to be released on June 8.