The global best-selling Japanese manga series "Shingeki no Kyojin," known as "Attack on Titan" in English, concluded in April, arousing a torrent of emotional responses from fans.

Written and drawn by Hajime Isayama, 34, the series depicts a grueling series of battles taking place on an epic scale between humans and gigantic man-eating humanoids referred to as Titans. Many fans took to the internet after the last episode to declare the saga a brutal but truly beautiful story.

Cleverly illustrating the fate and despair of humans as they find themselves unable to escape conflict, the story attracted readers both at home and abroad by resonating with the chaotic modern times we live in. 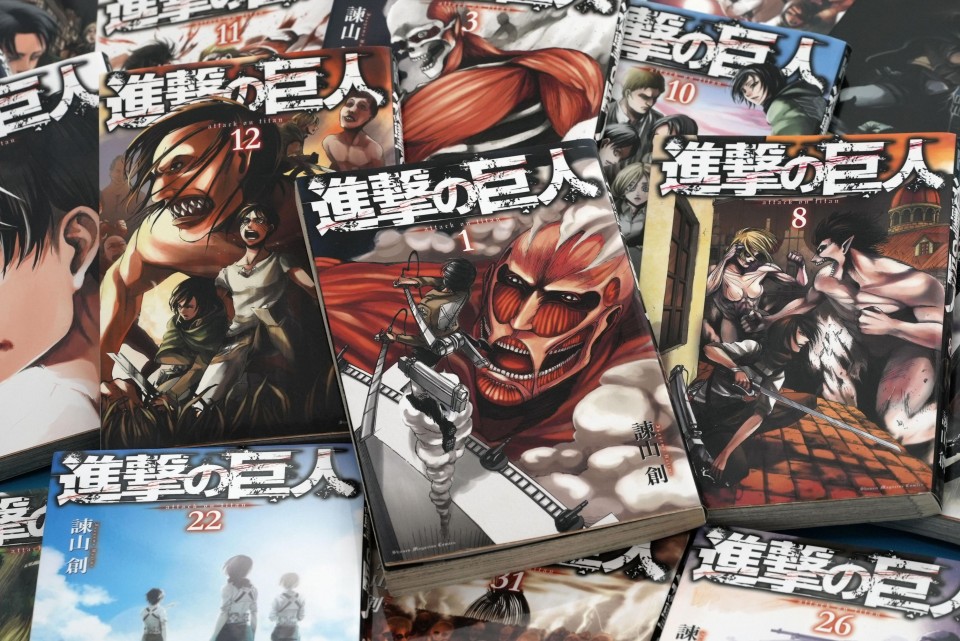 "Shonen," or "boys," manga such as "Attack on Titan" are marketed toward young males in their early to late teens. Kodansha Ltd. has published more than 100 million independent volumes of the series, including online versions, around the world.

The story's climax, which was enthusiastically received by fans worldwide, was carried in the May edition of Kodansha's monthly Bessatsu Shonen Magazine released on April 9.

"Attack on Titan" started in 2009, the year after the global financial crisis triggered by the collapse of major U.S. investment bank Lehman Brothers Holdings Inc. -- thus coinciding with a time when people were starting to call existing values into question, experts say.

Noting that the series thoroughly encapsulates today's politics, critic Shunsuke Sugita, 46, said, "No other shonen manga out there has so vividly integrated the gritty social atmosphere of the past decade."

The protagonist of the story is Eren Yeager, a teenage boy raised in a world where humans live in cities surrounded by three enormous walls to protect them from the Titans.

Eren swears revenge on the Titans who destroyed his town and devoured his mother. Joining the military to fight the Titans while seeking freedom for his people, Eren "represents the right of revolt and right of resistance against political corruption," Sugita said.

At times, the story featured fascinating clashes of political thought between Eren's seeking "justice" to an excessive extent and his companions who call for a more tempered approach through dialogue. 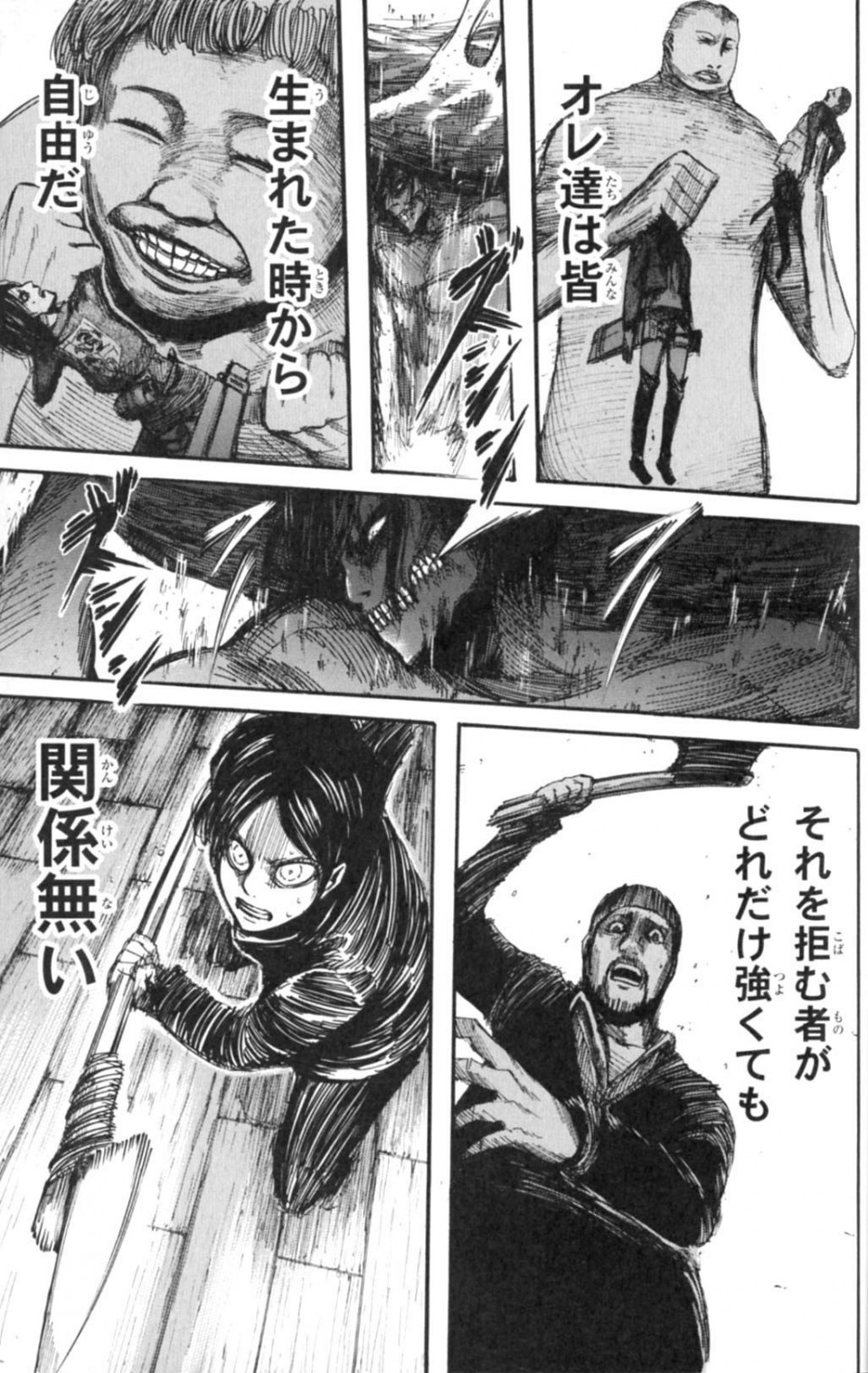 A scene from the fourth volume of manga series "Attack on Titan." (Copyright Hajime Isayama/Kodansha Ltd.)(Photo courtesy of Kodansha)(Kyodo)

The series addresses real-life themes, including ethnic discrimination, and readers are forced to ask non-judgmental questions, such as "whether the enemy is really an enemy" and "whether Eren is correct." They are left in suspense until the end.

Sugita says it is this sense of being "suspended in midair" that makes the story realistic.

The series "has resonated with an uneasiness hanging over modern society where information is overflowing and people have become distrustful, doubting justice and truth," he said.

"Attack on Titan" has attracted an overseas readership as well. In Hong Kong, Joshua Wong, 24, and Agnes Chow, 24, who led a series of pro-democracy sit-in street protests, dubbed the "Umbrella Movement," in 2014, profess to be devoted readers. 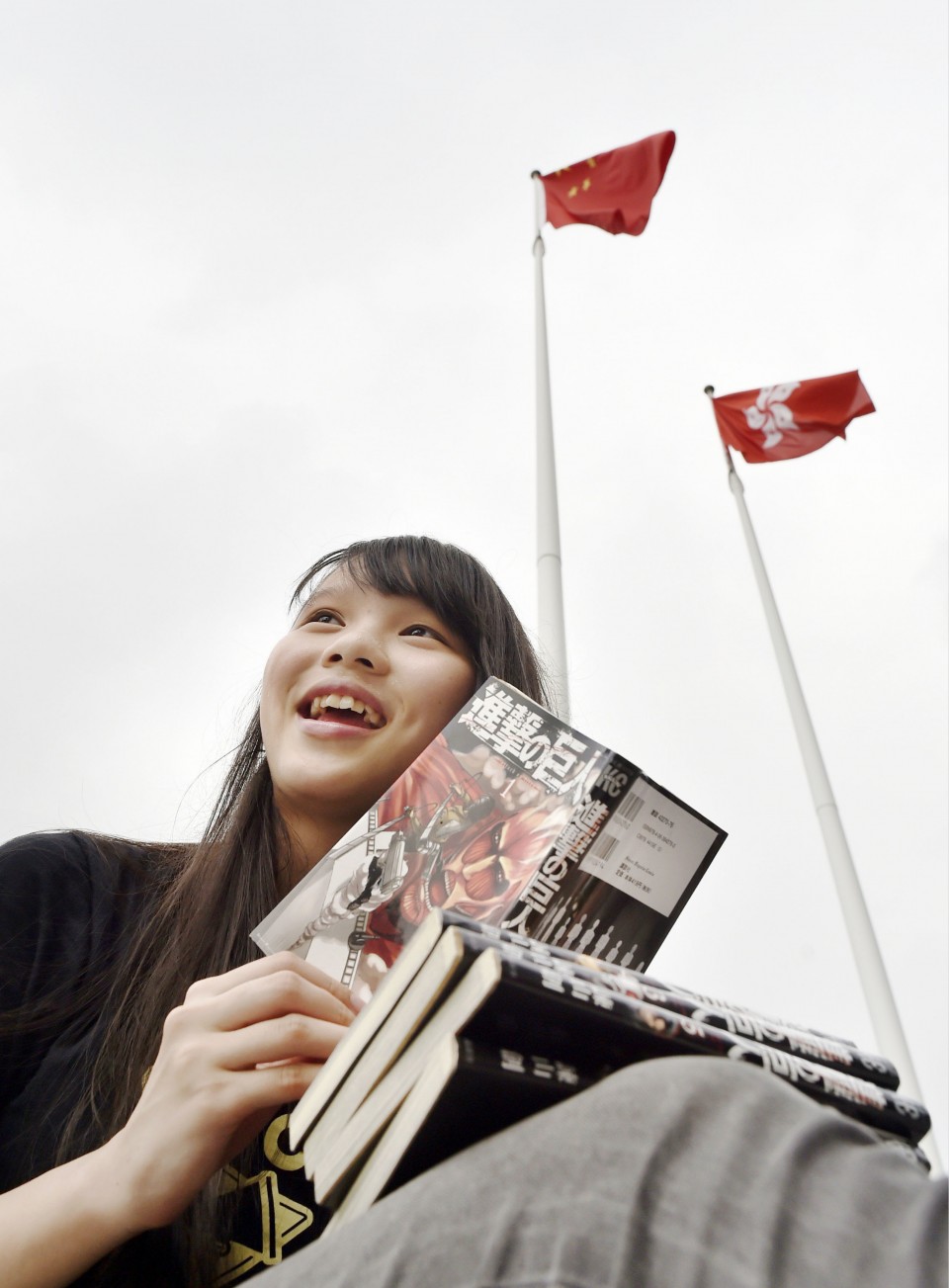 Agnes Chow, a student leader of the then-pro-democracy "Umbrella Movement" in Hong Kong in this photo taken in 2015, said at the time, "Attack on Titan also depicts internal conflicts between allies. It is also in actual organizations." (Kyodo)

Now in jail, Wong has reportedly told people close to him not to reveal the conclusion of the story as he wants to read it after leaving prison.

"Attack on Titan" has attracted many readers in Hong Kong because of the former British colony's unstable situation in the 2010s, said Cheung Yukman, 43, a Ritsumeikan University associate professor studying Japanese subcultures.

Hong Kong used to enjoy stability and prosperity, protected behind the wall of the "one country, two systems" principle. But the Titans, as a metaphor for mainland China, have "breached the wall and invaded Hong Kong," Cheung said.

The manga series stresses that sometimes, dialogue is useless to settle disputes and that acceptance of harsh reality is unavoidable. And in this depiction of the powerlessness of people in the face of great violence, one can superimpose the image of the citizens of Hong Kong oppressed by China.

"'Attack on Titan' represents revolts against the powerlessness of words and hypocrisy," Cheung, who hails from Hong Kong, said.

He sympathizes with Eren who plunges headlong toward destruction, remembering that pro-democracy protesters in Hong Kong in 2019 adopted a slogan of "If we burn, you burn with us." It was only by getting embroiled in the fight that the world sat up and took notice, Cheung said.

Having carved a place in the history of Japanese subculture as a strange and wonderful smash hit, the 34th and final volume, including the final chapter, is due to be released on June 9.