Japan's top government spokesman on Sunday referred to the possibility of extending a state of emergency over the novel coronavirus in Tokyo, Osaka and seven other prefectures beyond the May 31 expiration date.

The government "will discuss whether to scale down (the state of emergency) to quasi-emergency measures, or to bring (the nine prefectures) back to a normal state if a certain period of continuation of the (state of emergency) declaration significantly improves the situation," Chief Cabinet Secretary Katsunobu Kato said on an NHK program. 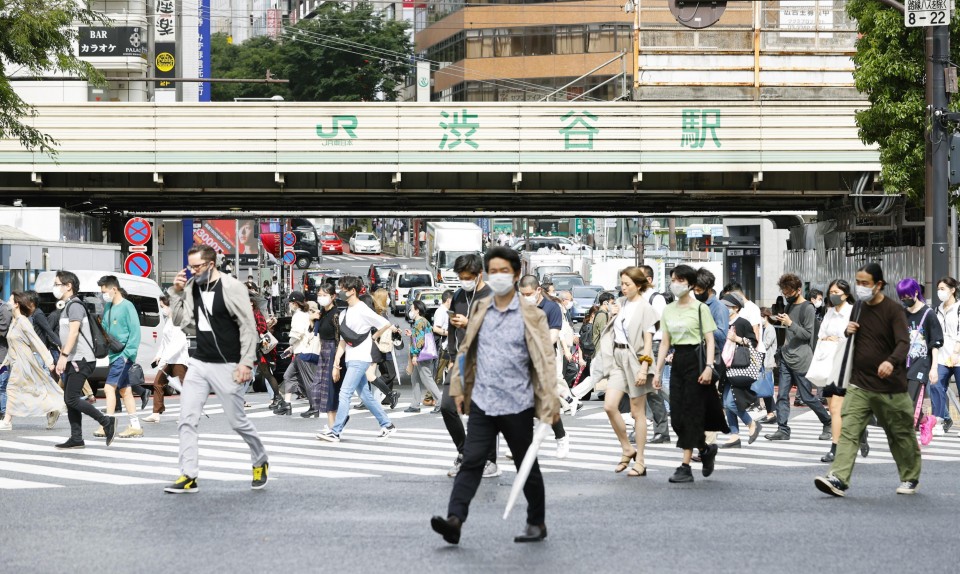 People wearing masks to protect against the novel coronavirus walk in Tokyo's Shibuya area on May 21, 2021. (Kyodo) ==Kyodo

In an effort to curb the COVID-19 pandemic, Prime Minister Yoshihide Suga has declared a state of emergency in the capital, Hokkaido and Aichi, Osaka, Kyoto, Hyogo, Okayama, Hiroshima and Fukuoka prefectures -- with eateries told to close by 8 p.m. and to refrain from serving alcohol or offering karaoke services.

On Sunday, the government also invoked a state of emergency in Okinawa Prefecture, with similar measures in place in the southernmost island prefecture through June 20.

Japan confirmed around 4,050 daily coronavirus cases, according to a tally based on local government reports, with Hokkaido marking 605, Tokyo 535 and Osaka 274. Okinawa logged an additional 156 infections after hitting a record 231 the previous day.

"Although the number of infected people has decreased from the previous week, it has not been controlled," Tokyo Gov. Yuriko Koike told reporters.

The number of patients suffering severe conditions rose to a record 1,304 across the country, the health ministry said.

Kato indicated that if extended, a new deadline for the nine prefectures could coincide with the June 20 expiration date for Okinawa.

"We are expected to see questions about setting different deadlines for each region, so we will consider them in groups," he said.

Kato said the government will take into account the level of infections, the occupancy rates of hospital beds for COVID-19 patients and the level of people's movements when making decisions about lifting the emergencies in the 10 prefectures.

Speaking in the same program, Keiichiro Kobayashi, a Keio University professor and a member of a government advisory panel on COVID-19 response, warned the government not to rush to end the emergency declarations.

"If the government hastily lifts the declarations, that would lead to a rebound (in the number of cases) and put a major brake on the economy," Kobayashi said, urging the prime minister to give careful consideration to the timing to avoid a resurgence in infections.