Japan's confirmed daily coronavirus infections topped 6,000 for the third straight day on Sunday, while the number of patients with severe symptoms rose to a record 1,144, amid the spread of more contagious variants.

The previous record for severely ill patients was 1,131 reported on Friday, when the government decided to extend the current state of emergency covering Tokyo and the greater Osaka area to May 31 and expand it to Aichi and Fukuoka prefectures. 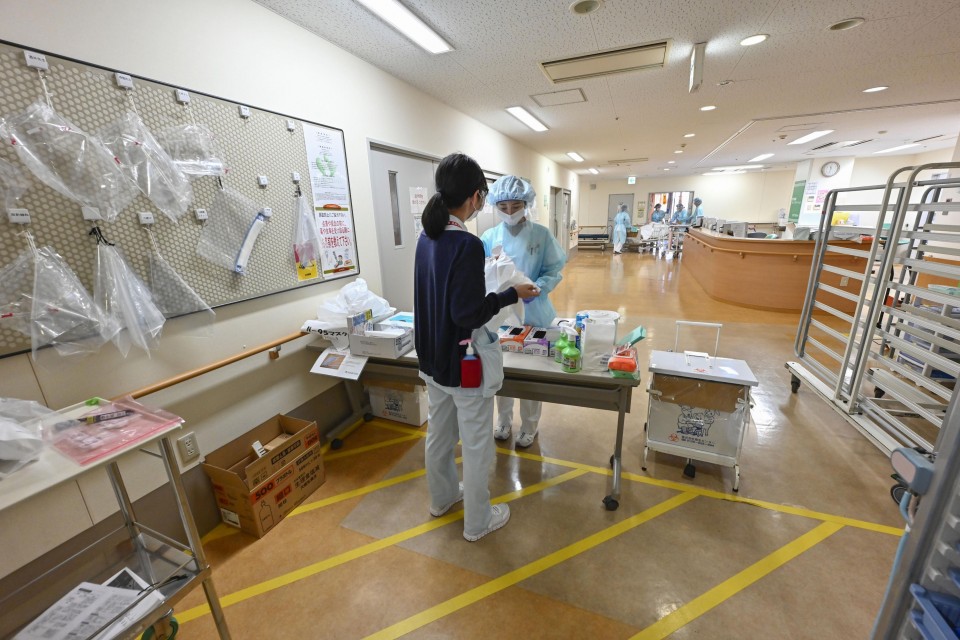 Nurses work in a ward earmarked for coronavirus patients at Kano General Hospital in Osaka on Feb. 4, 2021. (Kyodo) ==Kyodo

The country is now facing a fourth wave of infections, with daily coronavirus cases topping 7,000 on Saturday for the first time since mid-January and a record number of infections seen in 15 of its 47 prefectures.

On Sunday, the daily figure totaled 6,493. Tokyo reported 1,032 new cases, after confirming 1,121 the day before -- the highest daily level since Jan. 22 when the second state of emergency was still in place.

Tokyo Gov. Yuriko Koike told reporters that she wants to "effectively contain infections" during the extended period of the emergency.

Record numbers of infections were reported again in wide areas of the country, with the southwestern prefecture of Fukuoka seeing 529 cases and the northern main island of Hokkaido logging 506. More than 50 deaths were reported nationwide.

The figure for seriously ill patients marked an increase of 13 people from the day before, according to the Ministry of Health, Labor and Welfare.

With Japan's vaccine rollout lagging far behind other countries, the government plans to set up large-scale inoculation centers in Tokyo and Osaka to be staffed by Self-Defense Forces doctors and nurses.

An official said the government is planning to administer up to 5,000 shots a day at the center in Osaka Prefecture, where another 874 coronavirus infections were reported on Sunday.

The official, who declined to be named, also said the Tokyo center will be able to administer 10,000 shots a day from its opening on May 24.

Under the emergency, tougher measures have been taken since late April, such as asking dining establishments to stop serving alcohol, big shopping facilities to close and big events to be held without spectators.

On Friday, the government said some restrictions could be eased, including allowing department stores to open until 8 p.m. and organizers to stage concerts with a limited number of people. However, Koike and Osaka Gov. Hirofumi Yoshimura said they will continue to ask large commercial facilities to remain closed.