Myanmar is facing a shortage of cash and rising prices of goods and services under military rule, with people withdrawing their savings from banks out of concern for the future, on the one hand, and the junta limiting money supply to head off inflation, on the other.

Four months into military rule since a Feb. 1 coup that ousted the civilian government led by Aung San Suu Kyi, and with a weakening local currency, the junta has yet to rein in the economic woes precipitated by the power grab. 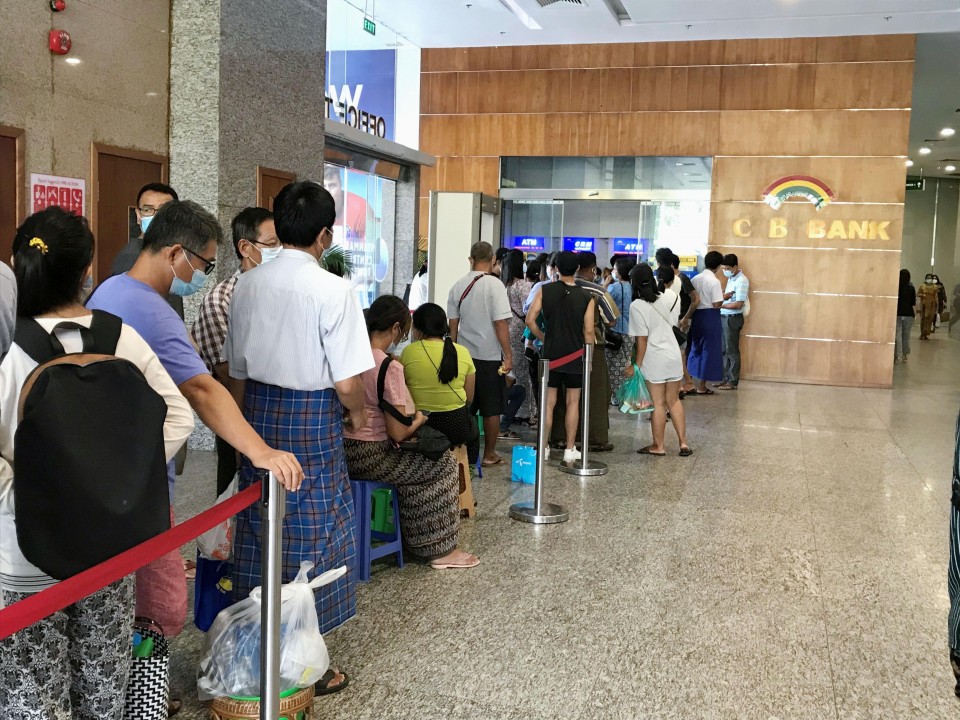 People line up in front of automated teller machines to withdraw money in Yangon on May 18, 2021, as prices are on the rise on the back of political unrest triggered by the February military coup in Myanmar. (Kyodo) ==Kyodo

In the country's largest city Yangon, must-carry items for those waiting in line for their turns at ATMs include a chair, water, breakfast, snacks and a handheld fan. People are also forming long lines outside banks every day before dawn, requiring hours at a time to get cash.

The country's financial institutions became paralyzed in the early days of military rule as bank employees and others refused to report to work as part of growing civil disobedience movements.

Financial institutions have since begun resuming operations gradually, but the junta has kept restrictions on the amount of withdrawals people can make, to prevent a run on banks.

Those who managed to withdraw money from their bank accounts have converted it into U.S. dollars on the black market, or kept it under their mattresses, according to a financial industry source.

A lack of cash has cast long shadows over corporate activities. A source at a Japanese garment company complained that it is having a hard time paying its workers due to a lack of cash at hand.

The shortage of cash has also made it difficult for the military to pay soldiers on time, driving some of them into looting, according to local media.

While the junta can direct the country's central bank to print more money to increase money supply, it is reluctant to take that route as there is a precedent in Myanmar in which rising prices of goods triggered large-scale anti-government demonstrations, a diplomatic source said.

There is also speculation that the country's money supply has been hit as a German company that had supplied the government with banknote materials stopping doing so in the wake of the coup.

The prices of gasoline and other types of fuel as well as medicines, which are all reliant on imports, have gone up.

Taking into account the aftereffects of disruptions to logistics following the coup, Hiromasa Matsuura, chief economist at Mizuho Research & Technologies Ltd., said the prices of goods in Myanmar may have risen more than 10-15 percent overall.

It also has not helped that Myanmar's currency, the kyat, has lost 20 percent of its value against the dollar since the coup.

A group formed by economists in the country's public and private sectors who oppose military rule has noted that the Myanmar economy has already shown signs of inflation due to a lack of goods and currency depreciation.