Malaysia's average daily COVID-19 cases per capita exceeded India this week and the country's health care system has been on the verge of collapsing, leading the government to announce a total nationwide lockdown on Friday.

"The decision was taken after considering the current COVID-19 situation where daily COVID-19 cases have reached over 8,000 with more than 70,000 active cases. Up until today, 2,552 people had died," Prime Minister Muhyiddin Yassin said in a statement. 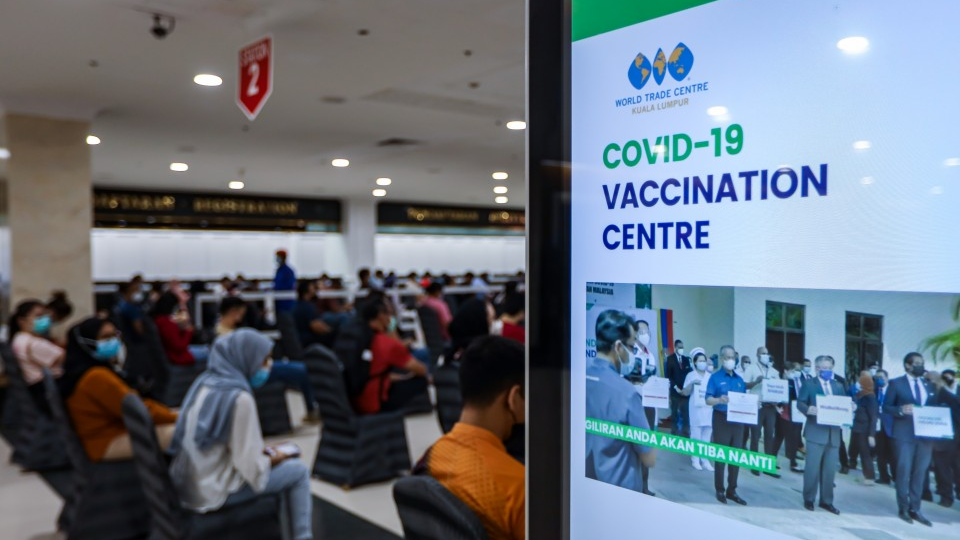 People wait to receive AstraZeneca COVID-19 vaccine at a vaccination centre on May 21, 2021 in Kuala Lumpur, Malaysia. (Getty/Kyodo)

Malaysia's coronavirus outbreak has surpassed India on a key benchmark since Sunday. It reported 211.29 daily new cases per million people on Wednesday on a rolling seven-day average, compared with 165.28 in India, according to Johns Hopkins University data.

Daily COVID-19 cases crossed the 7,000 mark on Tuesday and the 8,000 mark on Friday, the highest since the outbreak.

Not only is the infection rate going up but also the fatality rate. Death cases are consistently by the "busload," as the Health Ministry described it, notching between 40 and over 50 a day.

In hospitals in Selangor and Penang states, ICUs are already full and some have had to repurpose normal wards. In Penang, the military was roped in to construct a "field ICU" in a hospital compound.

As the mortality climbs, two hospitals in Selangor resorted to using shipping containers as makeshift morgues.

"The country's health care is on the verge of collapse and our hope lies with the frontliners. Help us by staying at home," Hisham said in a Facebook post Friday.

Under the total lockdown from June 1 to 14, all social and economic sectors will be shut, except for essential sectors and services.

Malaysia has been grappling with the third wave of the coronavirus outbreak since last September that was sparked by a state election in Sabah in Borneo that month.

Social distancing and mask rules flew out the window in campaign rallies, and politicians and voters who flew from Peninsular Malaysia to Sabah to campaign and vote, returned and spread the virus.

In January, a state of emergency was declared, with inter-state travel banned and schools shut. Schools were allowed to reopen in March, only to close again this month.

Meanwhile, large swathes of the economy continued to run as normal.

The government announced further tightening of the order on May 12, banning inter-district travel, cutting operating hours of businesses and pushing companies to comply with the work-from-home policy, among other measures.

According to the Health Ministry, out of the current 593 active clusters detected up to Wednesday, 39 percent were from the workplace involving nearly 17,000 active cases, or a quarter of the total active cases.

The government had said a total lockdown would hurt the economy, noting that the first time the country went into a full lockdown in March last year, the country lost billions of ringgit a day and many lost their jobs during the nearly two months under it.

The Finance Ministry forecast this week before the prime minister's announcement that the Malaysian economy would grow between 6.0 and 7.5 percent this year.

The worst may not be over yet, as Hisham warned. Daily cases continue to hit record highs, and 80 percent of the cases detected were unlinked, the health official said early this month.

Malaysia has also been hit with the more infectious and severe coronavirus variants. As of Tuesday, the Health Ministry had reported 78 cases of the South African variant and six of the Indian variant.

"The rise of cases started from April 1 and could trigger a vertical surge. We need to prepare for the worst. Please help us to stay at home. Only together we can break the chain of infection," Hisham said in a Twitter post on Wednesday.