A total of 59.7 percent of people in Japan believe the Tokyo Olympics and Paralympics this summer should be canceled, a Kyodo News poll showed Sunday, as infections in the country continue to surge and vaccine rollout remains slow less than three months before the games.

The two-day nationwide telephone survey conducted from Saturday also found that 25.2 percent said the games must be held without spectators, while 12.6 percent favor holding the global sporting event with a limited number of spectators. 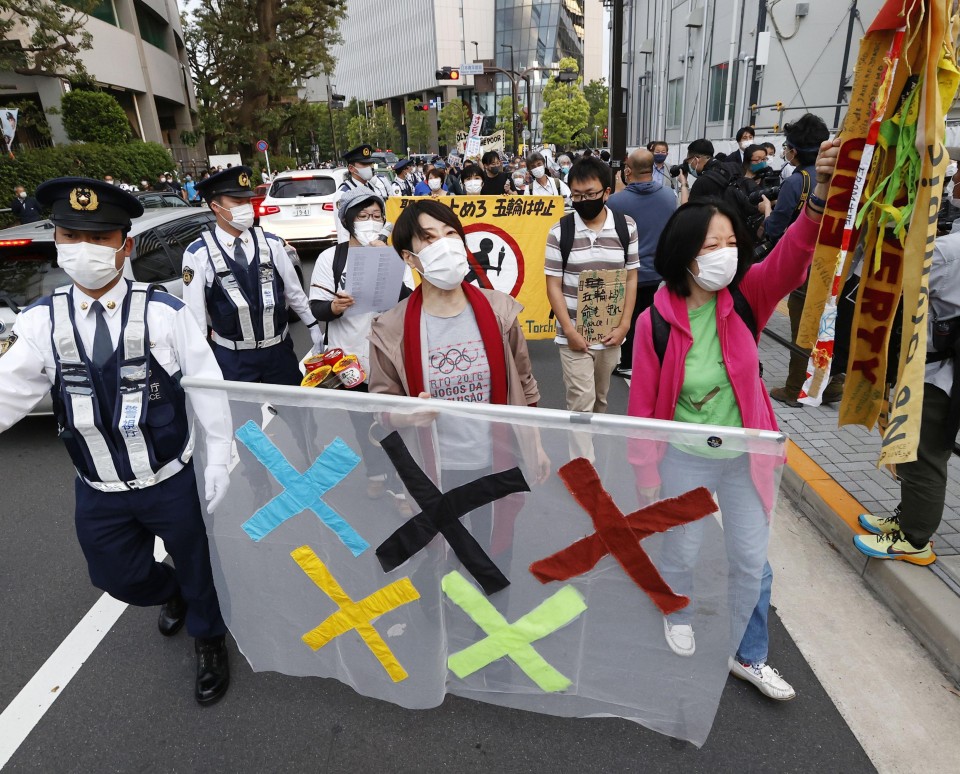 People protest around National Stadium in Tokyo on May 9, 2021, against holding the Tokyo Olympics amid the coronavirus pandemic. (Kyodo)

The results reflect growing skepticism over holding the games, which had already been postponed by one year due to the coronavirus pandemic, as the country is facing a fourth wave of infections that involves more contagious variants.

Although the Olympic organizers have already decided there will be no overseas spectators so as to prevent the spread of the virus, the survey showed 87.7 percent are concerned that an influx of athletes and staff members from abroad may spread the virus.

The Tokyo Olympics is scheduled to open on July 23, while the Paralympics is slated to begin on Aug. 24. Tokyo is among nine prefectures currently under a COVID-19 state of emergency which will last until May 31.

The results concerning the question on holding the Olympics do not have comparable data from previous Kyodo News polls as the latest one did not ask whether the games should be rescheduled.

In a survey in April, 39.2 percent believed the event should be canceled, while 32.8 percent thought they should be rescheduled, with only 24.5 percent saying the games should be held as scheduled.

COVID-19 cases have been growing nationwide in recent weeks, putting further strains on the country's medical system. More patients are dying at home due to the difficulty of finding available hospital beds, with the situation worsened by the spread of the new variants and the slow process of inoculation.

In the poll, 85.0 percent said they think Japan's coronavirus vaccine rollout has been slow, and 71.5 percent were dissatisfied with the government's handling of the pandemic, a record high since the outbreak that started when Prime Minister Yoshihide Suga's predecessor Shinzo Abe was in power.

Amid mounting dissatisfaction with the government's anti-virus response, the disapproval rating for Suga's Cabinet hit the highest level since its launch in September at 47.3 percent, up from 36.1 percent in the previous survey in April. The approval rating dropped to 41.1 percent from 44.0 percent.

The government is trying to speed up the pace of its inoculation campaign, but it has administered at least one shot to just around 3 percent of the country's entire population of 126 million, lagging far behind the world average at roughly 9 percent, according to a University of Oxford tally.

Asked whether Japanese Olympics and Paralympics athletes should be given priority in being vaccinated, 53.9 percent of respondents said the athletes should be, while 13.1 percent said otherwise and 32.7 percent replied they cannot give a clear response.

With the new variants mostly replacing previous strains without mutations across the country, 90.3 percent of the respondents feel anxious about the trend.

The latest survey was released on the day when tougher measures against the resurging infections commenced in six prefectures in the country, with Hokkaido, Okayama and Hiroshima coming under an expanded state of emergency as well as Gunma, Ishikawa and Kumamoto covered by a quasi-emergency.