The Japanese government and plaintiffs in lawsuits over damages caused by asbestos agreed Tuesday on a settlement after the Supreme Court held the state liable for lung cancer and other illnesses contracted by construction workers exposed to the material.

The plaintiffs signed an agreement with health minister Norihisa Tamura after Prime Minister Yoshihide Suga offered an apology in a meeting with them and their lawyers in four suits on which the top court ruled the previous day.

The ruling said the state was negligent in its duty to protect construction workers from contracting the diseases. The government will pay compensation ranging from 5.5 million yen ($50,000) to 13 million yen to each victim exposed to asbestos, according to the accord. 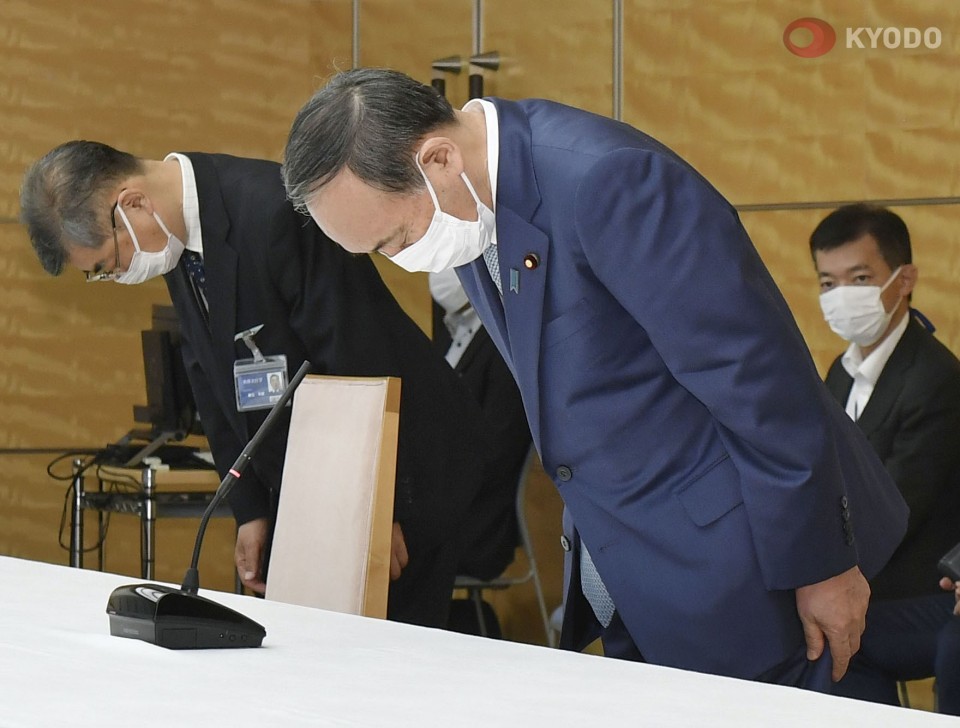 Japanese Prime Minister Yoshihide Suga (R, front row) apologizes to plaintiffs in Tokyo on May 18, 2021, a day after the Supreme Court ruled in favor of them in four suits seeking damages from the state over diseases contracted by construction workers following exposure to asbestos. (Kyodo) ==Kyodo

On top of the compensation, the government will pay a total of 3 billion yen to the plaintiffs to make up for the lengthy court proceedings. The agreement also creates a system to provide the same level of compensation to victims who have not filed lawsuits.

Upon signing the accord in the evening, Tamura told the plaintiffs, "I would like to offer my heartfelt apology to the victims and their family members who have suffered so much over the years."

In the morning meeting, Suga said, "It is impossible to imagine the extensive burden and the suffering of those who sustained damage to their health and those who lost their loved ones, and I am at a loss for words."

Kazuo Miyajima, a 91-year-old lead plaintiff in a Tokyo suit, said at a press conference after signing the accord that he felt "exhilarated" at the agreement but regretted that 13 years have passed since the first damages suit over asbestos was filed in Japan.

"If the cases were settled in three years, the number of plaintiffs who died during the court procedures would have been fewer," Miyajima said.

Wakae Yoshitsune, 73, who headed plaintiffs in a Kyoto suit, said at the same press conference, "We've finally seen the light after all the efforts. I'd like to share the joy with everyone."

On Monday, the top court ruled in favor of around 500 plaintiffs in the four suits and said the state should have warned of the dangers of asbestos by October 1975 through labels on construction materials or at construction sites and should have instructed workers to wear protective masks.

Asbestos was widely used for insulation, fire protection and sound absorption in buildings, although its use was gradually regulated after it was found that inhaling asbestos could cause lung cancer and other diseases.

A number of similar suits have been filed since 2008, with a total of 1,200 plaintiffs as of April, according to the lawyers involved. The plaintiffs include bereaved family members of workers.

The four suits were examined by the top court after high court rulings differed in assigning responsibility to the state and manufacturers.