The Group of Seven countries on Wednesday stepped up pressure on China during their three-day foreign ministerial talks in London, urging Beijing to address concerns over its alleged human rights abuses and tensions in the Taiwan Strait.

Calling China a "major power and economy with advanced technological capability," the G-7 foreign ministers called on Beijing in their communique to "assume and fulfil obligations and responsibilities commensurate with its global economic role."

"We will work collectively to foster global economic resilience in the face of arbitrary, coercive economic policies and practices," the ministers said while pledging to "work with China to promote regional and global peace, security and prosperity." 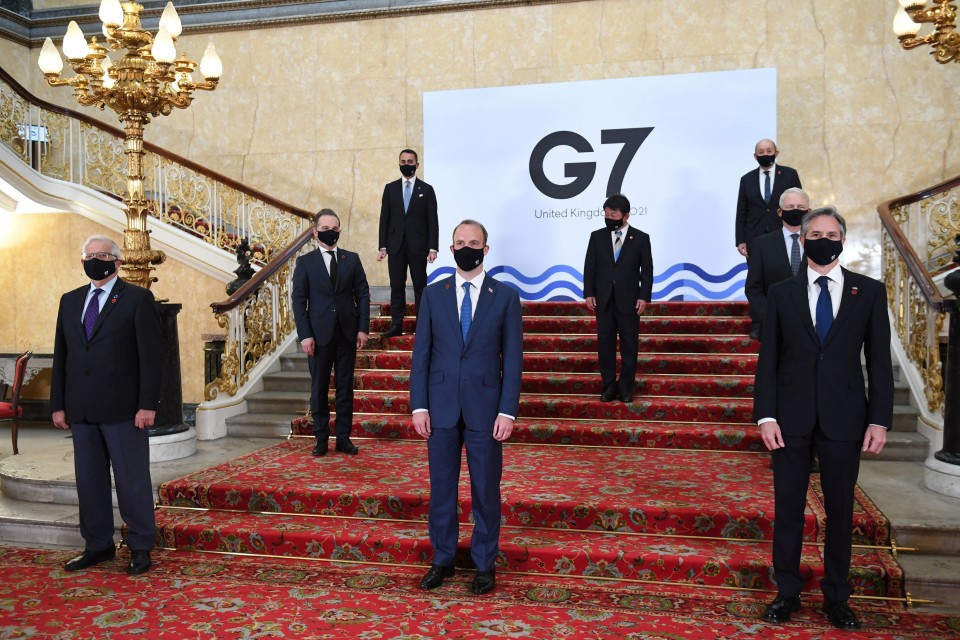 Group of Seven foreign ministers wear face masks and are socially distanced for a group photo on the stairs at Lancaster House in London ahead of bilateral talks at the G7 Foreign and Development Ministers meeting in London on May 4, 2021. (Pool/Getty/Kyodo)

As China increases its military pressure on Taiwan, the ministers of the major economies including the United States, Japan and Britain, which holds the G-7's rotating presidency this year, stressed the importance of "peace and stability across the Taiwan Strait," opposing unilateral actions to escalate tensions through militarization, coercion and intimidation.

This marks the first time G-7 leaders or foreign ministers have made any reference to issues surrounding Taiwan since 2006, according to Japanese officials.

The ministers also expressed support for Taiwan's "meaningful" participation in World Health Organization forums and the meeting of the WHO's decision-making body, particularly when the world is expanding efforts to rein in the coronavirus pandemic.

China opposes Taiwan's participation in international forums as Beijing regards the self-ruled, democratic island as a renegade province to be reunited with the mainland, by force if necessary.

Whether the "Taiwan region of China" should join international organizations including the WHO "must be handled in accordance with the one-China principle," Chinese Foreign Ministry spokesman Wang Wenbin told reporters in Beijing on Thursday.

China's alleged crackdowns on the Muslim Uyghur minority in the Xinjiang autonomous region were mentioned as an issue warranting deep concern among the G-7 ministers gathering, held for the first time since the launch in January of the administration of U.S. President Joe Biden, which calls for multilateralism to make a shift away from his predecessor Donald Trump's "America First" style.

"We agree the importance of tackling instances of forced labor through our own available domestic means, including through raising awareness and providing advice and support for our business communities," the communique said.

The ministers also expressed concerns over China's move to erode democratic elements of the electoral system in Hong Kong, as well as the situation in the East and South China seas where Beijing has been stepping up territorial claims including over the Japanese-controlled Senkaku Islands.

Wang said the G-7 countries "have made unfounded accusations against China, openly intervened in China's internal affairs and engaged in group politics that reverses history."

"This is a gross interference in China's sovereignty" and "a violation of the norms of international relations," he added.

In reflection of the G-7's commitment to realizing a free and open Indo-Pacific to counter China's rise, representatives from Australia, India, South Korea, South Africa and Brunei, which chairs the Association of Southeast Asian Nations this year, were invited to part of the discussions as guests.

The communique also called on North Korea to refrain from provocative actions and to engage in a diplomatic process toward the goal of "complete, verifiable and irreversible abandonment" of its nuclear and missile programs.

Voicing regret that North Korea has not taken "concrete, verified" actions toward denuclearization, the G-7 ministers said it is "critical" that sanctions which target Pyongyang remain in place while its nuclear and ballistic missile programs exist.

To address global challenges such as the pandemic, the G-7 ministers said in a separate statement that they commit to working with industry to "facilitate expanded manufacturing at scale of affordable COVID-19 vaccines, therapeutics and diagnostics."

The group of leading democracies also including Canada, France, Germany and Italy plus the European Union discussed other regional issues such as the military coup and the crackdowns on peaceful protestors in Myanmar, Iran's nuclear and missile development and Russia's attempts to undermine Ukraine's territorial integrity.

On Myanmar, the G-7 ministers said they "condemn in the strongest terms" the coup and they demanded the Southeast Asian country's military and police cease the violence and immediately release State Counsellor Aung San Suu Kyi and all of those detained and restore power to the democratically-elected government.

On Russia, the foreign ministers were "deeply concerned" about its continued "irresponsible and destabilizing behavior," raising alarm against the large buildup of Russian military forces on the Ukrainian border and in annexed Crimea.

The meeting marked the first face-to-face G-7 meeting in two years due to the spread of the new coronavirus.

The London meeting lays the groundwork for a G-7 summit slated for June 11-13 in Cornwall, southwestern England.

In a teleconference in February, the G-7 leaders vowed to make 2021 a turning point for promoting multilateralism, in contrast to Trump's "America First" approach.