A 42-year-old mayor in eastern Japan came under scrutiny Thursday as he was inoculated against COVID-19 ahead of the elderly, in the latest case that could raise suspicion about fair distribution amid the country's sluggish vaccine rollout.

Shirosato Mayor Osamu Katono in Ibaraki Prefecture told a press conference he received his first dose on April 28 along with other town officials, justifying the move by explaining there had been canceled appointments that day by health care workers, and the doses would have gone to waste. 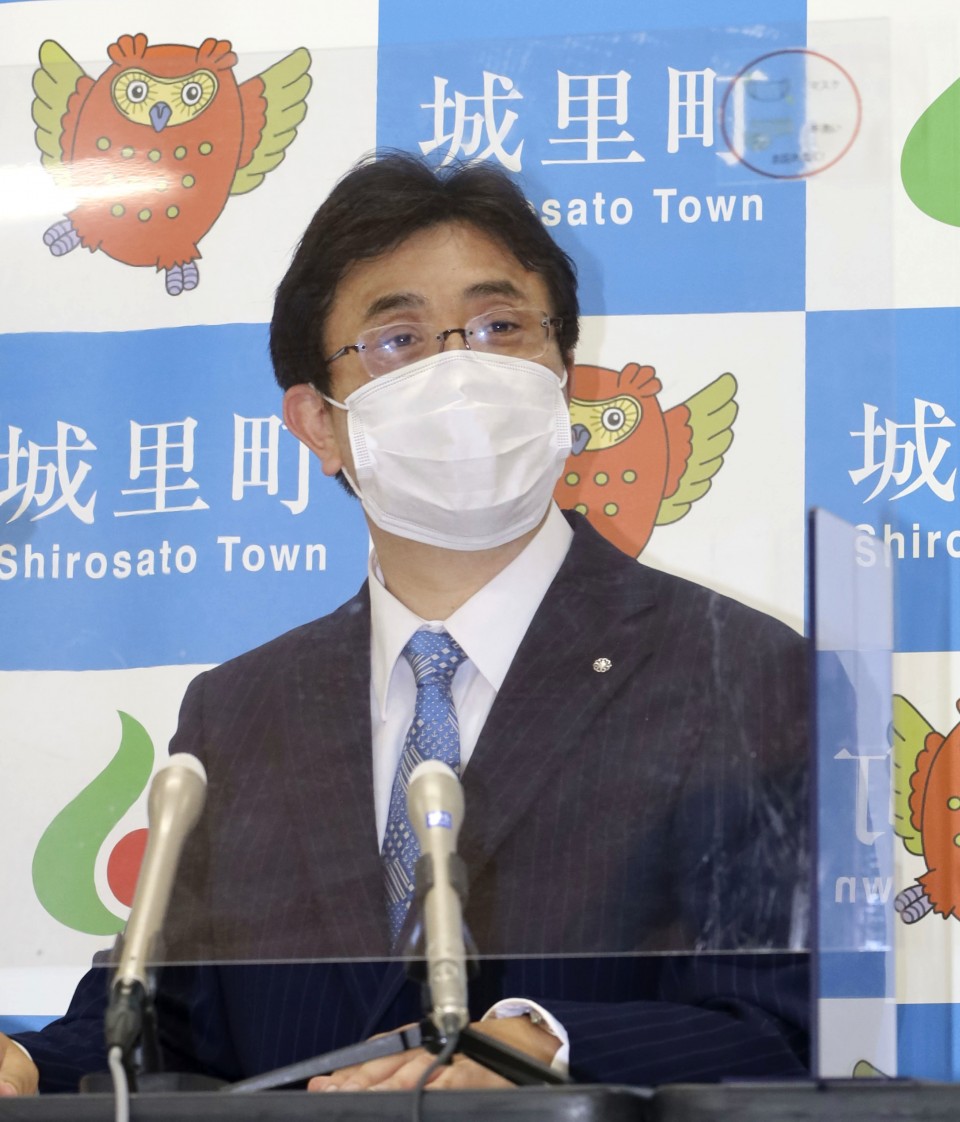 Shirosato Mayor Osamu Katono holds a press conference at the town hall on May 13, 2021. (Kyodo)

Katono also said he is "equivalent" to a health care worker because he oversees the vaccination site located next to the town hall. "If the mayor, the one who gives the orders, gets infected, it would cause confusion. I don't see a problem with it," he said.

Japan last month began inoculating people aged 65 or older, following the vaccine rollout for health care workers in February. The mayor's move could draw backlash as many seniors have been unable to secure bookings by phone or online due to the slow vaccination progress.

Deputy Mayor Fujio Nakata, 65, and the head of the town's education board, Hideo Takaoka, 65, also received their first doses of Pfizer Inc.'s vaccine together with the mayor. Katono plans to get his second shot later this month.

Nakata later told reporters he is "sorry" because health care workers and senior citizens should have been given a priority.

Their case followed that of Sogo Yamana, the 62-year-old mayor of Kamikawa in western Japan's Hyogo Prefecture, inoculated May 6 with a dose that would have gone unused due to a cancellation. He said Wednesday he received the jab for the sake of the town's "crisis management."

On Tuesday, the deputy mayor of Nishio in Aichi Prefecture, central Japan, apologized after giving priority reservations for COVID-19 vaccinations to the 70-year-old head of a major pharmacy chain and his 67-year-old wife.

The government's top spokesman, Chief Cabinet Secretary Katsunobu Kato, told a press conference Thursday any actions lacking fairness would be "truly regrettable" and that administrators should refrain from actions that undermine the public trust.

Japan's vaccination program has lagged behind other countries, including Israel, Britain and the United States, with only around 3 percent of its population having taken at least one dose with less than three months until the Tokyo Olympics.

While only the Pfizer vaccine has been approved for use on people aged 16 and older so far, the administration of Prime Minister Yoshihide Suga hopes adding Moderna Inc.'s version, possibly later this month, will speed up the process.

Japan received its second shipment of the Moderna vaccine on Thursday, the U.S. biotechnology firm's partner Takeda Pharmaceutical Co. said. It is part of a supply agreement for 50 million doses by the end of September.

Meanwhile, Taro Kono, the minister in charge of the government's vaccine rollout, called on Keidanren, the country's powerful business lobby, to cooperate in inoculating workers and their elderly family members by setting up vaccination sites within companies and making it easier to take days off.