At least 10 Japanese companies have had direct business ties with firms affiliated with Myanmar's military or have taken part in projects that could be sources of income for the junta, a Kyodo News investigative team found recently.

The results of the probe were released Saturday amid concerns that funding and business deals by Japanese state-run and private entities may be aiding human rights abuses by Myanmar's military government, while calls are growing in the United States and European countries, as well as from shareholders, to sever ties with the junta. 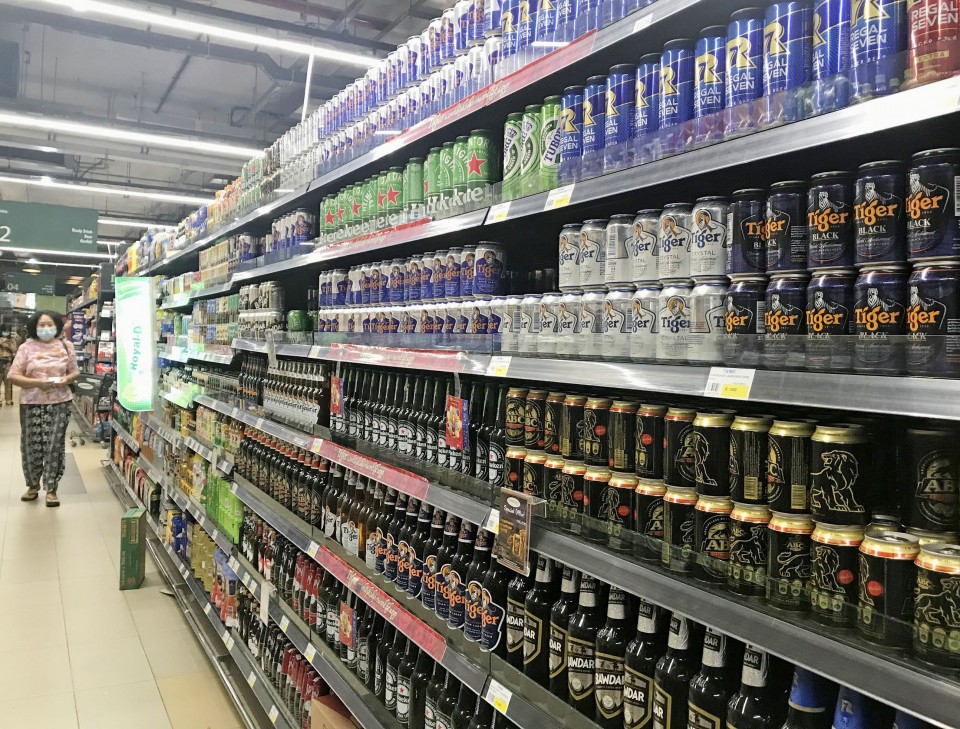 Photo taken in February 2021 shows beer shelves at a supermarket store in Yangon, where products from military-affiliated companies have been removed. (Kyodo)

About 400 Japanese companies entered Myanmar after the 2011 transition to a civilian government following decades of military rule.

Since then, Japan's official development assistance resumed but companies are still required to partner with local firms due to restrictions on foreign investment, and several of them partnered with those related with the military.

One instance involves Kirin Holdings Co., which has two joint ventures -- Myanmar Brewery Ltd. and Mandalay Brewery Ltd. -- with Myanma Economic Holdings, identified by the United Nations as being owned by senior members of the military.

After concerns were raised about the partner's financial and governance structures, Kirin carried out a review and stopped dividend payments from the ventures. However, the partnership has yet to be dissolved as negotiations continue to face challenges.

In a separate case, over 200 million yen ($1.84 million) in ground rent was paid annually to Myanmar's Defense Ministry for a redevelopment project in Yangon by a Japanese consortium through a local joint venture.

With the ministry and military effectively unified, the funds for the project, which was financed by the Japan Bank for International Cooperation, as well as Mizuho Bank and Sumitomo Mitsui Banking Corp., could have been used for military activities.

Their involvement in the redevelopment project, to be constructed on the former site of a military museum at an estimated cost of 37 billion yen, has been under scrutiny since it was announced in 2017, when the military's persecution of the ethnic minority Rohingya had already been globally criticized.

Although the rent for 2020 has been paid, funds for 2021 onward are currently "under consideration," according to sources familiar with the matter.

Fujita said it was aware that the Myanmar government was the final beneficiary, while Mizuho and Sumitomo Mitsui declined to comment.

While admitting to subcontracting a military-affiliated firm, Yokogawa Bridge said it will "respect human rights."

Food machinery manufacturer Satake Corp. was also found to be working with a company in Myanmar with ties to the junta. When approached about their links, the firm said it will keep a "close watch on the situation."

Japanese jewelry company Tasaki & Co. had been providing the military with a share of its output upon receiving permission from the U.S.-sanctioned Myanmar Pearl Enterprise to cultivate pearls. The jewelry company said it will respond accordingly.

Since the military ousted an elected government led by leader Aung San Suu Kyi in a coup on Feb. 1, Myanmar has seen a wave of anti-coup protests, with security forces using deadly force to quell them and killing hundreds of civilians.

The probe targeted Japanese companies listed by the United Nations and international human rights organizations as having ties to the Myanmar military.