SoftBank Group Corp. said Wednesday its net profit in the business year ended March surged to 4.99 trillion yen ($46 billion), the highest level on record for a Japanese company, thanks to its successful investments in tech firms around the world.

Rebounding from a record net loss of 961.58 billion yen in fiscal 2019, SoftBank Group broke the previous record of 2.49 trillion yen in net profit logged by Toyota Motor Corp in fiscal 2017, according to data provided by Nomura Securities Co.

The Japanese investment giant made a dramatic turnaround from its loss a year earlier resulting from its failed investment in We Co., operator of U.S. shared workplace provider We Work.

SoftBank Group, however, remains vulnerable to changes in global stock markets as its businesses continue to focus on investments in tech firms.

Chairman and CEO Masayoshi Son said the company marked the record profit "by a series of chances," citing the robust recovery of global stock markets despite the novel coronavirus pandemic, a development that buoyed the stock valuation of the tech companies in which it has invested. 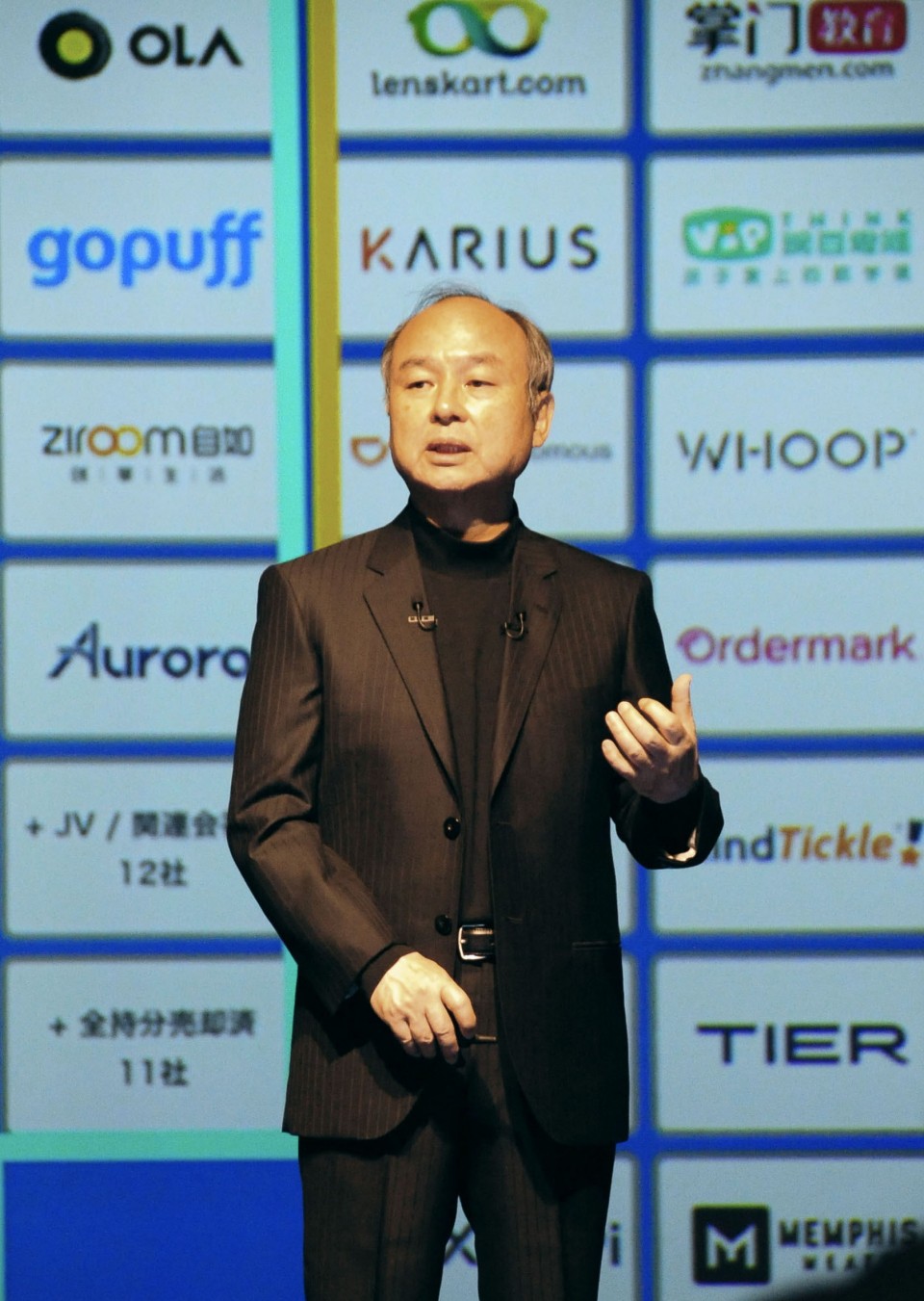 SoftBank Group Corp. Chairman and CEO Masayoshi Son speaks during a press conference in Tokyo on May 12, 2021. (Kyodo)

"We will continuously earn a profit, unaffected by ups and downs in stock markets, based on a new business model using artificial intelligence technology," Son told a press conference.

The surge in net profit was boosted by initial public offerings of some tech firms in which SoftBank Group has invested, including South Korean online retailer Coupang Inc. and U.S. food delivery service operator DoorDash Inc.

SoftBank Group said its investments in fiscal 2020 earned a profit of 7.53 trillion yen.

The company's investment funds, such as the nearly $100 billion Vision Fund, logged a profit of 6.29 trillion yen due to the higher valuation of its stock holdings, including U.S. ride-hailing service operator Uber Technologies Inc.

The company said its Vision Fund 1 and Vision Fund 2 invested globally in 125 companies in total, with 14 of them having gone public by the end of March.

Son said the company will keep investing in tech firms using its own war chest of 5.6 trillion yen derived in part from selling a large stake in T-Mobile U.S. Inc. and a 5 percent stake in its subsidiary wireless carrier SoftBank Corp. in the first half of fiscal 2020.

"We will produce listed companies every year like a manufacturer. The AI revolution has just started," Son added.

Akihisa Motonishi, chief analyst at Japan Credit Rating Agency Ltd., said the value of SoftBank Group is no longer assessed by its net profit, but by the asset value of its holdings.

"SoftBank Group is now able to effectively control the balance between investment and debt," he said, citing how the Japanese investment giant launched its asset-selling program worth 4.5 trillion yen in the first quarter amid volatile global stock markets due to the pandemic.

"SoftBank Group showed its ability to swiftly respond to a crisis and keep itself healthy even though it faced high volatility in stock markets," Motonishi said.

SoftBank Group did not provide earnings on an operating basis or a full-year outlook for fiscal 2021.