Shinkansen driver leaves cockpit for toilet while running at 150kph

A driver of a Shinkansen bullet train left the cockpit to use the bathroom while the train was running at 150 kilometers per hour with some 160 passengers on board in central Japan, Central Japan Railway Co. said Thursday.

The 36-year-old driver was out of the Hikari No. 633 train's cockpit for around three minutes after asking a conductor to take his place during his absence at around 8:15 a.m. on Sunday, with the train traveling between Atami station and Mishima station in Shizuoka Prefecture, said the operator known as JR Central.

The conductor, also 36, was not licensed to drive the bullet train.

According to the company, which operates the Tokaido Shinkansen Line connecting Tokyo and Shin-Osaka, it is the first instance of a driver on its bullet-train line vacating the cockpit while running with passengers on board, though a similar case occurred in 2001 with a driver who was moving an out-of-service bullet train.

JR Central reported the incident to the Ministry of Land, Infrastructure, Transport and Tourism, saying it was a violation of the ministry's ordinance.

Following the report, Masahiro Hayatsu, a senior official of JR Central, told a press conference, "It was an extremely inappropriate act. We apologize."

The company is considering taking punitive measures against the driver and conductor.

A transport ministry official also said it is "regrettable that government rules were not fully observed" and "safety is the priority as (the bullet train) carries peoples' lives." 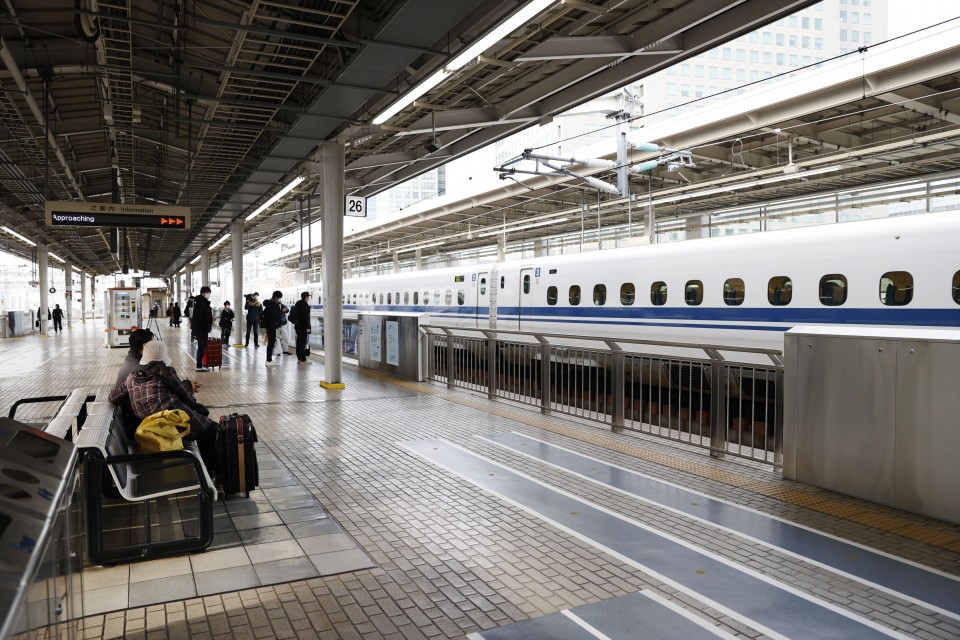 A platform for shinkansen bullet trains is nearly empty at JR Shin-Osaka Station in Osaka, western Japan, on Jan. 3, 2021, amid the coronavirus pandemic. In ordinary years, train stations are crowded on Jan. 3 as many people return from holidays. (Kyodo) ==Kyodo

Japanese bullet trains can run while gradually slowing down in the absence of a driver, and automatically stop in an emergency.

The Tokaido Shinkansen Line, Japan's busiest bullet train line, is an exclusive route for high-speed trains, without any commuter or conventional trains sharing the same track. Trains on the line travel with a top speed of up to 285 kph, according to the official website of JR Central.

According to the company, the driver felt abdominal pain. The conductor sat on a jump seat in the cockpit during the driver's absence without operating the train.

Under JR Central rules, a driver who experiences a health problem while operating a bullet train is supposed to report the matter to the operations center and either turn over the controls to a conductor licensed to drive or else stop the train at the nearest station.

The violation came to light after the company noticed a delay on the route, with the express train bound for Shin-Osaka passing by the Mishima station about one minute behind schedule.

In a hearing on the matter, the driver initially told the company he did not recall what happened due to his abdominal pain. However, an image of the cockpit confirmed his absence.

"I wanted to avoid delaying the train by stopping it (at the nearest station)," he was quoted by the company as saying.

Japanese trains, including bullet trains, are known for punctual operations, with delays of even a few minutes becoming a big issue for operators and a target of media scrutiny.