Up to around 300 people every day, who had pledged to self-isolate upon arrival into Japan as part of measures to contain the novel coronavirus, could not be confirmed to be in their quarantine location or were found to be some distance away, the health ministry and a contracted medical service firm said Saturday.

The daily checkups have been conducted as part of strengthened border control measures since the end of March to keep imported cases of the coronavirus at bay and target all arrivals into the country for a 14-day period. 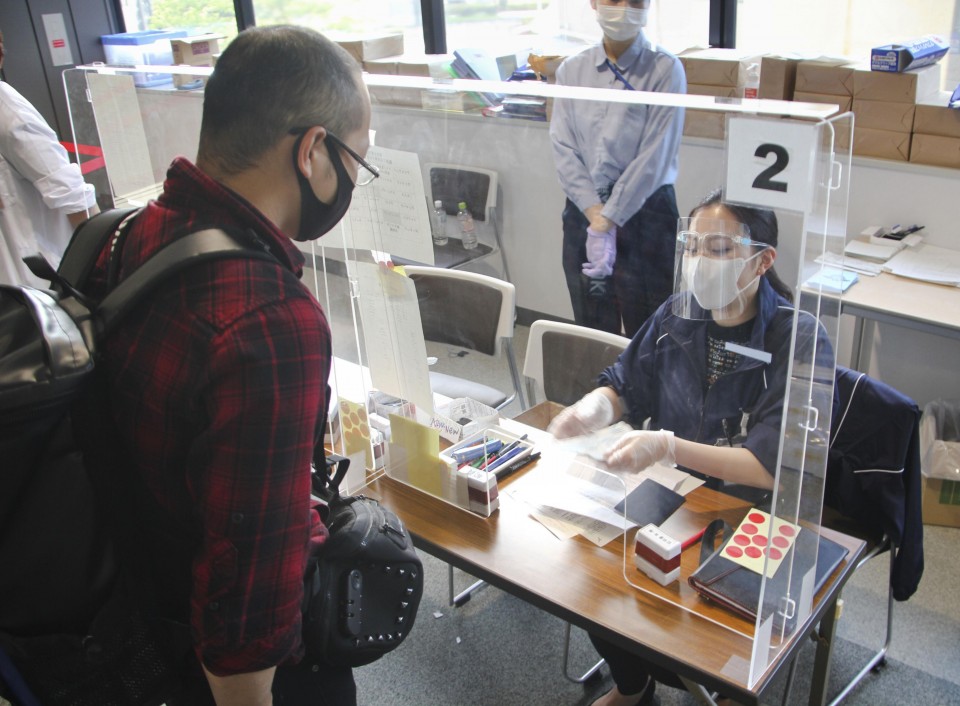 A passenger from overseas (L) has his coronavirus test certificate checked at Narita airport in Chiba Prefecture on April 19, 2021. (Kyodo)

But with the whereabouts of some people unable to be confirmed during the period, the ministry is now considering having private security companies pay visits to quarantine locations if the person cannot be reached for more than three days.

According to the ministry and the medical service company supporting the quarantine operation, an average of 24,000 people needed to be accounted for on a daily basis during a 14-day self-quarantine period.

Of that number, around 200 to 300 people every day could not be confirmed to be in their pledged quarantine locations, with 70 percent failing to report their whereabouts to authorities and 30 percent found to be away from the locations.

A health ministry official has called on people not to rely too heavily on the results from tests conducted when they entered the country, as it is possible to get a false negative result during an incubation period.

"We want people to properly see through their quarantine," the official said.

Japan now requires all arrivals into the country to provide COVID-19 negative test results taken within 72 hours of departure and be retested at the time of entry. Even if the results are negative, people are asked to pledge they will self-quarantine for 14 days in their home, a hotel or another facility.

People are also asked to install a location tracking app called OEL upon arrival, with notification messages requesting location information and health status sent on a daily basis during the quarantine period.

Those who fail to report their whereabouts are contacted individually via a Skype video call or other methods.

The health ministry, which has asked for people to honor their pledge, has warned that penalties for noncompliance include publicly revealing names or, in the case of a foreign national, revocation of their status of residence and deportation.