Japan's government plans to allow two Myanmar diplomats in Tokyo, fired by their country's military junta for joining the anti-coup movement, to remain in the country even as credentials for one of the two is set to expire in just over a month, sources said Wednesday.

Arrangements are being made for the resident status of the two diplomats -- Aung Soe Moe, 51, and another who wishes to remain anonymous -- to be valid even after Aung Soe Moe's diplomatic credentials, issued by the Japanese Foreign Ministry, expires on July 15. 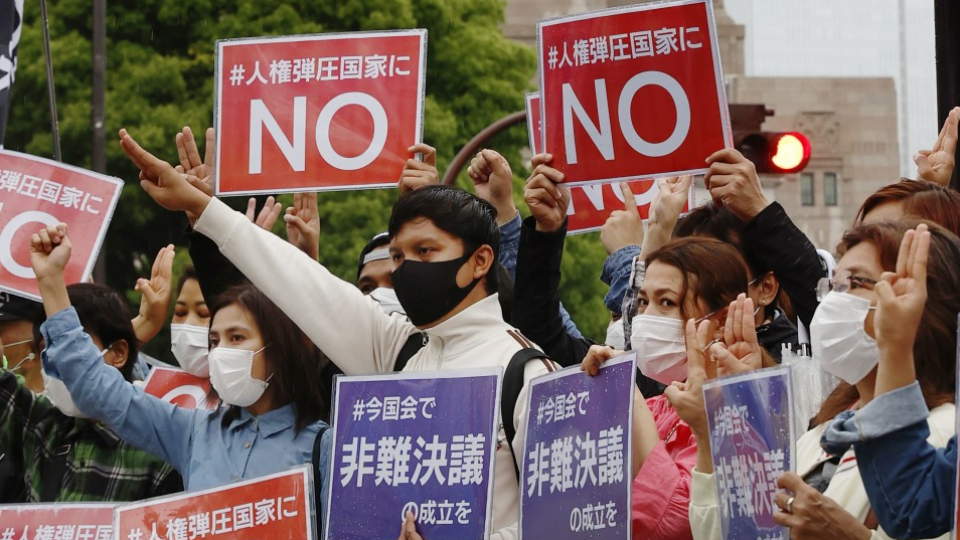 Myanmar residents in Japan stage a rally in front of the parliament building in Tokyo on May 19, 2021, against the Feb. 1 military coup in Myanmar, urging their host country to suspend official development assistance projects for Myanmar as part of international pressure on the military junta. (Kyodo) ==Kyodo

The ministry will discuss whether it can re-issue their credentials, the sources said.

The decision comes as the pair had requested that Japan maintain their diplomatic visas and credentials, citing their legitimacy as officials assigned by the democratically elected government led by civilian leader Aung San Suu Kyi, which was toppled by the Feb. 1 coup.

Foreign Minister Toshimitsu Motegi said last week that Japan has not revoked their visa status, as the ministry does "not perceive their actions as having been inappropriate."

But he stopped short of clarifying their future status at that time, saying only that his ministry would monitor the situation in Myanmar.

The Myanmar Embassy in Tokyo informed the ministry in March that the pair's diplomatic status and passports had been nullified.

The diplomats were barred from entering the embassy compound, which houses their former offices and residences, shortly after joining a civil disobedience movement against the military rule on March 6 and had since boycotted their work at the embassy.

Since leaving the embassy compound on March 11, the two have lived separately in Tokyo with the support of Myanmar expatriates.

The junta appointed replacements and asked the Japanese government to recognize them as the new diplomats. Japan has yet to decide on the request as it does not recognize a military junta as a legitimate governing body.

"As there are more Myanmar diplomats who were dismissed in other countries, Japan's decision will draw attention," a diplomatic source said.

Japan is seeking dialogue with the junta while remaining cautious about joining the United States, Britain and the European Union, among others, in imposing sanctions on individuals and groups involved in the coup.

A cross-party group of Japanese lawmakers held an online meeting the same day with the National Unity Government, an organization set up in opposition to the Feb. 1 military coup claiming to be Myanmar's legitimate government.

During the meeting, Mahn Win Khaing Than, prime minister of the parallel government, called for support for the country's return to a democratic transition and asked other countries to cut ties with the junta in a bid to achieve the goal.

The NUG was established in April by members of the National League for Democracy party led by Aung San Suu Kyi. According to local media, the military government has designated the NUG as a terrorist organization.

Yuki Kitazumi, a freelance journalist who returned to Japan this month after being detained by security forces in Myanmar, also took part in the online meeting. He was accused of spreading "fake news" regarding anti-military protests.