The coronavirus vaccination rollout for people under the age of 65 in Japan will be carried out at the same time as those with underlying conditions to help speed up the process, the health minister said Sunday.

The health ministry had already instructed municipalities to begin sending vaccination vouchers to all those eligible under 65 from the middle of June. But now, even those without underlying medical conditions will be able to get their jab upon receiving the voucher next month. 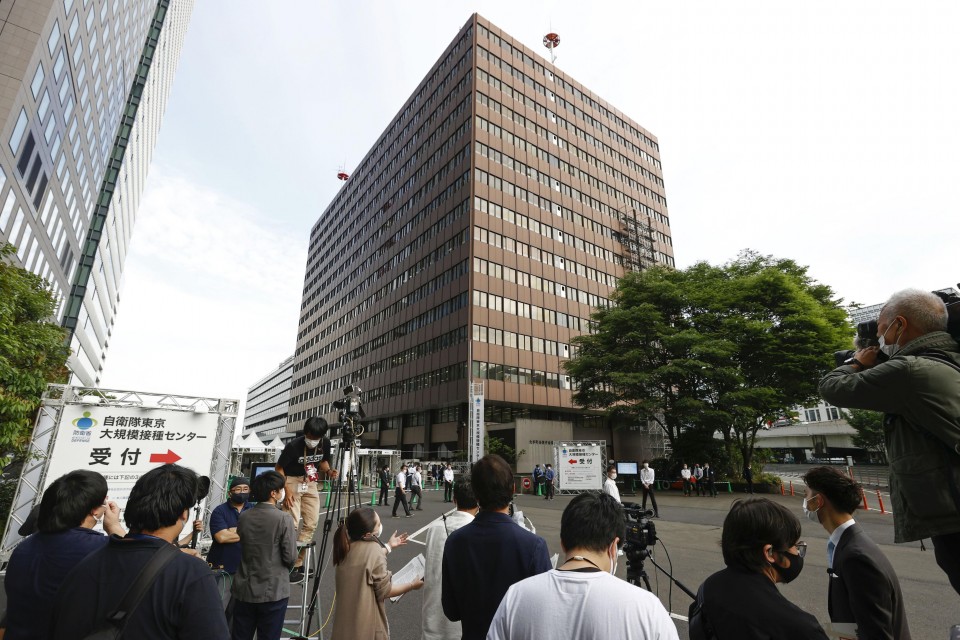 A building in Tokyo's Otemachi business area is pictured on May 24, 2021. A mass coronavirus vaccination center opened there the same day. (Kyodo) ==Kyodo

Those who qualify to receive priority vaccinations will need to report to municipalities independently, as the government has no data available as to exactly how many people are eligible.

Japan's vaccination program was launched in February for front-line health workers and expanded to those 65 and older in April. The government planned to vaccinate those with underlying conditions, those working for nursing homes and finally, the general public after finishing vaccinating the elderly by July 31.

But the government is looking to speed up the country's vaccine rollout, which has lagged behind other countries, with just 6 percent of its population having received at least one dose. With the medical system remaining strained, the COVID-19 state of emergency in Tokyo, Osaka and seven other prefectures was extended on Friday by three weeks to June 20, just over a month before the Olympics begin in the capital.

Taro Kono, the minister in charge of the country's vaccination efforts, said Saturday in an internet program that the government will leave the decision about who should be prioritized once the inoculation of the elderly is completed to the municipalities.

Tamura said he wants local governments to prepare to administer vaccinations to those eligible under 65, prioritizing those with underlying conditions.

The central government is also considering administering U.S. pharmaceutical company Moderna Inc.'s vaccine, which was approved in Japan in May, at workplaces, to further accelerate the rollout, he said.

Large-scale COVID-19 vaccination centers run by Self-Defense Forces personnel will begin full-scale operations from Monday, a week after opening, raising the maximum number of inoculations per day to 10,000 in Tokyo and 5,000 in Osaka.

The state of emergency, currently in place over the nine prefectures and Okinawa, which was recently added as the 10th prefecture, may be lifted before its June 20 expiration depending on the infection situation, but "measures must continue to be taken even after it is lifted to prevent a resurgence," Tamura said.